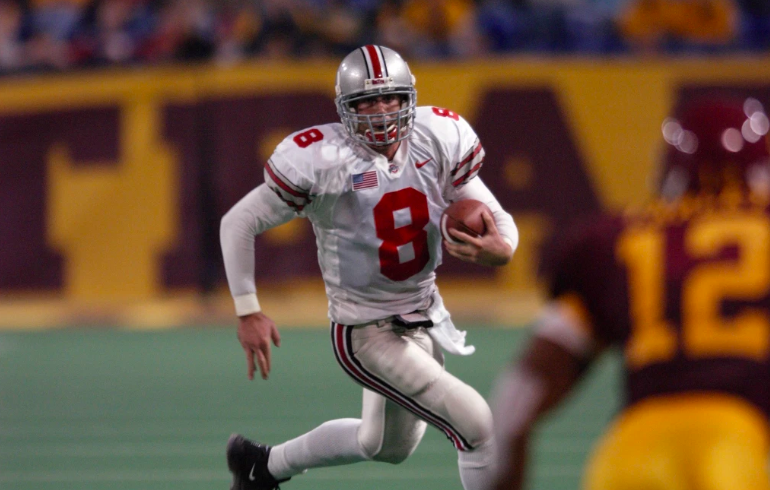 Ohio State begins its season against Minnesota in six days. It will be the sixth time the Buckeyes have played the Golden Gophers in Minneapolis since 2000.

To count down the six days until kickoff, Buckeye Sports Bulletin will revisit Ohio State’s past five road trips to the Twin Cities, detailing each game’s defining moments as well as its box scores and statistics.

The headline: Buckeyes Change Their Luck, Scrape By Gophers

After a heartbreaking loss at Penn State, the Ohio State football team limped into the crucial month of November and approached the proverbial fork in the road at Minnesota on Nov. 3 — out of time and tines.

The anticipation for a much-needed bounce-back win built throughout the day as the Buckeyes prepared to play a night game that was beamed to the country on ESPN. So did the good news, mainly that Big Ten contenders Michigan and Purdue had been knocked off.

A win over the pesky Golden Gophers would have proven true John Cooper’s old saying about college football: One week you’re sipping the wine, the next you’re stomping the grapes. Only this time it was the other way around in a never-dull 31-28 win before 45,407 rowdies in the Metrodome.

Minnesota started the game with football, taking the 19-play opening drive (yes, you read that right) 67 yards down the field and into Ohio State territory. The almost nine-minute possession ended with kicker Dan Nyastrom putting a 30-yard field goal through uprights.

It didn’t take long for Ohio State to answer. The Buckeyes had a long drive of their own — 12 plays for 85 yards — and chewed up over five minutes of the game clock. Ohio State made its way inside the Minnesota red zone, and Wells punched in his first touchdown of the night from 2 yards out.

After stopping Minnesota on its next drive, Ohio State’s offense took the field with a favorable field position. Quarterback Steve Bellisari led the Buckeyes to their next score, connecting with wide receiver Darnell Sanders for a 14-yard touchdown pass.

Minnesota struck quickly in its next possession. The Golden Gophers used seven plays to cover 78 yards before running back Thomas Tapeh ran in a 3-yard score.

The defense would make a stop on Ohio State’s next time on offense. Minnesota retook the ball, and Nystrom hit a 44-yard field goal as time expired.

Minnesota’s defense picked up another stop at the beginning of the second half. The Golden Gophers took possession just outside of Ohio State territory. The offense wasted no time, requiring only one play to put points on the board. Running back Tellis Redmon took his carry 52 yards to the end zone and put Minnesota back on top.

An excellent kick return set Ohio State up with a great field position in their next possession. After eight plays and 55 yards, the Buckeyes stood at the Minnesota goal line. Once again, Wells ran behind the Ohio State offensive line and into the end zone for a 1-yard score.

Ohio State extended its lead after Bellisari found wide receiver Chris Vance for a 36-yard touchdown pass at the beginning of the fourth quarter. Kicker Mike Nugent added three more points for the Buckeyes via a 35-yard field goal to put the team up 11 points with 4:17 remaining.

Minnesota continued to fight, stringing together an impressive nine-play, 44-yard drive that ended with quarterback Asad Abdul-Khaliq running in a 2-yard touchdown. However, the Golden Gophers couldn’t find any more points in the contest, and the Buckeyes went home the victors.