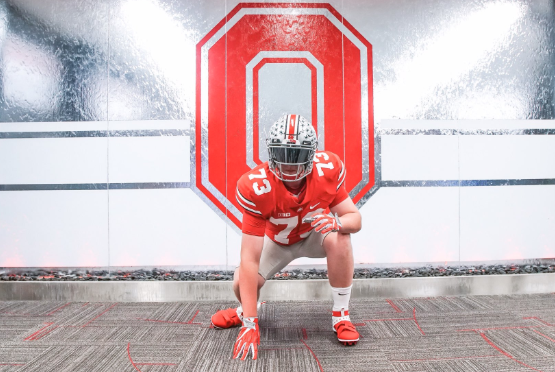 While the Buckeyes are away from football practices for the week with the university on spring break, Ohio State’s action in recruiting remains a constant.

Between signal callers from each of the next two cycles setting spring trips for camp at the Woody Hayes Athletic Center to two top targets along the offensive line including OSU in major list cuts with a visits on the horizon, BSB breaks down the latest on the trail.

Dependent on numbers, Ohio State might be open to one more quarterback for its 2020 recruiting class, which has had Scottsdale (Ariz.) Chaparral four-star commitment Jack Miller since July 1. In the meantime, as they look to build their depth at the position, the Buckeyes have placed some focus on getting ahead for the next two cycles.

In possession of 22 offers — head coach Ryan Day and company extended a scholarship Dec. 11 — McCarthy is among the few signal callers OSU has targeted for the 2021 class. Recruited by Michael Yurcich at Oklahoma State before he joined the Buckeyes in his post as passing game coordinator/quarterbacks coach, McCarthy has familiarity with Day and the coaching staff as he builds his relationship further.

Ohio State’s recruiting efforts at quarterback delves deeper than rising juniors such as McCarthy. For the 2022 class, the Buckeyes have already taken interest in several signal callers.

The few prospects include two from Ohio in Jeffery Beverly of Columbus Franklin Heights and Chase Harrison of Dayton Centerville. Neither has an offer, but OSU is slated to host each for an upcoming date in the spring.

Beverly last visited Ohio State for its Sept. 22 game against Tulane, a 49-6 rout at Ohio Stadium. The 6-4, 195-pounder told BSB he makes his return March 23 for the Buckeyes’ fifth practice of spring camp.

Harrison (6-2, 185), on the other hand, holds an offer from Louisville (June 3) while powerhouse programs such as OSU watch closely. After he last took a trip to campus Nov. 24 for Ohio State’s 62-39 victory against Michigan at Ohio Stadium, his return visit is April 5 — the Buckeyes’ 11th practice of spring camp.

OSU discovered both 2022 arms last June during its one-day position camps over the summer.

Ohio State entered Aurora (Colo.) Eaglecrest 2020 four-star center Reece Atteberry‘s recruitment June 24 with an offer, following with an Oct. 6 visit. The 6-5, 280-pounder made a sizable cut to his list of 20-plus scholarships Monday and included the Buckeyes among the final five.

Atteberry is the 247Sports composite’s No. 348 overall prospect, No. 4 center and No. 5 player in Colorado for 2020. He is slated to make his Columbus return March 23 for the fifth practice of spring camp.

Thank you to every coach that has taken the time to recruit me and everyone that has helped me get to this point. 🔵〽️🌽☘️🙆🏼‍♂️ (These are my top 5) @savageedits15 @SixZeroAcademy @raptorathletics pic.twitter.com/zl5EPYkeaR

Also on Wednesday in 2020,  Louisville (Ky.) Christian Academy four-star offensive tackle John Young included Ohio State among his top six schools going forward. He picked up an offer from the Buckeyes during an Oct. 13 visit for OSU’s 30-14 victory against Minnesota at Ohio Stadium.

With a return trip to see the Buckeyes is likely but not yet finalized, Young’s process is worth keeping tabs on — although OSU reached four offensive linemen for the class Monday when Norwalk, Ohio, offensive tackle Trey Leroux (6-8, 320) committed. The 6-6, 280-pounder is the 247Sports composite’s No. 306 overall prospect, No. 29 offensive tackle and No. 4 player in Kentucky for 2020.