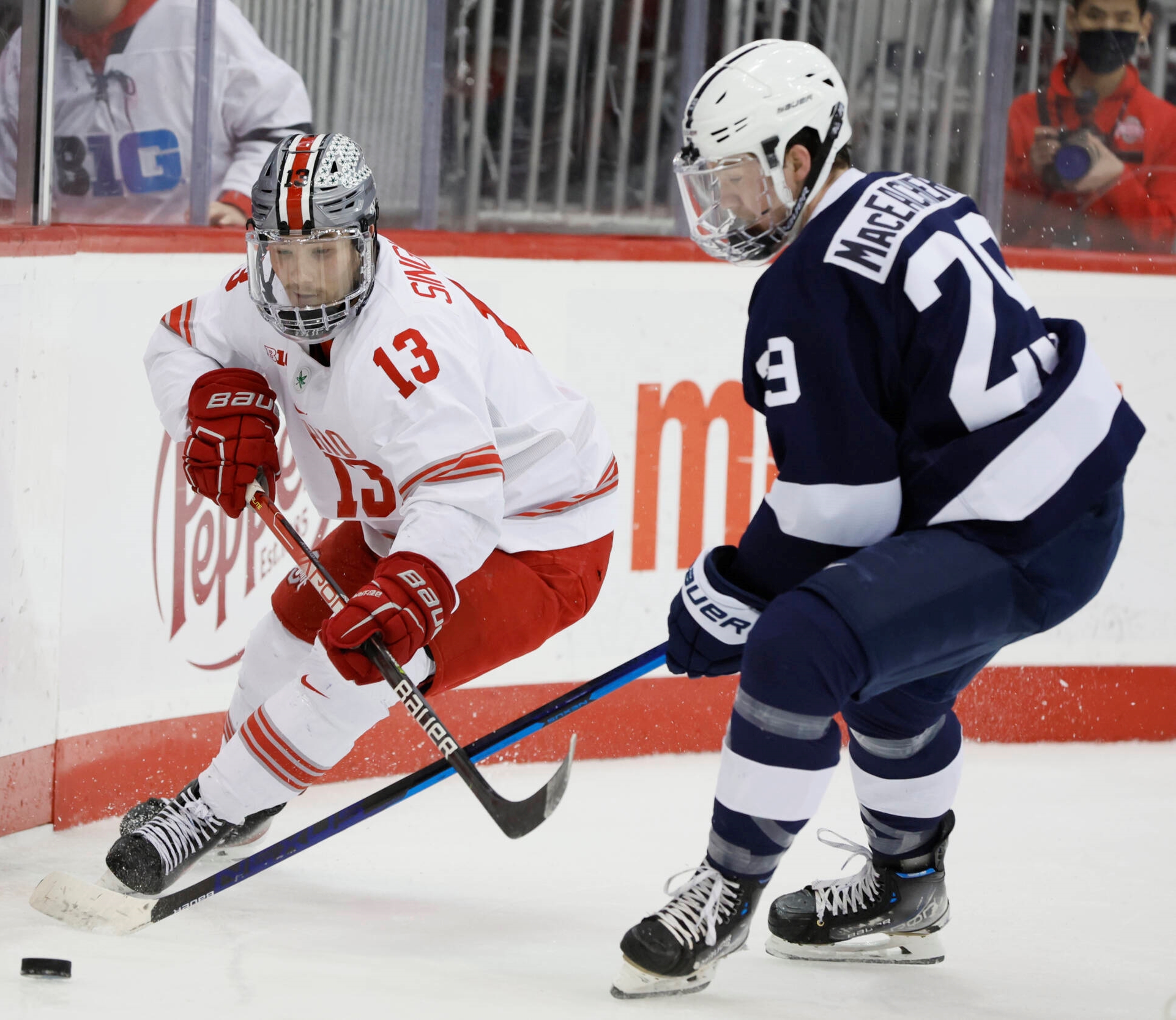 Penn State defeated Ohio State 2-1 on Sunday to win the final two games of the best-of-three Big Ten quarterfinal series and put a serious dent in the Buckeyes’ postseason hopes.

The Buckeyes pulled goalie Jakub Dobeš for the extra attacker with two minutes left to no avail.

“When you lose a game like that, a playoff series it’s disappointing,” OSU coach Steve Rohlik said. “I take things personal, as far as my job. I felt we were ready and we just weren’t quite good enough. They got a couple one-goal wins when they needed them, and we didn’t have enough firepower to get it done.”

It was a bitter end for the Buckeyes.

In a month’s span they went from first place in the Big Ten and a sure spot in the national tournament to a quick playoff exit.

Now, they are left hoping and praying other results from around the country over the next two weeks go their way to have a chance of their name being called during the NCAA selection show on March 20.

Ohio State is 15th in the PairWise rankings that simulate the formula used by the selection to fill the 16-team field.

The College Hockey News’ Pairwise Probability Matrix gives Ohio State a 33 percent of making the NCAA tournament. Its chances of remaining in the top 15 are 65 percent but it needs all the teams below them to lose their conference tournaments.

Penn State entered the playoffs knowing its only path to the NCAA tournament was earning the automatic qualifier for winning the Big Ten tourney.

The Nittany Lions play at top seed Minnesota on Saturday in a semifinal.

For the Buckeyes, advancement over Penn State to the semifinals against Minnesota might have been enough to earn one of 10 at-large bids even with a loss to the Golden Gophers, ranked fourth in the PairWise.

The Buckeyes undoing was there final four games of the regular season which resulted in being swept in two games series each by Minnesota and Michigan (No. 2 PairWise).

It should be noted the Buckeyes have played the past seven games (1-6-0 record) without injured freshman star defenseman Mason Lohrei.

If the season were to end without an NCAA bid, it will still be special for Rohlik coming off a COVID-19 shortened 7-19-1 record last season.

“Sometimes you get so caught up in a moment, what’s today and the next day, you don’t have time to think about what these guys have accomplished,” Rohlik said. “No one gave us a chance. That was pretty evident where the coaches in this league put us — dead last, no chance. I think we proved we’re a pretty good hockey team. These guys have banded together to say we’re going to show, we’re going to compete, and we won a lot of games.”

The series started as if the Buckeyes might make quick work of the visitors but to the credit of the pesky Nittany Lions, they hung tough in the first game and likely gained a ton of confidence despite the 4-3 setback before a turnout of 2,039.

OSU built a 3-0 lead by the early stages of the third period before Penn State made it interesting and forced the Buckeyes to hold on.

“A win’s a win; we’ll take it. Playoff hockey,” Rohlik said. “You have to play bell-to-bell. That’s a good hockey team and they’re never out of it. I give our guys credit. They played a pretty good game tonight. Kind of did our job and hung on there at the end.”

Standout freshman Georgii Merkulov opened the scoring at the 16:00 mark of the second period on the first of his two breakaways. CJ Regula’s stretch pass set him free.

Quinn Preston extended the lead to 3-0 at 2:19 of the third period. Cam Thiesing had to the pinpoint pass that sent Preston on the breakaway for his seventh goal.

But Merkulov scored what proved to be the winner when he gathered a loose puck and skated in alone for his 20th goal of the season at 16:52 to make it 4-2. His seven game-winners lead the NCAA.

However, Kenny Johnson cut the deficit to 4-3 only 18 seconds later.

It was nervy time from there as PSU played the final 2:17 with an empty net but Dobeš, who made 49 saves, withstood the challenge.

Preston was not surprised that the Nittany Lions kept coming at them.

“I just think it’s the playoffs,” he said. “Everyone wants to play harder and win every battle. It’s just playoff hockey.”

In a must-win situation Saturday, the Nittany Lions got mission accomplished, taking the lead three times with the last holding as the 3-2 final 2,198 fans.

Penn State went ahead 1-0 on a goal by Lugris with 29 seconds left in the first period.

Michael Gildon potted a power-play goal at 13:55 to make it 1-1. The initial shot by Travis Treloar hit the post but Gildon was there for his third goal. Will Riedell got the secondary assist.

Kevin Wall put PSU up 2-1 at 17:12 of the second but in the third period McWard scored from the point at 9:33 to tie it 2-2 with assists to Kamil Sadlocha and Ryan O’Connell.

After a Buckeyes’ power ended at 17:08 of the third period, Ryan Kirwan netted the winning goal for the Nittany Lions 11 seconds later.

OSU had an extra attacker on for the final 75 seconds but could not get the equalizer.

Dobeš made 43 saves while Liam Souliere made 33 for PSU.

“It’s two teams battling to the end,” Rohlik said. “They didn’t want their season to end and they played like it. I thought we got better as the game went on and thought we played hard in the third to tie it up. Unfortunately, they got one more than we did.”

Down To The Wire

The decisive game Sunday was scoreless through 20 minutes.

The Nittany Lions led in shots, 8-4, after the first period and had the lone power play.

Ohio State had two bad line changes in the second period. The first resulted in a 2-on-0 in which Dobeš made a great stop on Wall.

The second at 13:30 gave Penn State the lead when Kirwan was alone in the right circle to rocket a shot past the glove of Dobeš.

Ohio State was grasping for any sign of life as the period drew to a close. The Penn State defense was smothering and five throaty Nittany Lions fans were louder than the shockingly small (1,188) and quiet Buckeye contingent.

Then from nowhere, Jake Wise whipped a cross-ice to Tate Singleton for his 10th goal at 18:52 to send the game tied 1-1 into the fateful third period.

Merkulov’s 20 goals are tied for the sixth-most in program history by a rookie and the most since Brian Loney had 21 in 1992. …  Dobeš’ 21 wins are tied for fifth in program history in a single season, with current goalie coach Dustin Carlson (2009) and John Dougan (1983). His 1,010 saves this year are sixth all-time, four behind Carlson (2009). … The Buckeyes will continue practicing while awaiting their fate.