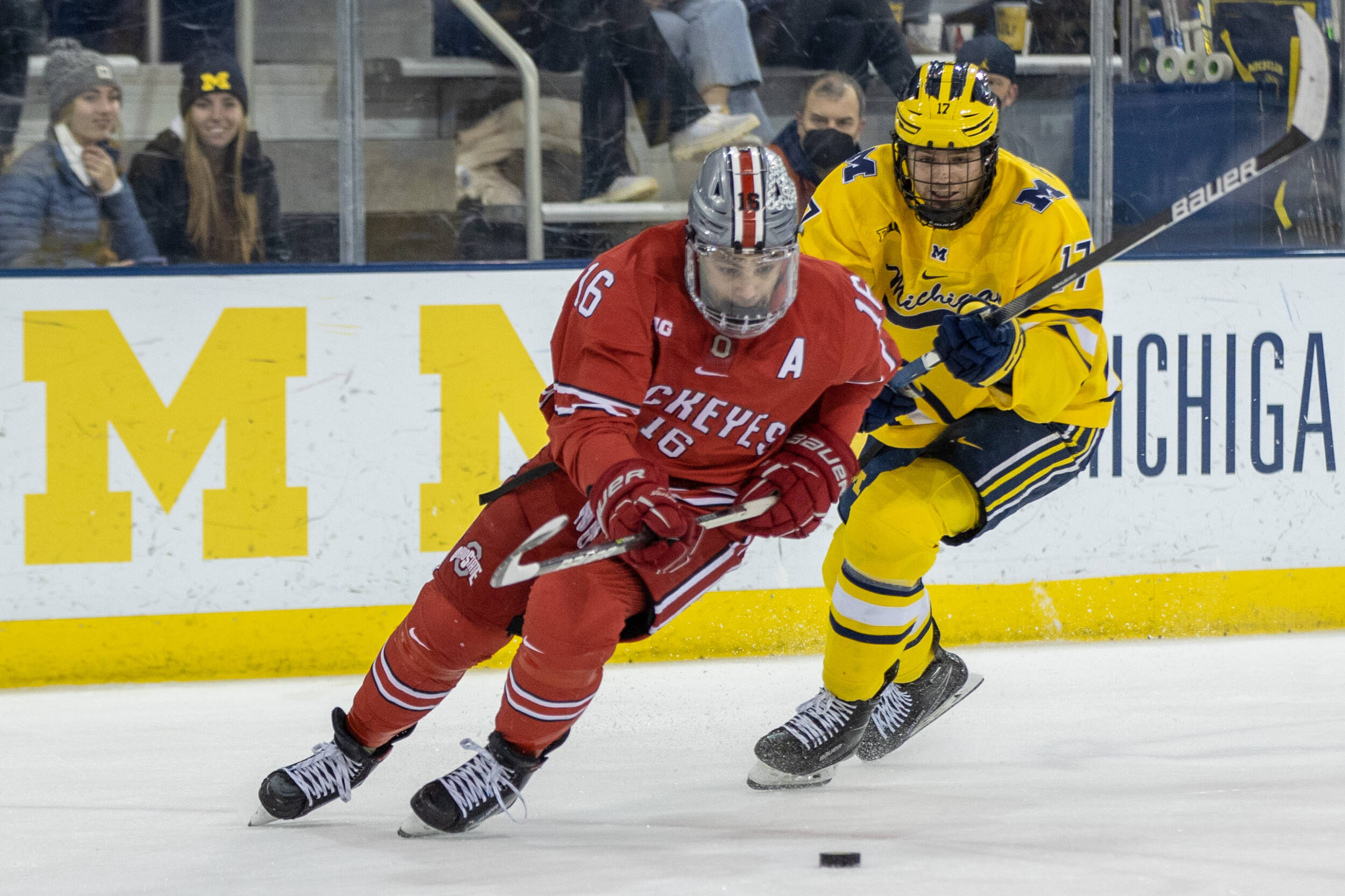 Ohio State’s secure spot in the NCAA tournament is starting to slip away, as is a possible top-three finish in the conference, after a second consecutive lost weekend.

While it’s no disgrace losing to a pair of top-10 teams, the fact each were missing four players due to Olympic commitments doesn’t bode well if the Buckeyes face them further down the road.

Ohio State three weeks ago was the surprise leader in the conference after being picked for last in the coaches’ preseason poll.

Now, with a four-game losing streak they must regroup for the conference quarterfinals, which they’ve earned the right to host a best-of-three series March 4-6.

Heading into the final regular-season weekend of Feb. 25-26, the Buckeyes can only watch, knowing the best they will finish is third or fourth.

Michigan has 51 points, followed by Minnesota with 49. The Buckeyes completed the schedule with 42 points in 24 Big Ten games, good for third. Notre Dame is just a point back and hosts the Wolverines for two games.

As it stands, the Buckeyes would play Penn State in the quarterfinals.

OSU over the past two weeks has dropped from a tie for 10th in the PairWise rankings to 13th, meaning they are close to being a bubble team for the 16-school NCAA field.

It also means the Buckeyes can’t afford to lose in the quarterfinals since the margin for error is decreasing.

Michigan is first in the PairWise. Minnesota is fifth and Notre Dame 11th.

The Buckeyes played without injured freshman Mason Lohrei, one of the top defensemen in the country, for both games in Ann Arbor after sitting the final Minnesota game.

He was sorely missed as the Wolverines went 2 for 5 on the power play in the opener to pull away before a sellout crowd of 5,800 at Yost Ice Arena.

Kamil Sadlocha opened the scoring for the Buckeyes with 20 seconds left in the first period. Michigan scored three in row before Gustaf Westland made it 3-2 at 7:40 and Travis Treloar at 4:02 of the third tied it 3-3.

Freshman goalie Jakub Dobeš made 32 saves for the Buckeyes.

“This was a tough loss on the road,” Ohio State coach Steve Rohlik said. “Basically, another one-goal game. In games like that, it often comes down to the team that makes the least mistakes. We took too many penalties and they won special teams tonight.”

In the rematch in front of another packed house, the OSU penalty kill was 6 for 6, including a five-minute major, but Erik Portillo had a 30-save shutout while Dobeš made 33 saves.

Michigan scored once in each period.

“This was a hard-fought game,” Rohlik said. “It was pretty even start to finish; we just couldn’t get one by the goalie. We did enough to get home ice and we are looking forward to being in The Schott for the first round of the playoffs.”