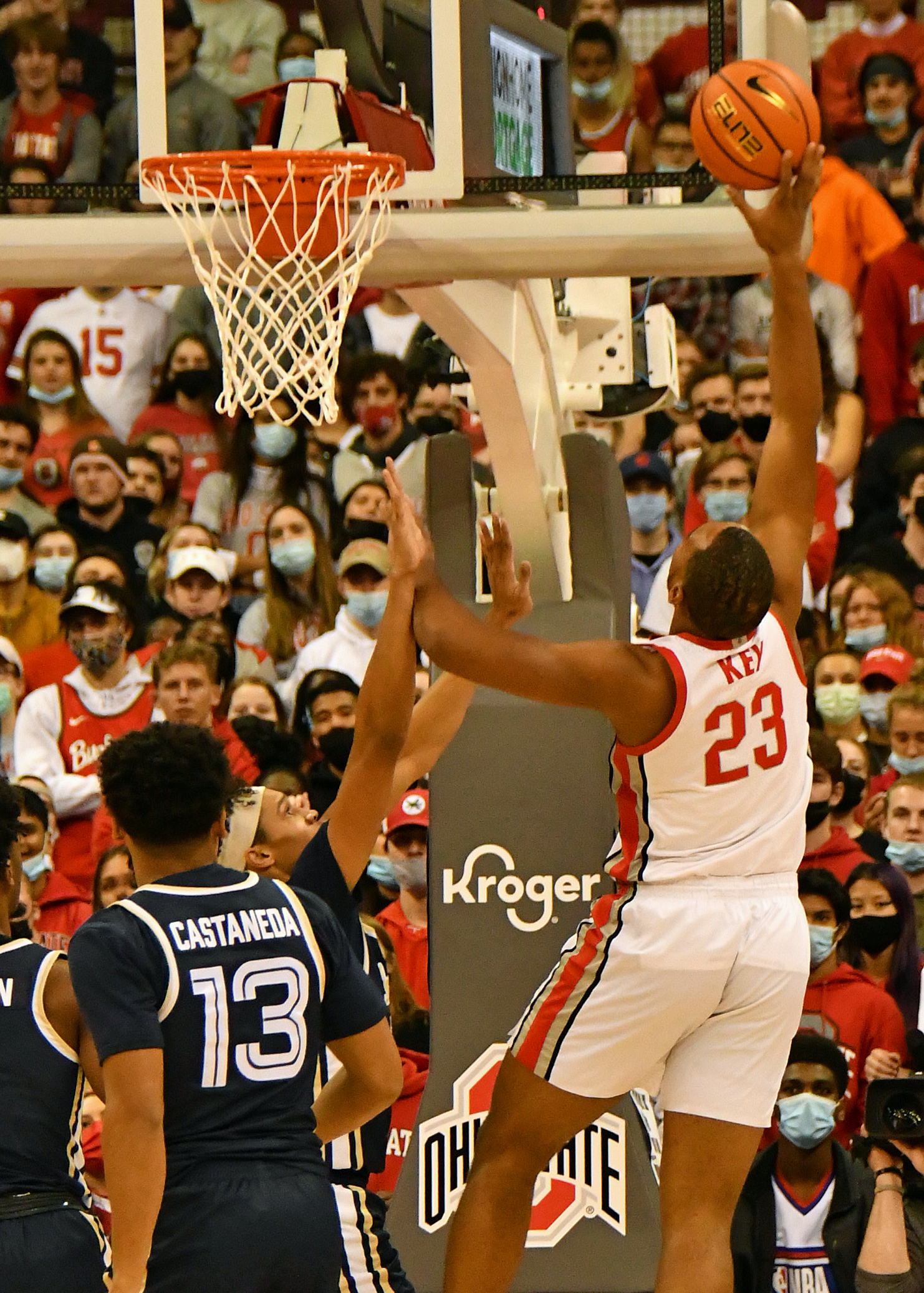 In its haste to return to regular season play, Ohio State must have forgotten to take the lids off its hoops before it tipped off on Nov. 9 in a season-opening matchup with the Akron Zips. It’s an easy mistake to make, but it wasn’t until the first television break of the season that Ohio State’s shots began to fall again – save for those of forward Zed Key, who must have had the key to the hoop, scoring Ohio State’s first six points of the game and drawing a foul in the post to send the game to its first break.

It was that kind of half for Key. The New York native, playing his second season for the Buckeyes and his first in front of a Value City Arena crowd, the player anointed by fans as “The Big Fella” looked every bit his 6-8, 245-pound frame as he bullied the Zips in the post repeatedly, scoring 8 points on the half on 4-of-6 shooting.

He wasn’t alone in his post efforts, though, as the Buckeyes fought their way to a last-second 67-66 victory. The first scorer of the game for OSU of the non-Key variety is his new partner in the post – at least for as long as Kyle Young’s health is in question – E.J. Liddell. Liddell’s dunk out of the break snapped the spell for the Buckeyes, though the entire first half saw Ohio State shaking off some of the offseason rust offensively.

That rust seemed to apply to every Buckeye but Key to open the game, both in form and function. Ohio State shot 15 of 30 from the field in the first 20 minutes of play but was often moving without much of a stated goal. A good portion of the makes came from improvisation and hustle plays, with the frontcourt finding work in second-chance points as frequently as any other strategy.

It looked in part like an offense operating for the first time in a regular season game without its star guard, perhaps because it is. Ohio State knew that the departure of Duane Washington Jr. was going to sting, especially early in the season as it worked in new faces in both backcourt spots, and it downright burned to open the game against the Zips. Penn State transfer Jamari Wheeler and second-year freshman Meechie Johnson Jr. earned the starting nod with true freshman Malaki Branham, Eugene Brown III and Cedric Russell contributing off the bench early and often, but none of the platoon members looked particularly keen on shooting.

The Buckeyes weren’t faced with turnover woes as they often have been with new guards, rather they met something of a malaise, struggling to initiate the offense against Akron’s zone defense. Key was just about the only OSU player in the first half that showed much interest in creating his own offense, but the system itself wasn’t exactly springing players open as the young players struggled with what they were seeing. A pair of Justin Ahrens three-point tries, one for Liddell and several more Liddell hustle plays (he finished the half with 13 points and 8 rebounds) were just about the only open shots the Buckeyes saw in the first half.

The second half opened with just about the exact opposite. The Buckeye offense spawned open on its first three possessions but failed to convert any of the shots, and then the turnover bug bit Key in the post. Off the transition, Akron hit a second straight three to cap an 8-0 half-opening run, knotting the game at 36 and forcing Holtmann to signal a timeout.

Just as he had in the first half, it was Liddell that sparked the Buckeyes again out of that break. He cashed in on an open jumper out of the timeout and produced perhaps the highlight of the evening with an authoritative block at the rim, followed by a drive to the hoop and another bucket at the other end to put the Buckeyes back out in front.

As Ohio State fiddled with lineups in hopes of finding some more consistent scoring, the offense never got a whole lot prettier. After Liddell’s second bucket at the 17:22 mark, Ohio State went more than six minutes without scoring from the field, hitting four free throws but struggling mightily to create or hit any shots as Akron continued to battle. Liddell finally snapped the streak with another layup at the 11:17 mark, but the offensive lethargy ranged from questionable to flat-out hard to watch.

It wasn’t until Brown corralled a rebound and laid it in that someone other than Liddell actually scored from the field in the second half for the Buckeyes, and that was well after the game clock had ticked under 10 minutes.
Like just about everything else the Buckeyes did on offense against the Zips though, it didn’t break the backs of John Groce’s squad, which took every punch Ohio State offered and responded with shots of its own, jumping out to a 55-52 lead with just over five minutes to play and a 57-55 lead a possession later after Malaki Branham hit from downtown to tie the game.

As the crowd came alive for the first time all night in the sleepy Value City Arena, the underdogs from up north just kept swinging. A rip and run that led to a Liddell transition layup with a foul garnered the largest reaction of the night from the crowd (though he would not convert the three-point play) but Akron answered in turn with an Ali Ali three-pointer from the corner to reclaim the lead, 60-59.

After another Zips bucket to extend the lead to 62-59, it was the first half hero’s turn to bounce back, with Key clearing out space on the inside and converting his first bucket of the period to cut the deficit to one. He came up big on the defensive end a possession later and earned a stop, setting up a Branham layup that put the Buckeyes back in front 63-62.

Following a defensive stand, Key knocked home another put-back to extend the Buckeye lead to 65-62, only to see Ali hit a dagger of his own from downtown with the foul, an incredible four-point play to put Akron back up by a point with only seconds to play.

What followed can only be described as an incredible act of self-fulfilling prophecy. When asked by this reporter before the season who he would want to take the final shot in a one-score game, Key scoffed at the question as if it was a grave insult to consider anyone but him.

Ohio State did. It passed Key with just seconds to play, he posted up and he finished at the rim for his 14th and final points. He’s nothing if not honest.