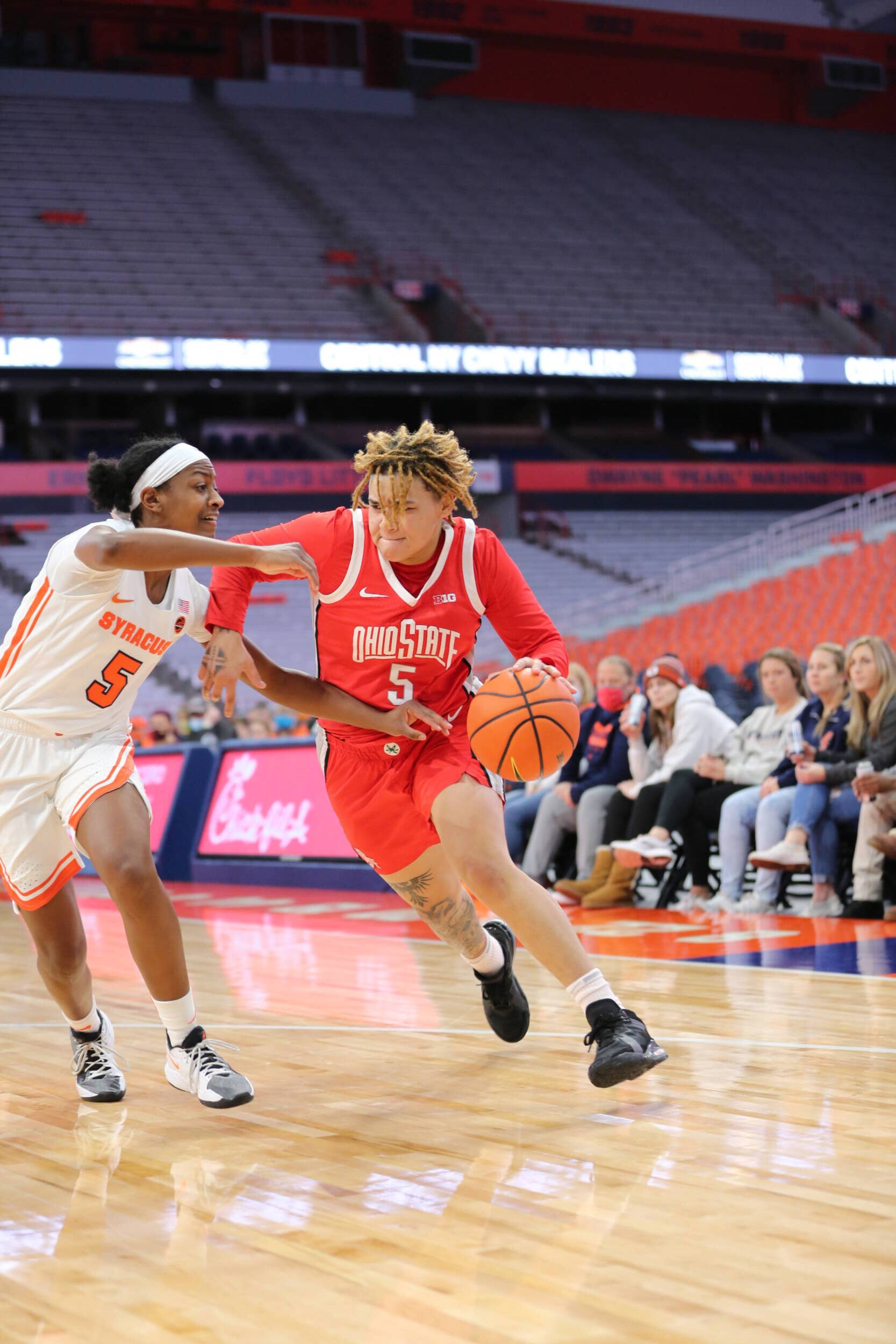 Headed on the road for a two-game trip away from Value City Arena, Ohio State (5-1) ran into trouble for the first time this year, dropping its first game of the season to Syracuse, 97-91.

A close contest throughout, Syracuse began hammering the Buckeyes from beyond the arc in the third quarter, at one point connecting on four straight three-pointers to take a 63-57 lead, eventually up 65-58 at the end of the third.

The Orange continued their barrage on the offensive end, scoring 32 points in the fourth quarter. A technical foul by sophomore guard Kateri Poole with just over three minutes remaining sent Syracuse to the line where the Orange went up 81-69. Ohio State attempted a comeback, never trailing by more than 14, but were never able to get the deficit to fewer than six points in the 97-91 loss.

The Buckeyes looked out of sorts in the first few minutes with a turnover, a pair of missed baskets and two missed free throws, down 3-0 and held scoreless over two minutes into the game.

Junior forward Rebeka Mikulasikova got Ohio State on the board first and helped kick off a 13-0 run, giving the Buckeyes a 13-3 lead. Poole helped spur the run with two steals, while Mikulasikova knocked down a pair of free throws after getting fouled following an offensive rebound.

The Orange responded with a 9-0 run, forcing head coach Kevin McGuff to call a timeout, and the Buckeyes finished the first quarter up 23-17.

While the first half has been Ohio State’s strength this season, outscoring opponents 244-132 through the first five games, Syracuse pushed the Buckeyes in the first 20 minutes, capitalizing on a 7-0 run to take a 29-27 lead.

Syracuse sophomore guard Teisha Hyman was the biggest reason the Orange hung with the Buckeyes, scoring 18 first-half points on 7-of-11 shooting. She led all scorers in this contest with 30 points on 12-of-18 shooting, including 4 of 6 from beyond the arc.

After the Orange took the lead, senior guard Taylor Mikesell knocked down a three-pointer to regain it for Ohio State. The teams continued trading baskets until the half, where the Buckeyes found themselves with a 39-36 lead.

Coming out of the half, Syracuse scored the first five points to take a 42-39 lead, but Ohio State battled back with a Mikesell three-pointer to take a 44-42 lead. Following a timeout with under five to go in the third, the Buckeyes began playing with some juice on defense, at one point turning Syracuse over on three straight possessions and taking a 50-48 lead.

From there, however, the rims appeared to widen, as the teams scored on eight consecutive possessions, ending with a Mikesell miss as the Orange led 59-57. After the teams stayed close throughout the contest, the Orange began to pull away at the end of the third, finishing the quarter on a 7-1 run to take a 65-58 lead.

The Buckeyes struggled from beyond the arc for the first time this season, finishing 10 of 31, and 33 of 70 (47.1 percent) from the field overall, while Syracuse shot 39.1 percent (9 of 23) from three-point range. Sheldon led Ohio State with 23 points.

The Buckeyes will stay on the road to face Purdue on Sunday at 2 p.m.