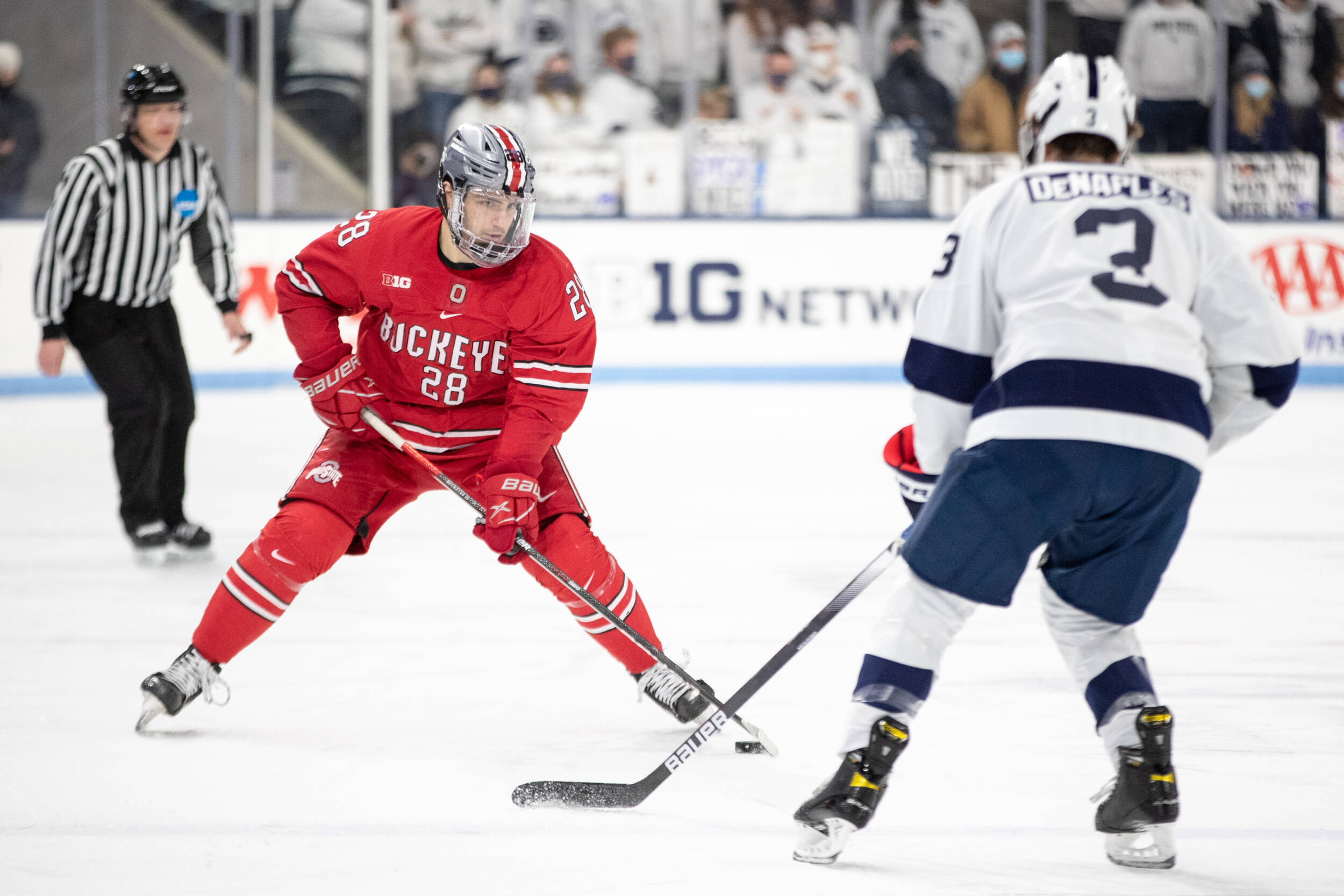 Ohio State has become known for its late-game rallies this season. The Buckeyes are now building a reputation for their comebacks in series as they push toward an NCA tournament berth.

For the second time in three weekends, the Buckeyes began a series by losing a point beyond regulation then responding the next game with a victory to take four of six points from a Big Ten opponent.

The latest was in University Park, Pa., when host Penn State and the No. 12 Buckeyes skated to a 2-2 tie on Friday before the Nittany Lions won the shootout, 2-1, to earn the extra conference point.

“It was definitely good to bounce back after a close one last night,” said senior Jake Wise, who scored twice. “We brought our ‘A’ game tonight and I think that showed on the scoreboard.”

The Buckeyes, 10-1-2 in their past 13 games, are second in the Big Ten with 37 points to Michigan’s 39 through 18 of 24 conference games. Minnesota, which has played 16 games, has 31 points and the Buckeyes are comfortably ahead of fourth-place Notre Dame (26 points in 16 games).

OSU dropped a spot to 10th in PairWise rankings that mimic the selection criteria for the 16-team NCAA tournament.

The Buckeyes face the same situation this weekend when they host Wisconsin on Friday (7 p.m.) and Saturday (8 p.m.) at Value City Arena. The Badgers are sixth in the Big Ten with 16 points.

OSU will then complete its regular season home schedule against Minnesota (11th PairWise) on Feb. 11 and 12.

The Buckeyes got one point from Friday’s game and the Nittany Lions got two by taking the shootout in four rounds. On Jan. 14, the Buckeyes lost 3-2 in overtime to claim a point then downed the Fighting Irish 4-1 the following game for the full three points in that game.

Penn State opened the series’ scoring at 4:51 of the first period on a goal by Danny Dzhaniyev. Cam Thiesing tied it for the Buckeyes at 8:05 with a redirection of a shot by James Marooney. Mason Lohrei also assisted.

“We were fortunate to get a tie,” OSU coach Steve Rohlik said. “We didn’t play well enough to win and didn’t do enough of the things we need to do to be successful.”

After the 3-on-3 overtime, Eric Cooley scored in the third round of the shootout, but the Nittany Lions countered and then scored the lone goal of the fourth round to end it before 6,059 fans.

Dobeš made 46 saves, including 20 in the third period and overtime combined.

“They played their best game and it wasn’t our best night. A lot of that was on us,” Ohio State graduate captain Will Riedell said.

The Buckeyes scored twice in each period to quiet the crowd of 6,229. Wise scored the first two goals and added an assist, Dunlap scored and had an assist and Quinn Preston and Michael Gildon each got two helpers to back Dobeš, who made 19 saves in the third period.

“This was a good bounce-back win and a great win on the road,” Rohlik said. “We are looking forward to getting back home for our next four games.”

Wise from Riedell and Gildon made it 1-0 at 12:10 of the first period and Wise potted his ninth of the season at 17:37 via Dunlap and Gildon.

Dunlap scored off a pass by Thiesing at 1:58 of the second with Wise drawing the secondary assist. Georgii Merkulov extended the lead to 4-0 at 12:03 off the rush. The freshman leads the Buckeyes with 15 goals and 28 points. Preston and Marooney assisted the tally.

At 1:05 of the third, Lohrei netted a power-play goal from Cole McWard and Preston and the final goal was by Tate Singleton at 14:41 from Travis Treloar and Gustaf Westlund.

Dobeš is 18-6-2 with a 1.98 goals-against average and a .938 save percentage. He has 30-plus saves in each of the past eight games. … Saturday was the first 50-plus save game for a Buckeye since Christian Frey had 56 at Penn State Jan. 20, 2017, and the 16th game with 50-plus saves for a Buckeye goalie in program history.  … Penn State was shutout for the first time since January 2020. … OSU has allowed two or fewer goals in 20 games and the team GAA is 2.07. …   The Buckeyes are averaging 3.64 goals a game and have eight games with more than four goals. … Lohrei, a freshman defenseman, is second on the team with 24 points and first with 21 assists.