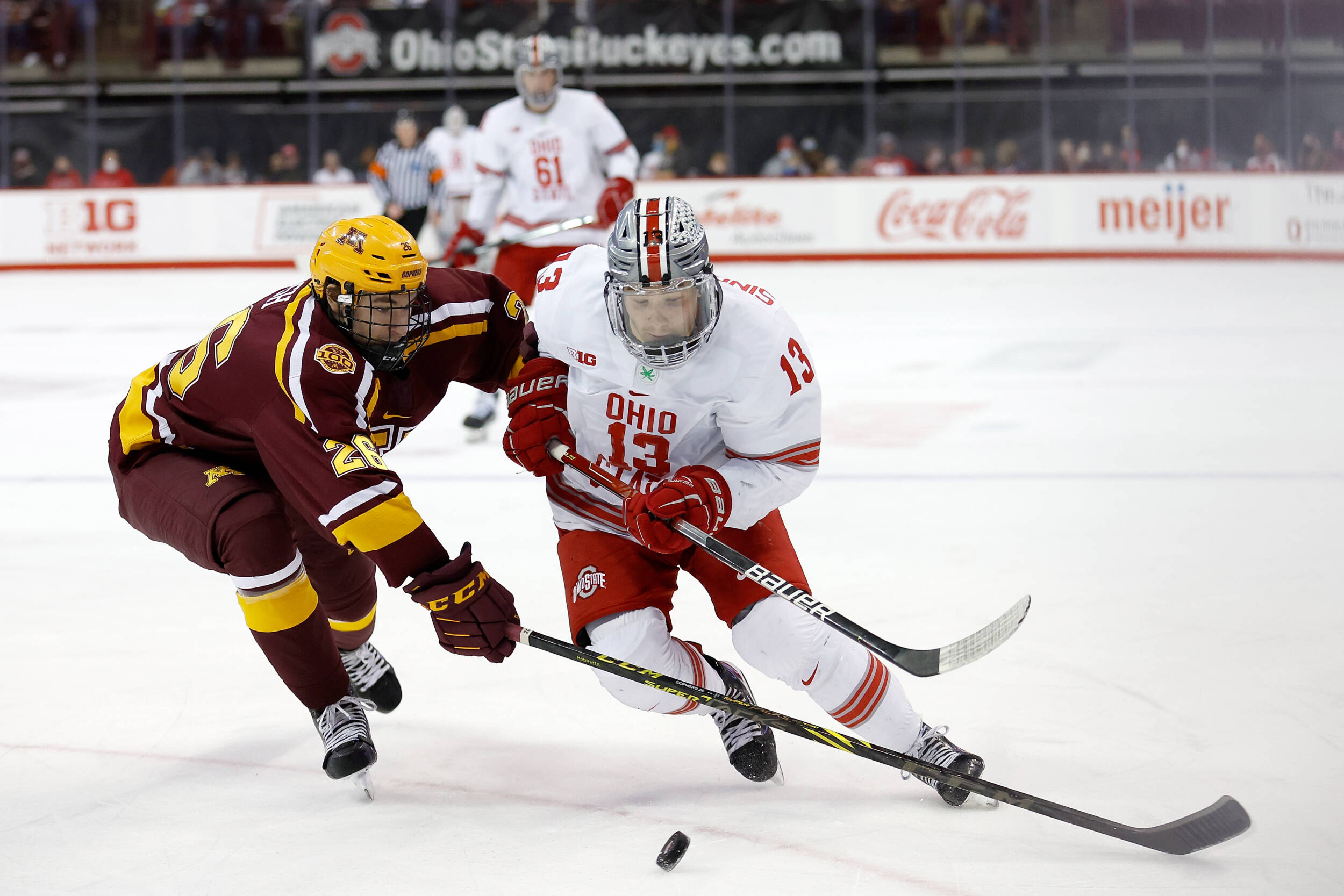 The Buckeye Express came to a screeching halt over the weekend when Minnesota visited Value City Arena and came away with 3-2 and 5-1 victories to likely squash Big Ten regular-season title hopes for Ohio State as well as put its NCAA bid in peril.

They did not have overwhelming third periods nor were they able to bounce back from dropping points in the first game of the series to gaining redemption in the rematch as the Buckeyes have done so often this season.

It was a particularly galling loss on Saturday as the seven seniors – Eric Cooley, Grant Gabriele, Quinn Preston, Ryan O’Connell, Will Riedell, Gustaf Westlund and Jake Wise – were recognized pregame, then the Buckeyes went out and allowed a goal in the first 45 seconds.

Ohio State coach Steve Rohlik summed up the game but might as well have been talking about the series when he said, “You go into it and have seven seniors that are playing tonight and you want everything for them and everything for the team. Obviously, the script went sideways right from the start. They scored in the first minute.

“We just weren’t ourselves. I give them credit, they’re a good hockey team with a lot of skill. For the first time this year we just didn’t look like ourselves.”

It must be noted that Minnesota (19-11-0, 14-6-0-1-2-0) was missing four players who are participating in the Winter Olympics and their starting goalie signed an NHL contract with the Carolina Hurricanes in January.

All in all, not a good weekend for the Buckeyes.

The defeats dropped OSU from first to third in the Big Ten. Michigan has 45 points, followed by Minnesota (43) and the Buckeyes (42). Notre Dame sits fourth at 35.

Worse for the Buckeyes is they have only two games left in the regular season while everyone else plays four more times.

Ohio State finishes at Michigan on Friday and Saturday and is idle Feb. 25-26 to close the season before the conference tournament begins March 4-6.

The Wolverines also have four of its top stars at the Olympics, but they swept Michigan State this past weekend.

After facing the Buckeyes, Michigan ends with two games at Notre Dame. Minnesota goes to Penn State for a series this weekend before hosting Wisconsin. Notre Dame is at Michigan State before the set vs. the Wolverines.

It was more bad news in the PairWise ranking for the Buckeyes. They slipped from a tie for 10th to a tie for 12th with Notre Dame. The top 16 teams make the NCAA tournament.

Michigan remains No. 1 while Minnesota moved up to fifth from eighth after the sweep.

Minnesota added a goal in the second by Aaron Huglen for a 3-1 lead at 15:14. Joe Dunlap scored 31 seconds into the third period for the Buckeyes, but their patented comeback never materialized.

Jakub Dobeš made 28 saves for the Buckeyes. The loss was the second in 16 games (12-2-2) and the first in regulation during the stretch.

“One-goal game. We talk to these guys a lot. It’s playoff hockey,” Rohlik said. “You feel like you’re playing a decent game and you’re up one-zip, make two mistakes against a really good hockey team and next thing you know you’re down 2-1 after one. We tried to claw our way back and just didn’t quite have enough at the end.”

On Saturday, 6,208 were on hand to see the Gophers pull away after their quick start. The Buckeyes were able to tie it 1-1 on a Tate Singleton score at 15:10 of the first but that was it as Minnesota again struck quickly – scoring twice in the final 1:29 of the first.

They added a goal in the second and another in the third as the Buckeyes for the first time this season did not earn at least three points Big Ten points in a series.