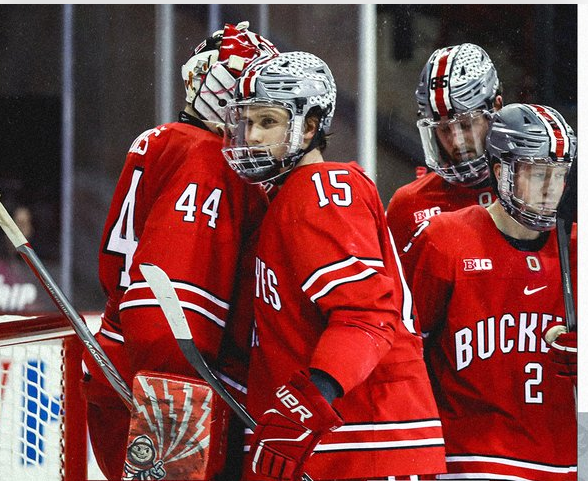 A win against the last-place team in the Big Ten, even on the road, shouldn’t make the list of the biggest games of the season but that may be the case for Ohio State’s 2-0 victory at Wisconsin on Saturday.

The shutout came on the heels of  the Badgers 4-0 blanking of OSU the night before at the Kohl Center in Madison, to give the Buckeyes two straight losses after a six-game winning streak.

Those bad beats would calculate to a lower PairWise ranking and could come back haunt the Buckeyes as it did last season when they were the first team outside the 16-team NCAA tournament.

Fears of dropping out the top 10 were allayed when sophomore Jakub Dobeš stopped all 27 Wisconsin shots in front of a crowd of 9,766 for his third shutout of the season and sixth in his career.

“It was a great bounce back win,” senior forward Tate Singleton said. “Everyone bought in and played their game. Dobeš kept us in the game all night and we did our jobs to help him out. It was a great team win.”

Singleton opened the scoring at 6:24 of the second period for his sixth goal. He drove the net to take the feed from sophomore defenseman Mason Lohrei. Freshman Stephen Halliday had the secondary assist.

Prior to that, the Buckeyes faced a 5-on-3 UW power play for two minutes but allowed only three shots.

“This was a great win on the road,” OSU coach Steve Rohlik said. “The key was killing the early 5-on-3 power play. Jakub played outstanding.”

It wasn’t that way in the first game as a major penalty in the third period led to a pair of Badger goals to double their lead, marking the first time this season Ohio State allowed more than one power-play goal in a game.

Then, a major penalty for charging to Singleton and a cross-checking infraction by sophomore Cam Thiesing gave the Badgers a two-man advantage. OSU killed the minor but the Badgers got goals by Tyson Jugnauth (13:49) and Cruz Lucius (14:27) during the remainder of the major to pull away. Jared Moe made 22 saves for the Badgers while Dobeš had 30.

“We got outworked and outplayed in every facet of the game tonight,” Rohlik said.

Of note, OSU senior forward Kamil Sadlocha, who was alleged to have directed racial slurs at Michigan State’s African-American forward Jagger Joshua on Nov. 11, returned to the lineup for the first time since the Notre Dame series on Nov. 18-19.

He was sent home after the games against the Fighting Irish following public outcry over the school’s and Big Ten’s refusal to suspend him because of a lack of evidence. Sadlocha rejoined the team after the holiday break.

He did not have any points vs. Wisconsin but did receive a roughing penalty in the second game.

Ohio State and Penn State have 27 points to tie for second in the conference, 10 points behind Minnesota. Michigan State (24) is fourth.