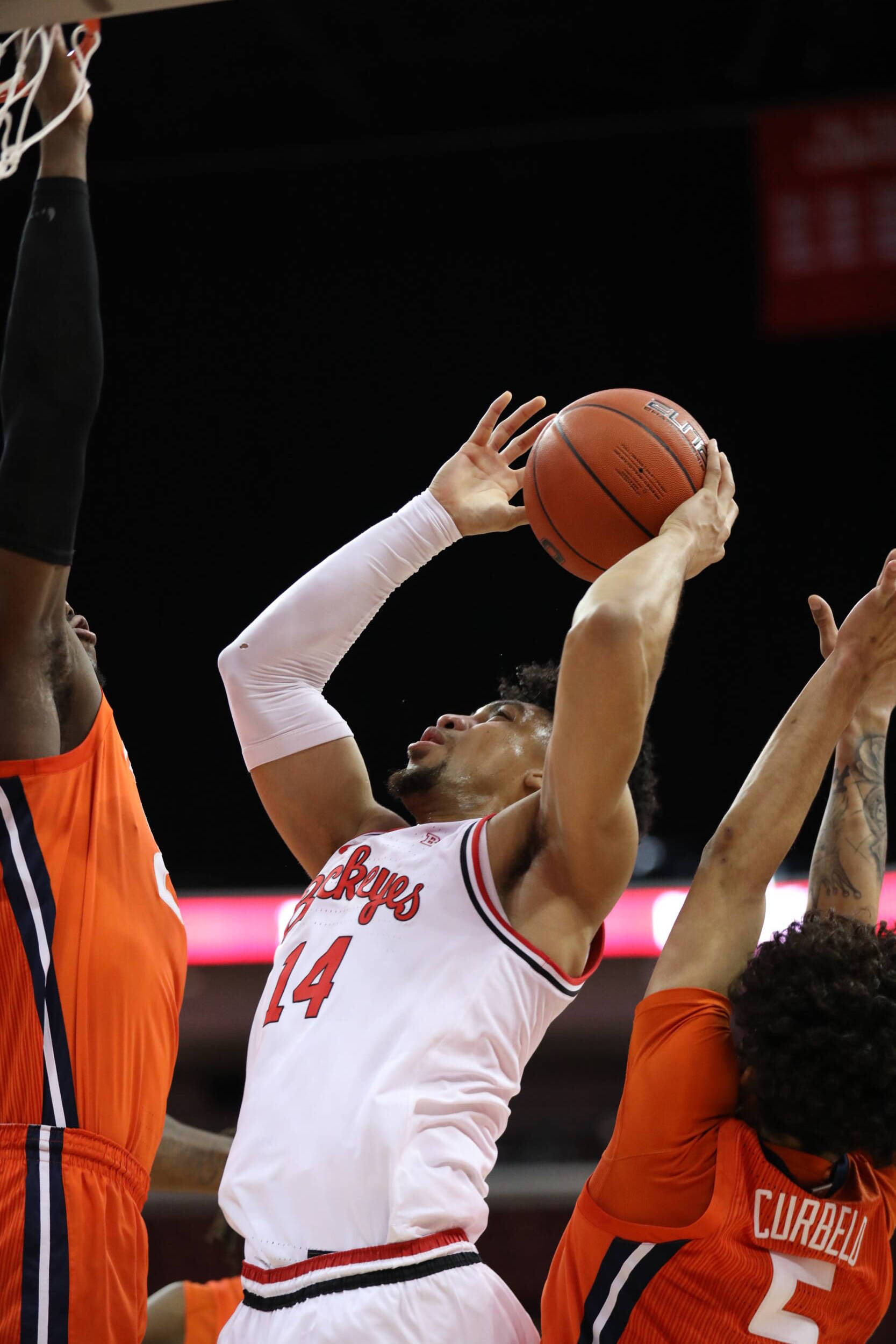 After finally snapping its five-game losing streak with a 93-77 win over Iowa on Saturday, Ohio State’s sights have locked in on building momentum while in the brunt of Big Ten play.

With the Buckeyes needing to stack wins to build up their NCAA Tournament resume, an opportunity to do just that arises on Tuesday with a trip to Champaign, Ill., to take on a new-look Illinois squad. Following the losses of program stars Kofi Cockburn and Andre Curbelo, The Fighting Illini, similarly to the Buckeyes, bolstered its roster with a highly-touted freshman class and a trio of proven transfers with the goal of remaining among the Big Ten’s elite.

“(Illinois) is really good, really talented, well-coached, tough, and obviously really hard to play, home or road, but certainly in that environment,” Ohio State head coach Chris Holtmann said. “Like a lot of teams in college basketball, they’ve had some times where maybe they’ve struggled with a relatively new group, a lot of new faces, but they’re a really good team.”

“I think he’s the most athletic player in our league,” Holtmann said. “(He has) an ability to score at all three levels and an ability to get to the rim. (He can) make threes and make threes behind ball screens at the same time.

“He’s a tremendous talent,” he continued. “I think Isaac (Likekele’s) ability to just make those guys work will be important.”

While the transfers have carried Illinois to this point, the freshmen have been a mixed bag. Clark struggled out of the gates for the Illini, producing 7.0 points per game while shooting 41.1 percent, and announced on Jan. 6 that he would be stepping away from the program for personal reasons. Epps has been a solid piece for the Illini off the bench, though, averaging 9.3 points per game on 43.2 percent shooting.

Although much of the attention has fallen on the new faces, returning forward Coleman Hawkins remains an important cog in Underwood’s program. Hawkins leads the Illini with 3.2 assists per game, to go along with 9.6 points and 6.0 rebounds per contest. He has the ability to stretch the floor, coinciding with Shannon and Mayer’s similar penchant to pull from three-point range, and shoots 32.5 percent from beyond the arc.

As the Illini frontcourt can shoot at a high level, Holtmann noted that their ability to stretch the defense is an area that the Buckeyes are keyed in on prior to Tuesday’s contest.

“They can stretch the defense,” Holtmann said. “(Hawkins) is a long, rangy kid, who provides a lot for them. They’re a team that plays with tremendous energy.

“They can really score in bunches,” he continued.

With Ohio State looking to reassert itself in the Big Ten picture, guard Tanner Holden said the Buckeyes cannot look back on their win against Iowa and need to continue pressing forward, starting with their trip to Illinois.

“We can’t get complacent,” Holden said. “After the win against Iowa, it feels good to finally get back in the win column. But I don’t think we can be satisfied with one win. I think we have to keep building.”

The Buckeyes and Illini tip-off at 7 p.m. at State Farm Arena in Champaign, Ill. The game will be televised on ESPN.