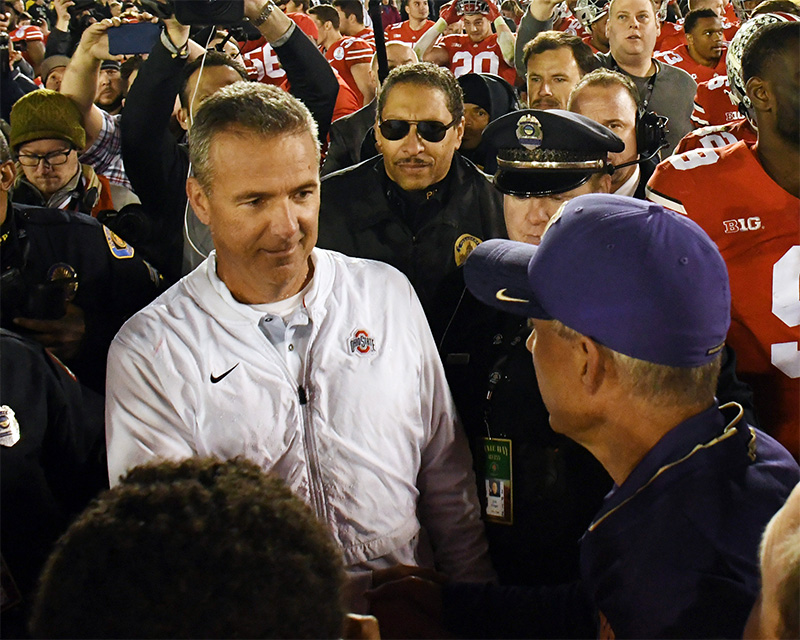 Meyer on what he accomplished in his seven years at Ohio State: “We were in dire straits. Every one of those seniors could have left back in 2012, and every one of them stayed. And it was one of the six undefeated teams in Ohio State history.

“And so it was something that every week, every yard, every down, when we recruited these players, I just wanted to make sure that we made the great state of Ohio proud. And once again, we weren’t perfect, but we did a lot of good things.”

Meyer on his salute to the band and Ohio State fans after the game: “I told you that when adversity strikes, people scatter. And when I needed them the most, you gave us the very best. The band didn’t scatter. The band was there. Buckeye Nation was there. We saw that all throughout the adversity that we went through. And I can’t tell you – my love affair for Buckeye Nation has never been as strong.”

Meyer on what he will do on Jan. 2 when he is no longer the head coach: “I have no idea, to be honest with you. I’ve been thinking about that a little bit and trying not to think about it because it gets in the way of these two players (seated with him) and the team.

“But I have the best athletic director (Gene Smith) that you can be around. I have a school that I love dearly. I feel very welcome in Buckeye Nation and here and I’m an Ohioan. So my job as we move forward is to make Coach (Ryan) Day, who is an elite coach, make this program even stronger, and that’s all of our focus. That’s their focus, my focus, Gene Smith’s focus. It’s a very strong program, but we’re going to make it stronger.”

OSU fifth-year wide receiver Parris Campbell on Meyer’s last game: “I think Coach Meyer does a great job of hiding his emotions. He didn’t really let that get in the way of winning the Rose Bowl, because that was our No. 1 goal coming in as a team, coaching staff, everyone included. So it was a more serious than anything. Everyone just prepared to go in this game.”

OSU sophomore quarterback Dwayne Haskins on Ohio State fans chanting “one more year” after the game: “Well, Buckeye Nation loves me, and I love Buckeye Nation since I was 8, 9, 10 years old. So to receive that ovation from them, to know how much they value me as a player and to know how much work I put into this to be in this spot, just to go to school here, I’m just really blessed. I’m thankful to the guy to the right (Meyer) for recruiting me. And I really couldn’t ask for more.”

Washington head coach Chris Petersen on his team’s slow start: “That’s a tough one. It’s very frustrating when you start the first half like we started. I had no idea why. It’s on me. It’s not these kids. They practiced hard. They’re ready to play. But we really didn’t play with that edge and that chip that we normally play with, really, just across the whole squad.

“I don’t know, being off that much time, it just didn’t seem the same. I’m proud of them. There were a few adjustments at halftime, but really more than anything, just an attitude adjustment, make a few plays. And that breeds excitement when you make a few plays and kind of feed off each other.”

Petersen on his decision to punt instead of go for a late fourth down in the fourth quarter: We were going to go for it. And then if we didn’t convert, we don’t want to put our defense in such a bad situation there — we actually might have had a little something else going on there in terms of the punt. But they lined up not – the punt return team lined up not how we wanted them to.”