Predictions: BSB Staff Has Varying Degrees Of Confidence Against Badgers 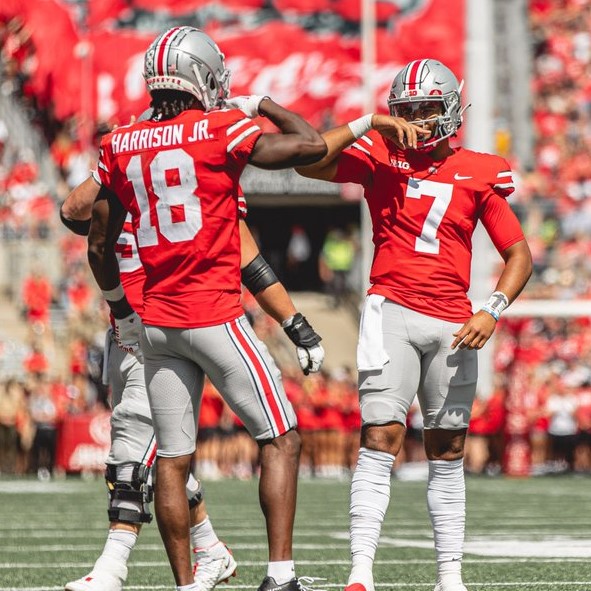 This seems like a game where Ohio State can make a statement. Frankly, I don’t see a path for Wisconsin’s offense to move the ball. Its offensive line isn’t up to the quality of years past, and while sophomore running back Braelon Allen is a behemoth, I don’t think he’ll be able to get going downhill the way the Buckeyes’ defensive line has been attacking the line of scrimmage.

There may be big-play exploits for OSU opponents if the team’s issues at cornerback persist, but fourth-year quarterback Graham Mertz hasn’t proven he’s the man to take advantage in my eyes. He completed just 59.5 percent of his passes last year with a mere 6.9 yards per attempt. Washington State held the Badgers’ attack to 14 points, and on paper they don’t have talent or scheme near the caliber of Ohio State.

On the flipside, the Buckeyes’ offense feels like the engine of a drag racing car, warming up before it fires off full speed. Wisconsin’s defense has kept it in games in the past, but every unit has its freezing point. Everyone has known what Ohio State’s passing game is capable of, and thus far there’s been a marked improvement on the ground and in offensive line play. Even fourth-year tight end Cade Stover has been more involved than others at his position in years past.

Rolling through a defense the stature of Wisconsin’s is the next step for OSU to show it once again has the best offense in college football. If there were any doubt about this squad as a championship contender, it gets erased this week.

A lot has been made about Wisconsin defensive coordinator Jim Leonhard this week, thanks in large part to the reputation he carries into this game. He, once again, has the Badger defense among the conference’s best through three weeks this season. I think Wisconsin’s defense will fluster Ohio State throughout much of the first half, but the Buckeyes will eventually find their footing (in similar fashion to the Notre Dame game).

While Wisconsin boasts a talented running back in Braelon Allen, as well as a punishing offensive line, I think Ohio State’s run defense will prove that the first three weeks of the season were not a fluke. As the Badgers’ passing attack lags behind its rushing presence, I believe Wisconsin will not be able to find an offensive rhythm for much of Saturday’s contest.

It might be lower scoring than anticipated, but the Buckeyes will get the job done.

Wisconsin has a tried and true method at this point when facing Ohio State – keep things close long enough to cause a scare among the Buckeye faithful, but never actually complete the job.

Ohio State held just a 10-point lead at the half in the team’s first meeting in 2019 before going on to a 38-7 win, and in the Big Ten Championship Game just two months later, the Badgers led 21-7 at the half before a rousing second-half comeback gave the Buckeyes a 34-21 win.

Given Ohio State’s propensity so far to give up big plays, going against Wisconsin quarterback Graham Mertz and running back Braelon Allen could result in some early points for the Badgers, but it will only be a matter of time before Ohio State’s offense is able to pull away. Exercise some caution, though, in that this will likely be one of the best defenses that the Buckeyes go up against this season with an excellent group of linebackers.

Even if Ohio State is only up 10-7 or the like heading into the half, I would still predict a comfortable win for the Buckeyes against the Badgers given the talent level on Ohio State’s sideline.