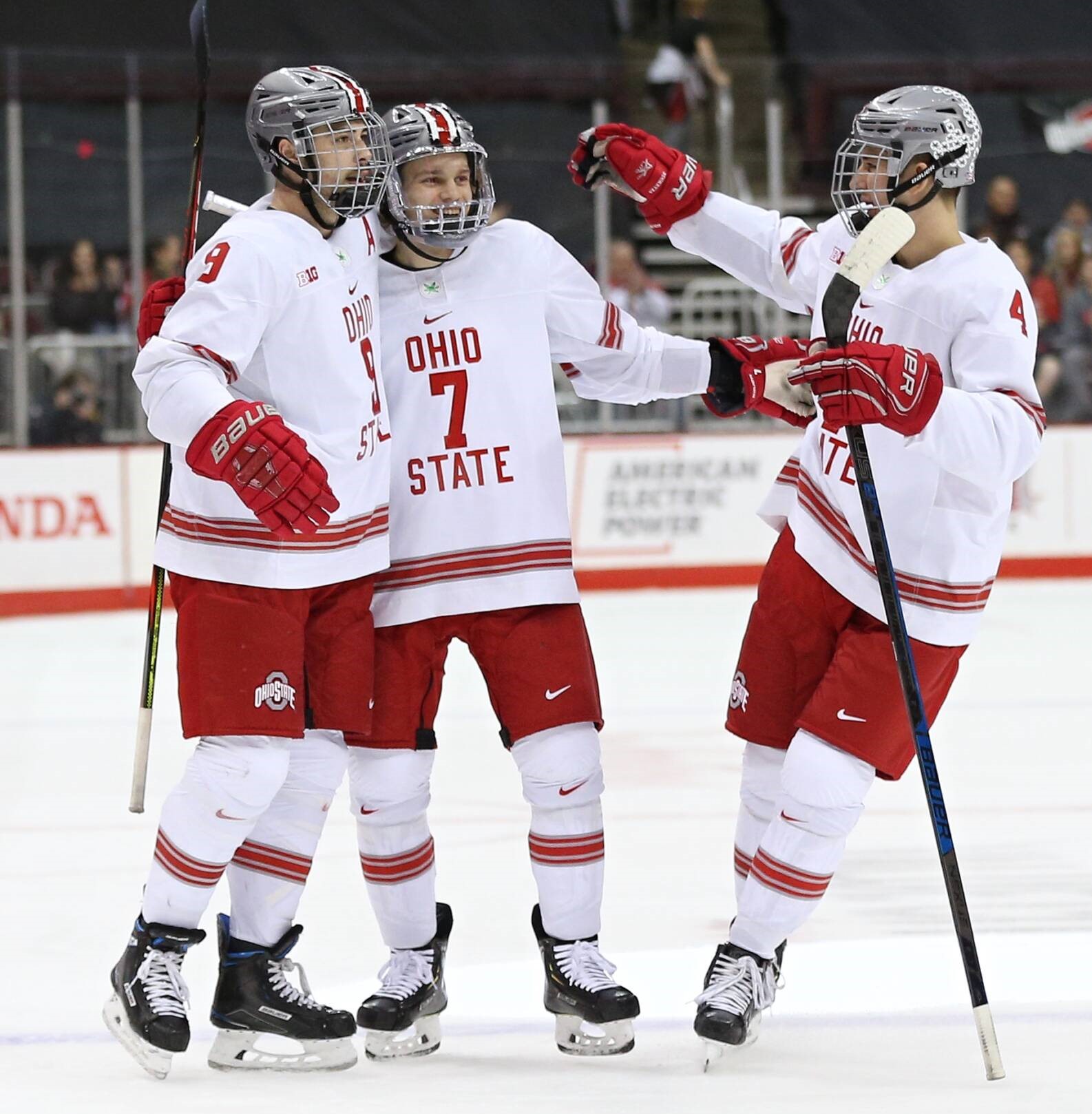 The women’s hockey team is in line for a new home while the men’s hockey team will stay put with a reduced capacity at Value City Arena in the Jerome Schottenstein Center, Ohio State Athletics Department officials said Wednesday.

The men have long been the subject of a possible new venue because the 17,500 seats for hockey are too many for a program that averages a little more than a third of that.

However, under a plan outlined by Deputy Athletics Director Diana Sabau and Shawn Richard, senior associate AD, Sport Administration, the upper deck will be completely tarped, forcing the hockey press box to be moved to a lower level and the capacity in the lower bowl will be a maximum of 7,700 for men’s hockey.

“That’s the goal,” Richard said. “We need to create a plan how to bring that press box area down and all the functions that are in there so we can close that drape.

He said the upper deck would not be open for games such as those against Michigan, which often in January and February draw more than 7,7000.

There is no time frame for when the reduced seating will be implemented – or how – but it is unlikely for the 2020-21 season.

The men have played in Value City Arena since it opened for hockey in January 1999. The former home, the OSU Ice Rink, houses the women’s program for practices and games and the men practice there when other events are in VCA.

The ice rink was built in 1961 and seats about a thousand, which is limiting fan support, Sabau said.

The plan calls for a rink to be built near, possibly adjacent to, Value City Arena and seat between 2,000  and 3,000. A likely spot is the corner of Lane Avenue and Fred Taylor Drive.

“We feel it’s going to add not only to the women’s program but the men’s program because that will give them the benefit of having a second sheet of ice in the very, very close proximity of the Schottenstein Center,” Sabau said.

There is no timetable for when the project will start and there are plenty of hurdles, including funding.

Neither Sabau nor Richard had a cost estimate for the new hockey arena.

Sabau said ideally firmer arena plans will be announced in the spring along with a formal fundraising campaign.

“I don’t know where that direction will go,” she said. “Maybe we’ll have something we can present, and it will be tweaked or just approved, or maybe we’re real close and have to go back and work on a few more things.”

Sabau and Richard met with reporters from Buckeye Sports Bulletin, The Columbus Dispatch and The Athletic to discuss a recent study on facilities for the hockey teams.

A recommendation was for a 4,000-seat arena because of cost and land space considerations. Richard said that would not meet the needs of the men’s team. He said average attendance was 6,500 last season and since 2013 crowds are up 46 percent and season tickets have increased by 60 percent.

“If we continue that trend up, we’re going to be in a really good spot in the next couple of years,” Richard said. “As we’ve gone through the studies of where we are, what we’ve realized is the Schott is an amazing experience for our men’s program.”

Once it was determined that the men would stay at Value City Arena, the need to address the women’s situation was apparent. Having 7,700 seats for their games is not an option.

“We can’t sacrifice the women’s student-athletes’ experience by putting them into an arena that’s six- and seven-thousand seats,” Sabau said. “That’s why we don’t have them playing in the Schottenstein Center right now because it would be this little rain drop in a big lake with fans coming to our games.”

Other notes from the meeting:

+ The men’s team will get an extensive renovations of its locker room and adjoining areas. That project is already in the pipeline for capital improvements.

+ Sabau said the OSU Ice Rink will get some upgrades as well to maintain the facility until the new arena is built.

+ Even with a new rink, hopefully connected, VCA will continue to be the main practice sheet of ice for the men.

+ The university is adding resources to market the programs better and attract more fans.

More to come in the Dec. 21 issue of BSB