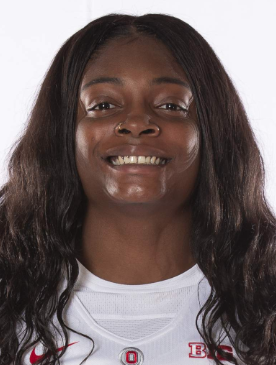 After the Ohio State women’s basketball team added Ashanti Abshaw as a graduate-transfer guard from Cleveland State in May, head coach Kevin McGuff had high hopes for her impact on the Buckeyes’ offense as she meshed with OSU’s new-look squad throughout the preseason.

Over the weekend, however, Abshaw’s 2018-19 season was taken away after a torn ACL in practice. Ohio State announced the news Tuesday with a statement from McGuff.

“I’m extremely devastated for Ashanti,” McGuff said. “She is a great kid and worked really hard to get acclimated to our system and was going to make an impact. She will undergo surgery soon and we will support her throughout this process to make sure she gets back to 100 percent.”

Abshaw graduated from Cleveland State in the spring with her degree in communications management, transferring to Columbus and working on a master’s degree in workforce development. As a Cleveland Heights native, she decided to stay home with the Buckeyes over offers from Ole Miss and Purdue, among others.

“For one, first and foremost, family,” Abshaw said Oct. 18, detailing the decision for OSU. “I really didn’t want to go far. And then, second, I really liked their offense. And then it’s just the program as a whole. It just seemed like a great program and it was the best opportunity.”

In three years with the Vikings, Abshaw became a three-time All-Horizon League honoree. She earned first-team selections for the past two seasons, capped with a 2017-18 campaign in which her 19.2 points per game paced CSU as its top scorer.

While her role remained unknown as Ohio State pondered potential rotations, she was expected to make an impact on both ends of the floor. Abshaw’s absence opens the door for more minutes across the graduate-transfer trio of Carly Santoro (Bowling Green), Adreana Miller (LaSalle) and Najah Queenland (Pacific) at the two.