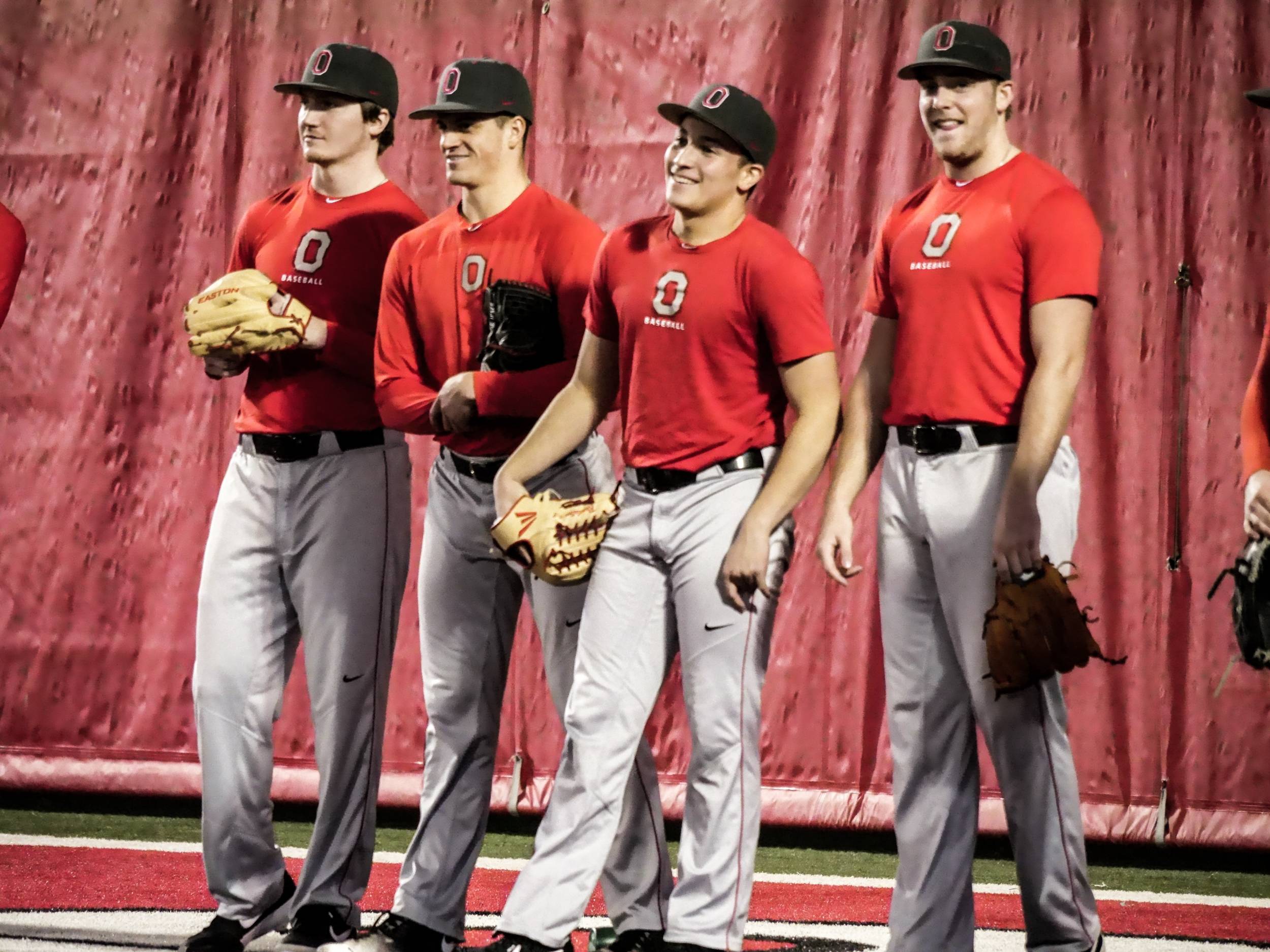 The Ohio State baseball team rebounded in 2018 with 36 wins and a trip back to the NCAA Tournament. While the Buckeyes return 15 letterwinners, they face the tall task of replacing more than 440 innings of pitching from a season ago.

Senior second baseman Kobie Foppe, who hit .335 with a team-high .441 on-base percentage as a junior, expressed excitement about the talented newcomers.

Foppe and his double-play partner in the middle, junior shortstop Noah West, return after a solid season up the middle, where they posted fielding percentages of .954 and .963, respectively. The second bagger emphasized the importance of providing solid defense behind the team’s untested arms.

“I think making plays consistently behind our young staff on the mound is going to really give them confidence to consistently throw strikes,” Foppe said. “I think them just throwing strikes is going to be a big part for us this year.

Foppe said to look out for Burhenn and Lonsway on the hill. Spectators will not have to squint to see the Scarlet and Gray’s new starters, with both standing 6-foot-3. The duo is highly touted — Burhenn made D1Baseball.com’s Impact Freshman list and Lonsway was the No. 4 Big Ten prospect for the 2020 draft, per Perfect Game.

Head coach Greg Beals understands the challenges of having a young staff, and emphasized the importance of pitching in actual games, not just practice.

“We got to get them experience, we got to get them out there, get them as comfortable and confident as can,” Beals said. “We’ve done a lot of work here in this offseason to prepare them for that — nothing quite like real game, different colors for the opponent on the other side, fans, scoreboard, the whole nine yards — you can’t simulate that part. We’re as ready as we can be with a young pitching staff for that element, though.”

While the Buckeyes lost many pitchers from last season, some key pieces remain. Junior right hander Jake Vance will be critical as well as left-handed relievers, sophomore Griffin Smith and junior Andrew Mango, and righties, fifth-year senior Thomas Waning and sophomore Jonathan Jahn. Beals noted the veterans’ helpfulness in bringing the fresh faces up to speed.

“Our brotherhood is one of our core values,” Beals said. “They talk to each other, they spend a lot of time together, they’re sharing information together. Even a guy like Seth Lonsway, who’s here for his second year, Friday’s going to be his first collegiate start, though. But Seth has been  around the block, he’s helping the younger guys. Griffin Smith has been great with the younger guys.”

Replacing an All-American like Kinker or a fourth-round pick like Feltner will not be easy, but having a strong nucleus of position players helps ease that transition. While taking questions about the pitching staff and lineup as if they were separate entities, Beals addressed the need to come together as a complete unit.

“We know we who we are, we know what we got to do. And we’re going to play together our guys know that we got to play defense to support this young pitching staff. They also know how talented these young guys are. These guys are very talented, and I’m excited about that. We’ve got to help them ease into the season so that talent can really shine.”

The Buckeyes travel to Port Charlotte, Fla., for a weekend series with Seton Hall in the Snowbird Classic Feb. 15-17 before a one-game showdown at Florida Gulf Coast Feb. 18.