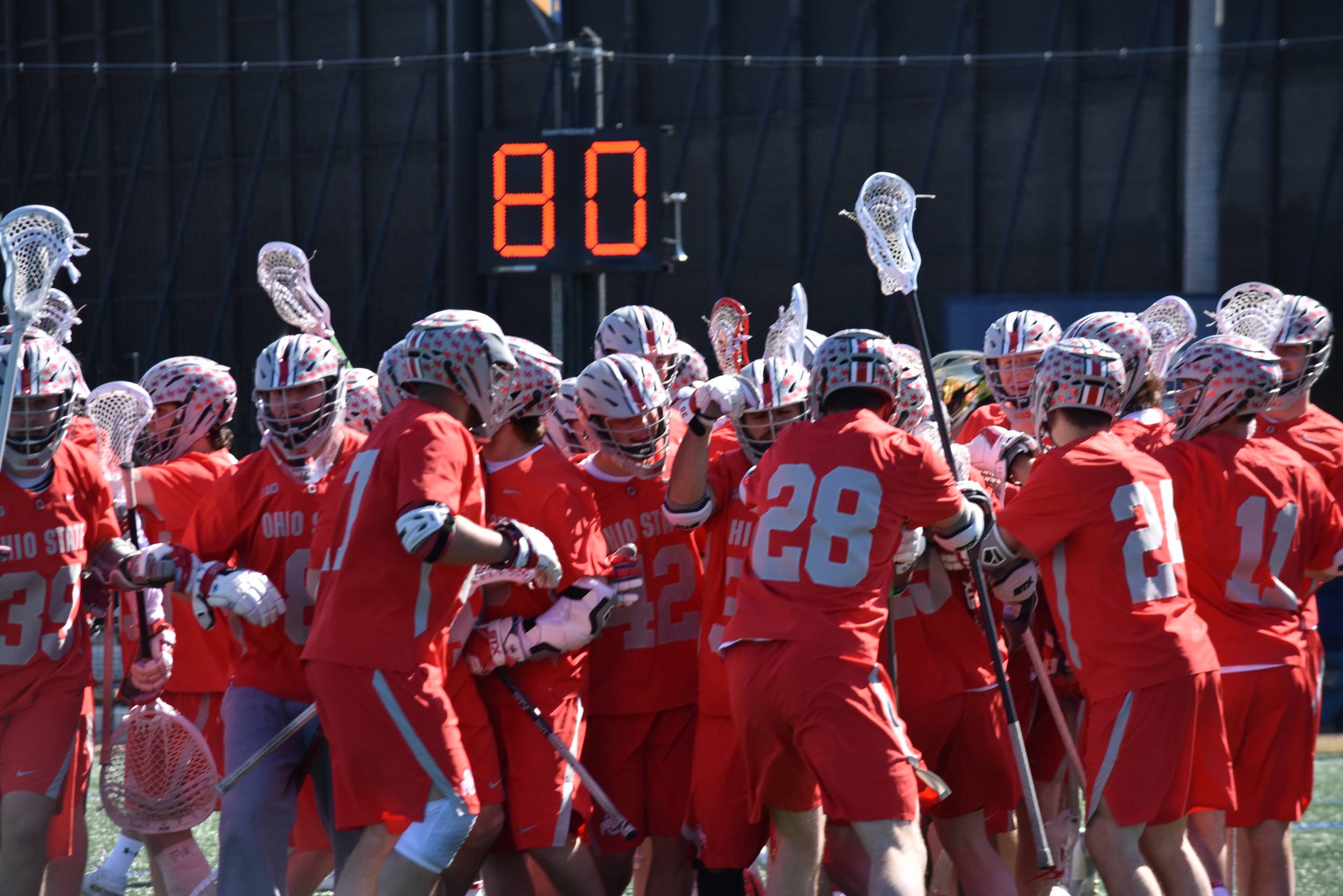 The Ohio State women’s swimming team broke school records, the women’s tennis team won its 11th straight contest and the softball team swept Indiana for the first time in four years. The men’s lacrosse team and men’s gymnastic team both enjoyed major comeback wins, and the men’s tennis team and baseball team got back on track. The fencing team and the pistol team both competed at NCAA Championships, while the wrestling, track and field, women’s gymnastics, women’s lacrosse and men’s volleyball teams all competed as well. What follows are recaps of the past week of events for Ohio State’s student-athletes in Olympic sports, including links to the press releases.

The No. 5 Ohio State men’s lacrosse team (7-0) faced a five-goal deficit in the second half, but came back and defeated No. 11 Notre Dame (4-3) in overtime, 11-10. Colby Smith delivered the game-winning goal in overtime, breaking the Fighting Irish’s spirits in South Bend, Ind.

The Ohio State women’s lacrosse team (7-4, 0-2) bounced back with a 16-10 victory against San Diego State at the Jesse Owens Memorial Stadium on March 24. Senior Baley Parrott led the way with four goals for Ohio State, and her final goal of the game was her 100th career goal.

The No. 1 Ohio State men’s tennis team got back on track, knocking off Michigan, 6-1, in Ann Arbor on March 25.

The Ohio State baseball team rallied back from down 6-1 to beat Northern Kentucky, 10-8, at Nick Swisher Field at Bill Davis Stadium on March 19. The Buckeyes tallied 14 hits, including a season-high seven extra-base hits. Ohio State scored four runs in the fourth and added three more in the bottom of sixth, including the go-ahead, two-run home run by redshirt sophomore catcher Brent Todys. The Scarlet and Gray added two more insurance runs in the eighth.

The Ohio State baseball team were victors again with a 6-5 win against Hawai’i at Nick Swisher Field at Bill Davis Stadium on March 22. Junior right fielder Dominic Canzone went 3 for 5 at the dish with two home runs, one double, two runs batted in and three runs scored. Senior left fielder Brady Cherry kept up his hot start with a three-hit game, including a round tripper. Freshman right-handed reliever Bayden Root improved to 2-1 in the victory, pitching 3 ⅓ innings of relief. Freshman right-handed reliever Will Pfennig earned his first career save with a game-ending strikeout.

The Ohio State baseball team fell, 15-3, against Hawai’i at Nick Swisher Field at Bill Davis Stadium on March 24. The Buckeyes (13-11) still won the four-game series aginst the Rainbow Warriors (10-14) with a 3-1 record on the weekend.

The Ohio State wrestling team scored 96.5 points and finished as national runner-up at the 2019 NCAA Championships.

More on the Buckeyes’ performance will be detailed in the next issue of Buckeye Sports Bulletin.

The Ohio State women’s swimming and diving team ended the season on a positive note at the 2019 NCAA Women’s Swimming & Diving Championships, coming away with a national runner-up in the 1650 freestyle and two new school records. Junior Molly Kowal took second in the mile, while setting a school record in addition to junior Kathrin Demler’s record-setting performance in the 200 Fly.

The Hawkeyes took the doubles point, but the Buckeyes cruised to five singles wins, including four in straight sets. Kolie Allen led Ohio State with wins in both singles and doubles against Iowa.

The Ohio State fencing team placed sixth at the 2019 NCAA Championships and five Buckeyes earned All-American accolades. The Scarlet and Gray tallied a total of 120 points overall. The men’s squad earned 69 victories, and the women picked up 51, good enough for sixth in the nation.

The No. 23 Ohio State women’s gymnastics team took seventh place overall at the Big Ten Championships with a final score of 195.775 after finishing first in the opening session at Rec Hall on March 23. The Buckeyes were without co-captain and First-Team All-Big Ten member Jamie Stone.

The Ohio State softball team defeated No. 20 Indiana, 5-3, at Buckeye Field on March 23.

The Buckeyes swept the Hoosiers for the first time since 2015 with a 2-0 victory at Buckeye Field on March 24. The Buckeyes improved to 18-9 overall and 3-0 in Big Ten play while the No. 20 Hoosiers drop to 25-9 overall and 0-3 in conference contests on the season.

The Ohio State pistol team concluded its season at the 2019 Collegiate Pistol National Championships, competing as both a team and as individuals in open air and women’s air pistol to end the match.

The Ohio State men’s volleyball team got back on track with a victory against Quincy at St. John Arena on March 23. The Buckeyes swept the Hawks, outscoring the visitors by a combined score of, 75-49 (25-12, 25-17, 25-20). The convincing win marked the third sweep of the season for the Scarlet and Gray.