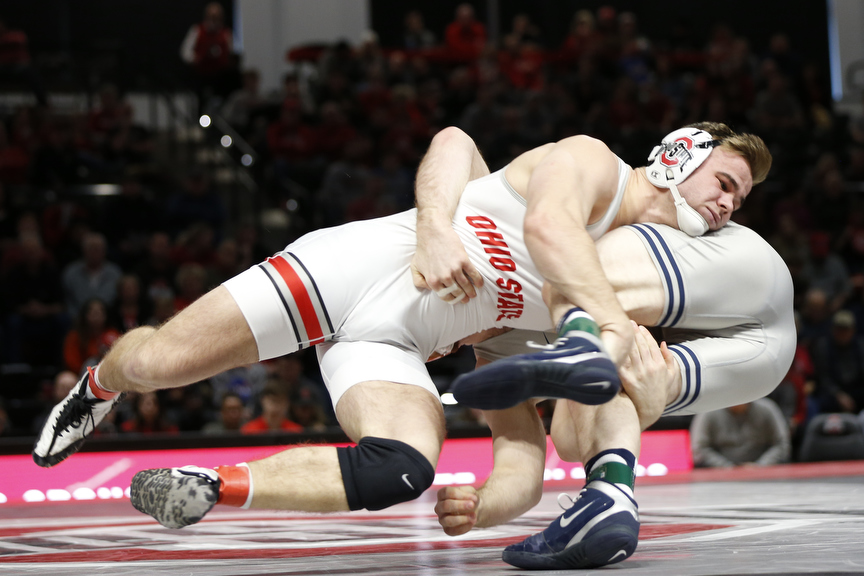 It was another busy week in Ohio State Olympic sports, with gymnastics and tennis both kicking off winter seasons. In the week, Buckeye teams went 9-2, led by excellent weeks from the men’s volleyball, men’s tennis, wrestling and women’s hockey teams.

The new season started with a bang for Ty Tucker’s program, as the Buckeyes opened with four straight wins to open the campaign. On Jan. 15, Ohio State toppled Northern Kentucky, 7-0 and Dayton, 5-0. It was a clean sweep in singles and doubles against NKU, with Cannon Kingsley, John McNalty, Justin Boulais, Kyle Seelig, Robert Cash and James Trotter all claiming singles victories, while the teams of McNally/Cash, Kingsley Boulais and Trotter/Andrew Lutschaunig all won in doubles.

Dayton was an almost identical story, with Lutschaunig getting involved with singles in place of Trotter, while doubles teams of Trotter/Boulais, McNalty/Kingsley and Seelig/Cash all secured wins.

On Jan. 19, the winning ways continued against an in-state duo of Xavier and Wright State. The Buckeyes beat both foes easily, 7-0 in both matches. Jacob Wareti made an appearance and secured a singles win against Wright State, while Tim Seibert did the same against Xavier.

Meanwhile, in women’s tennis, Ohio State took part in a tournament against No. 14 Michigan, No. 22 Tennessee and TCU, though there was no team score kept. The Buckeyes won quite a few matches, led by three singles wins for Mary Beth Hurley. Danielle Wolfe notched two singles wins, Isabelle Boulais grabbed one, Shiori Fukuda added two more and Cantos Siemers won one of her own.

The Buckeyes will take the court next on Jan. 25, at the ITA Kick-Off.

Ohio State is set to face USC and UCLA next week (Jan. 24, 26), both of which will be played at Penn State’s Rec Hall.

On Jan. 19, 28 straight points saw the Buckeyes down Illinois back at home, 28-6. After a slow start with losses from Malik Heinselman and Jordan Decatur, Pletcher, Sasso, Cleary, Ethan Smith, Romero, Jordan, Moore and Gary Traub won the final eight bouts to keep Ohio State unbeaten in conference play. Moore secured the first home pin of the season for the Buckeyes against Matt Wroblewski.

The Buckeyes take the mat next on Jan. 24 at Iowa, in what might be the biggest Big Ten matchup of the season. The dual will be broadcast at 9:00 p.m. on Big Ten Network.

Ohio State split a weekend series with No. 1 Minnesota. The Buckeyes took the first game, 4-1, thanks to goals from Gabby Rosenthal, Rebecca Freiburger and Sophie Jacques. It was a strong showing for Andrea Braendli, who racked up 21 saves and improved her record to 11-4-4 on the season, as the Buckeyes moved to 14-5-4.

Game two didn’t go quite as well, with Minnesota getting back on track and knocking off the Buckeyes, 2-1. Minnesota struck first, and while Jacques was able to equalize, Ohio State had no answer for a second period goal, going 0-for on four powerplay attempts.

The Buckeyes will square off with Quinnipiac next week, as the sit at 14-6-4.

Both men and women’s Buckeye teams finished in second place at the Simmons-Harvey invite hosted at the University of Michigan.

“I’m encouraged and proud of this team. I think we have some work to do but at the same time we have a lot of really fine athletes that will show up during the latter part of the season for us,” director of track and field Karen Dennis said.

Michigan won the three-team men’s meet with 126 points, while Ohio State checked in at 113, ahead of Michigan State with 53. Clarence Foote-Talley stood out for the Buckeyes, winning both long jump (7.13 m) and triple jump (14.36 m).

On the women’s side, Michigan was again the winner with 120 points, Ohio State placed second with 93 points and Michigan State third with 90 points. Jayden Woods starred for the Buckeyes, putting up a 400-meter time of 55.69 seconds, enough to win the title.

Both teams will show out next at the Columbia Challenge from Jan. 23-25.

Ohio State’s men’s gymnastics team opened the season with a second place finish at its home opener, placing second in all six events and tallying a final mark of 397.600, trailing only Oklahoma with 412.200. The Buckeyes will take on Penn State in its first road bout of the season on Jan. 25.

The women’s team, meanwhile, suffered its first defeat of the year, falling to Michigan State, 195.450-195.275. They’ll face Maryland and Central Michigan in a tri-meet on Jan. 25.