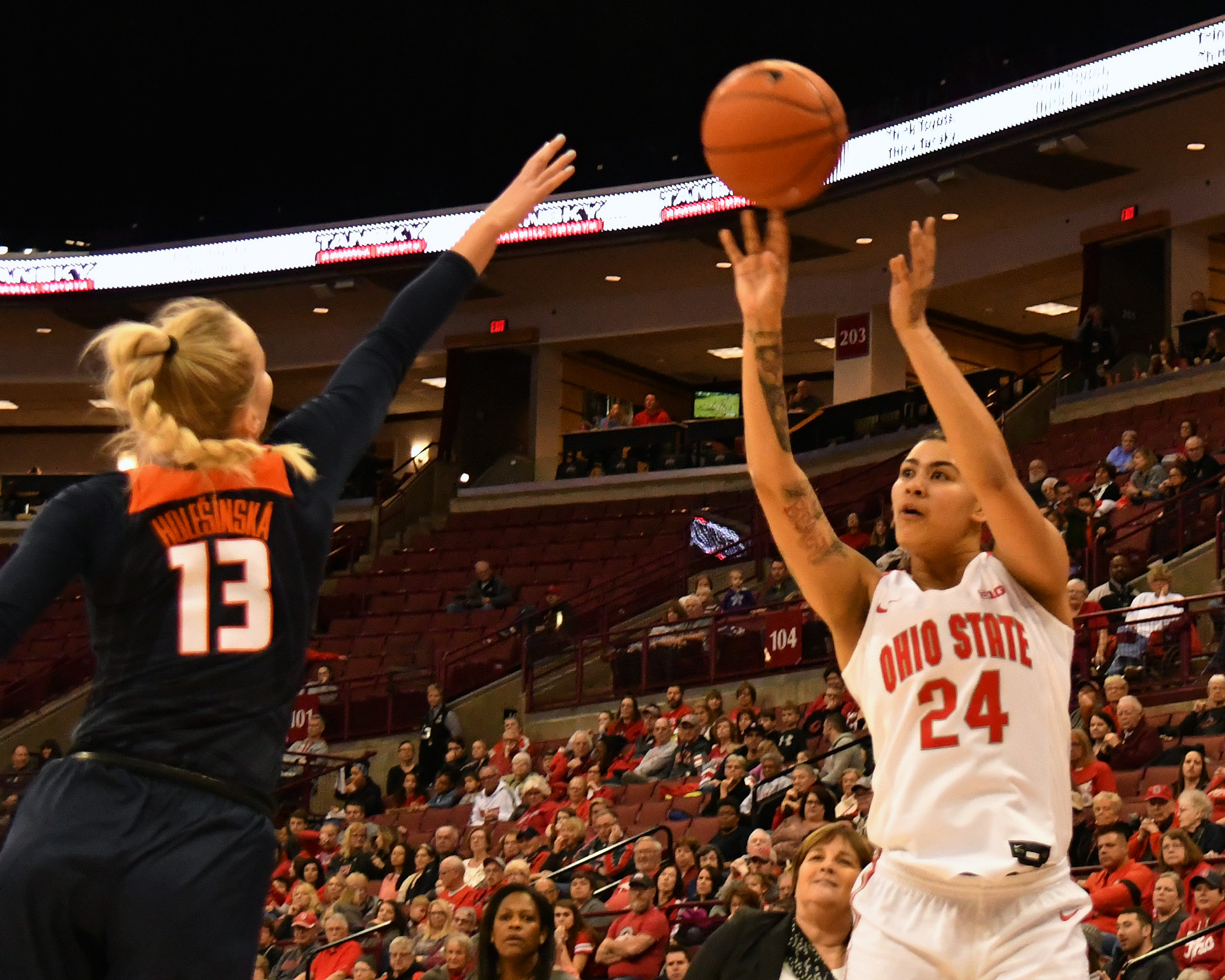 After a hard fought road loss to Michigan State that came down to the final possession, Ohio State was in need of a new source of momentum.

But with 5:04 left in the third quarter, Illinois threatened to give the Buckeyes their first losing streak since dropping games to UConn and South Dakota on Nov. 24 and 29, two teams currently ranked in the Top 25 (UConn at No. 4, South Dakota at No. 25) by tying the game at 37.

The mediocre start and hot finish is something that Ohio State head coach Kevin McGuff said was an amalgamation of the season Ohio State has had this year.

“This game’s very emblematic of our whole season in that we showed such great moments and a great stretch at the end, yet before that, we were not guarding the ball and rebounding and moving the ball for great shots as much as I’d like,” McGuff said. “Really it’s just about what do we have to do to get longer stretches of being the team we’re capable of being, and that’s what we need to work on, that’s what we need to figure out.”

The spurt was sparked by a 14-0 run that came from the two five-star freshmen currently playing: guards Jacy Sheldon and Kierstan Bell.

Sheldon gave Ohio State the lead once again in the third with a layup and three-point make, which led to Bell’s personal 9-0 run to give the Buckeyes a 51-37 lead heading to the fourth quarter.

“Definitely just pick our energy up. Go out there and play like we want to win, and that’s what we did,” Bell said on what helped spark the big run. “That’s what made our consistency come, and when the subs came in, they kept the same pace.”

The end of the third started the momentum that allowed for a 26-10 edge in the final frame, including a 13-1 run to end the game.

Bell finished with a game-high 19 points and eight rebounds on 7-of-11 shooting, while Sheldon tallied 10 points, hitting 3 of 7 shots, including both of her three-point attempts.

“She’s obviously a great player, she has a lot of talent, she was really locked in today,” Ohio State head coach Kevin McGuff said. “Not only was she scoring the ball, but she was rebounding, she had eight rebounds and played great defense, so it was a really great performance by her.”

“I think early in the year we had good shooters taking pretty good shots, they just weren’t going in,” McGuff said on the improved shooting output of his team in recent games. “We’re starting to see it go in a little more and I think our kids are gaining some confidence.”

Of Ohio State’s 77 points, 46 of them came from players on the bench. Bell was the primary contributor from the non-starters, but freshman forward Rebeka Mikulasikova’s 12 points were also enough to be one of four Buckeyes to end the game in double figures.

The fourth double-digit scorer was freshman guard Madison Greene, who once again started and his 4 of her 7 shot attempts for 11 points in 23 minutes.

The Buckeyes were able to earn their most dominant Big Ten win of the season without the help of two of their most important contributors: sophomore forward Aaliyah Patty and junior guard Braxtin Miller.

Patty didn’t attempt a shot in 20 minutes on the court, finishing with a pair of free throw makes and three rebounds. Miller did not score on the day, finishing 0 of 3 from the field in 23 minutes.

Ohio State moves on to face No. 22 Iowa on the road at 8 p.m. Thursday, and continue to push to find what will make this team capable of putting together a strong performance for 40 continuous minutes.

“As we get to the middle of January, when our defense is good and our rebounding’s good, that seems to fuel everything else,” McGuff said. “We get in transition off the stops and we seem to make enough plays on offense when our defensive rebounding is good so that’s where I think we have to really lock in and make sure that we are extremely consistent in that area.”