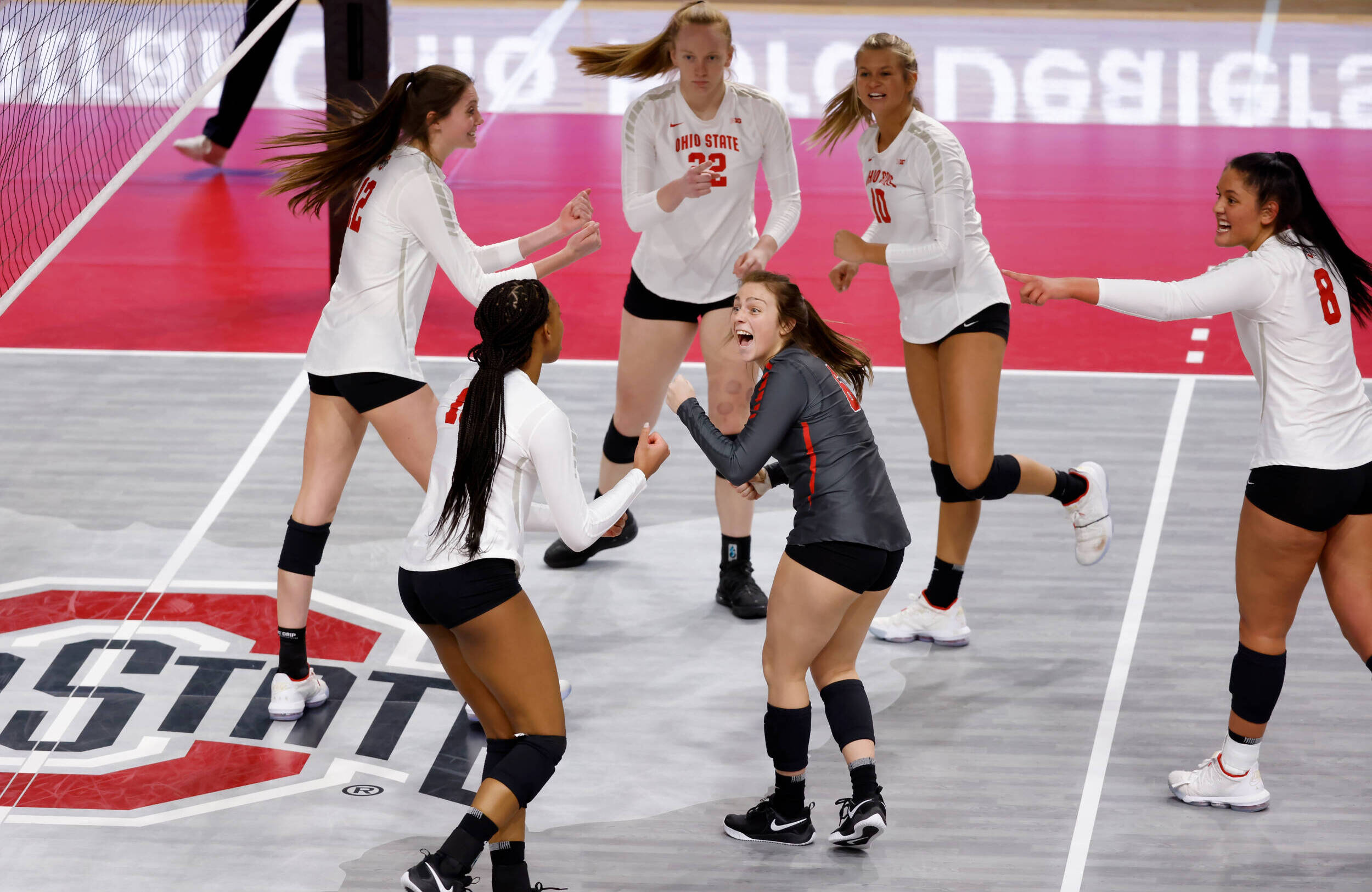 As a quick note for those of you looking for women’s hockey or wrestling updates, be sure to click around on BuckeyeSports.com, where we have full recaps for all happenings in both sports this week.

Ohio State made short work of rival Michigan in a two-game series, toppling the Wolverines 3-1 and 3-0 in back to back matchups to improve to 15-1 on the season.

Ohio State closes its home slate against Purdue on March 26-27.

Ohio State won a pair of matches in the past week to bounce back after a 4-3 loss to Michigan last week, thrashing Minnesota and Wisconsin to improve to 11-2 (8-1) on the season.

Ohio State leaned on the singles matches to knock off Minnesota after dropping the doubles point, sweeping the Golden Gophers in the individual matches. Scores via Ohio State.

The Buckeyes took the doubles point against Wisconsin and saw only Robert Cash fall in the singles region on the way to a second 6-1 victory over the weekend.

The women’s tennis team also tore through its two-match slate this week, crushing Maryland and Rutgers to improve to 13-3 (10-1) on the season.

Against the Terps, Ohio State claimed the doubles point and five of the six single matches for a 6-1 victory.

Against Rutgers, Ohio State was completely unstoppable. It won all seven available points to take a 7-0 victory, surrendering just two sets in the entire match.

“I am so happy for the swimmers and divers in this program, those that are here at NCAAs and those back home who are striving to make NCAAs and more,” director of swimming and diving Bill Dorenkott said. “They are the reason we have tremendous confidence as a program and why so much excitement and enthusiasm surrounds us.

“We have a culture driven by a team full of wonderful individuals who are superb students and athletes. I could not be more proud right now, nor more optimistic about the future success of this program.”

Ohio State impressed at the Valspar Collegiate on March 16, finishing third in a field that held six top 10 teams.

“We competed hard and certainly gave it a good push today,” said head coach Jay Moseley. “While we know there is still work to be done and some things we can clean up, this is certainly an encouraging week. I told the team Saturday night that if we go out and play the way we’re capable of, then on Tuesday afternoon, you’ll know you can compete with these teams. I think we did that this week.”

Freshman Max Moldovan finished tied for second after shooting 9-under par with a nice 66-69-69 performance.

The Buckeyes finished fourth at the Briar’s Creek Invitational, led by Aneka Seumanutafa, who shot 4-under par and finished as the runner up at the event. Ohio State finished behind only No. 14 Maryland, No. 18 Miami and host College of Charleston.

It was another solid week for Lori Walker-Hock’s squad, which drew with Purdue and toppled Illinois to improve to 3-1-3 on the season.

Against the Boilermakers, Ohio State found an 81st minute Kayla Fischer goal to even the game at 1-1.

Neither team could score in either overtime period though, sending the game to a 1-1 draw.

Fischer scored again against Illinois in the 66th minute and Izzy Rodriguez followed with a goal of her own a minute later to propel Ohio State to a 2-1 victory.

“What a great team effort and win,” Walker-Hock said. “Some games the starters are being shut down because of the opponent’s game plan. Illinois gave us many problems to solve. Several reserves came in during the second half and changed the tone of the match. Chloe Delyser was our player of the match for the quality of her hold up play as our center forward.”

Ohio State suffered a pair of losses to Rutgers and will look to avoid the sweep today at 1:00 p.m. The Buckeyes fell 6-5 in 11 innings in game one on a Rutgers walk-off sacrifice fly. Garrett Burhenn started for the Buckeyes and went 5.0 innings, allowing two runs on six hits and striking out eight with no walks.

Nick Erwin led the Buckeye attack with a 2-for-5 batting day, knocking in a pair of runs and hitting a double.

The Buckeyes couldn’t get on the board in game two and fell despite allowing just one hit between pitchers Seth Lonsway and Joe Gahm. That hit was a two-run home run though, slammed to right-center by conference home run leader Chris Brito.

Ohio State had a pair of runners on with one out in the ninth inning but couldn’t knock either in.

Lastly, Domenic Sciulli put up a 13.550 to come in second place on the high bar. Ohio State was set to finish the regular season against William & Mary but had the event canceled “out of an abundance of caution in alignment with the Department of Athletics and University’s COVID-19 protocols.”

“Credit to a good Maryland team,” said head coach Nick Myers. “I thought we played well in goal and at faceoff, two areas we can really build on going forward in the second half of the season. We will quickly turn the page and get ready for another rivalry game.”

A late Wisconsin goal ended Ohio State’s unbeaten streak and sent the No. 21 Buckeyes to a 3-2-1 record on the season. Ohio State outshot Wisconsin 11-8 but couldn’t beat keeper Carter Abbott, falling despite another very strong showing for netminder Noah Lawrence.

Ohio State will face off with Penn State next on March 23.

Ohio State fell to 0-5 on the season after a pair of 2-1 losses to No. 3 Iowa. Mackenzie Allessie scored late in game one to bring the Buckeyes within a goal, but Ohio State could not find an equalizer.

“This was a competitive and hard-fought Big Ten hockey game,” said head coach Jarred Martin. “Credit to Iowa and the win today. They are well structured and disciplined. We knew generating attack was going to be a team effort. I thought the second half we were much more threatening and creative. We were also able to tighten things up defensively. We can build off that as we continue to get better every week.”

Sina Schwinn scored another late goal for the Buckeyes in game two that went without an equalizer after a strong Iowa start.

“Another battle today but again credit to Iowa for sustaining our fourth quarter pressure and coming away with the win,” said Martin. “We made some good adjustments from Friday’s game, but we’re obviously disappointed with the same outcome. We were able to problem solve some intense moments with more composure, but I know there is more in our team. We expect more, we encourage more, and we will switch these close losses to victories for this team. Next weekend we play another top-five team so this week we will prepare, correct some areas, and be ready for a dangerous Northwestern team.”

Ohio State sits at 1-6 after two more losses this week, first to No. 8 Maryland 11-5 and then again to the Terrapins 14-9. Goalie Jillian Rizzo has played well for the Buckeyes, who have been marred by an inconsistent offense so far this season.