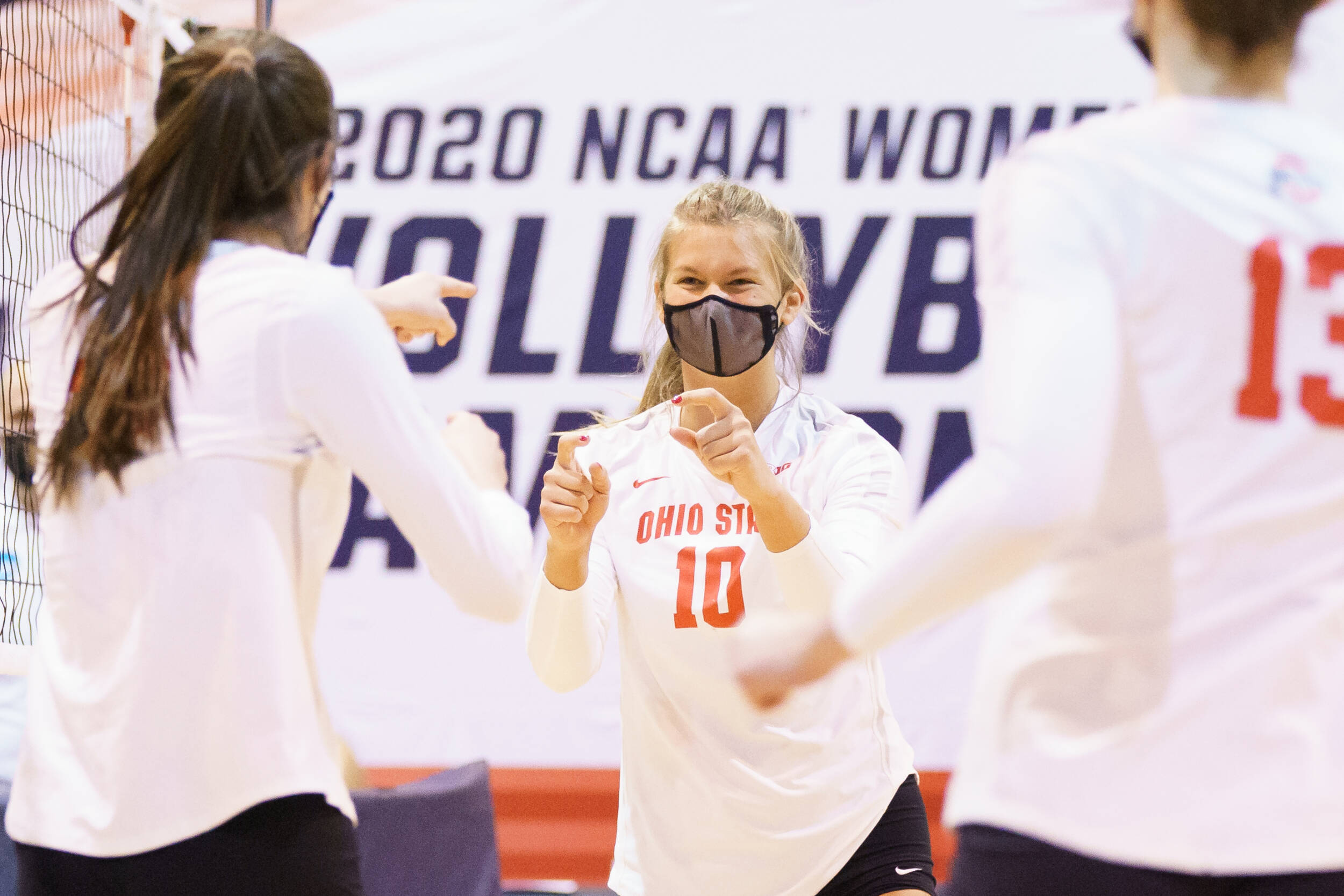 The women’s volleyball team’s season came to a close in the round of 16 at the NCAA Tournament, as it fell to No. 8 Florida, 25-20, 26-24, 23-25, 25-16, on Sunday night. The Buckeye finished the season at 16-4, an impressive start for first-year head coach Jen Flynn Oldenburg, who spoke with BSB about this season at large last week.

“I’m excited,” Oldenburg said. “I’m excited for the season we had in the Big Ten. This is just one of those weird years, and I didn’t know what to expect. I thought we would be pretty good, but the level we played at for a long period of time against good teams, that (caught me off guard). I think that that experience put us in the position that we are in right now and gave us a national seed in a weird tournament, but it also gives us a path to continue to build and grow on what we’re doing.”

For a full feature on the women’s volleyball team, be sure to check out the April 24 print issue of BSB.

The No. 8 men’s tennis earned some revenge over No. 7 Michigan and grabbed some hardware in the process. The Buckeye came from behind on April 18 to topple the Wolverines, 4-3, making up for a 4-3 loss earlier in the season, and earned the Big Ten East Division title in doing so.

The Buckeyes opened the match losing the doubles point and had to claim four singles matches to bounce back, which it juuuuust managed to do. Despite losses on courts two and six, the Buckeyes came back to knock off Michigan, with J.J. Tracy claiming a victory on court five to secure the win.

The Buckeyes also toppled Michigan State with another sweep, its fourth of the season over the Spartans.

The No. 10 women’s tennis team won the Big Ten championship with its 6-0 victory over Penn State on Saturday. The Buckeyes took the doubles point and then swept all five singles matches in straight sets to secure the win over the Nittany Lions and to improve to 18-3 on the season.

The Buckeyes will be the No. 1 seed at the Big Ten Tournament, scheduled to start on April 28 and continue through May 2.

The No. 22 Buckeyes ended their regular season with a 12-9 victory, knocking off No. 17 Michigan to improve to 4-8 on the season, including a sweep of the Wolverines. Liza Hernandez led Ohio State with four goals while Jamie Level had a hat trick. Those two scored the final four goals of the game to help reclaim the lead for the Buckeyes and ultimately secure the victory.

Ohio State will next partake in the Big Ten Tournament, scheduled for April 29-May 2 in State College, Pa.

“Credit to Maryland for a well-played game,” said head coach Nick Myers. “We will get back to work this week and clean up the things we need to in order to get ready for a big game next Saturday at home against Penn State.”

The men’s golf team finished 13th in a field of 17 teams at the ASU Thunderbird Invitational on Saturday, shooting 7-over par for the event. Freshman Adam Wallin led the way for the Buckeyes, shooting 1-under par and tying for 38th.

Ohio State finished 11th in a field of 16 teams at the Indiana Invitational, which Kent State won, shooting 8-under for the event. The Buckeyes shot 40-over par for the event.

Kailie Vongsaga and Lauren Peter led the way for the Buckeyes, as both shot 9-over par and finished tied for 38th place individually.

Jessie Tyndall led Ohio State at the NCAA Championships, earning All-American honors after putting up a 80.965 overall score and finishing 14th on floor (14.400), parallel bars (13.666) and high bar (13.433). It’s the first time in his career that he’s been honored as an All-American.

Luke Smigliani and Josh Seltzer also performed well for the Buckeyes, with Smigliani putting up a 13.300 on pommel horse to come in 11th, and Seltzer finishing 13th on rings with a 13.766.

Ohio State split its final weekend series of the season with Penn State, dropping game win but pulling out game two over the No. 15 Nittany Lions to finish the regular season at 5-8 – certainly respectable after an 0-7 start to the season.

The Buckeyes fell 2-1 in game one, despite an admirable effort from Delaney Lawler.

Sarah Charley gave the Buckeyes an overtime winner in game two in a 3-2 victory. Mackenzie Allessie scored the other two goals for Ohio State.

The Buckeyes will take on Penn State again in the first round of the Big Ten Tournament on April 21 at 5 p.m. in Iowa City, Iowa.

Ohio State took one game off Indiana but dropped the other three parts of its four game weekend series, falling to 14-13 on the season.

The Hoosiers took game one 4-1, despite a strong showing from pitcher Allison Smith, who relieved starter Peyton Buresch in the second inning.

Game two went to IU as well, with Buresch surrendering five runs before being relieved on the way to an 8-0 Hoosiers victory.

The Buckeyes took game three in extra innings, thanks in part to a four-run first inning, though Ohio State nearly managed to blow an 8-2 lead. After Indiana stormed all the way back and tie the game at 9-9, Taylor Pack shot a single into right field that would ultimately win the Buckeyes the game, as it scored Meggie Otte for the 10-9 video.

Indiana took a 3-0 victory on Sunday to close out the series.

It was a tough weekend for the Buckeyes, who dropped all three of their weekend games against Maryland and fell to 13-12 on the season.