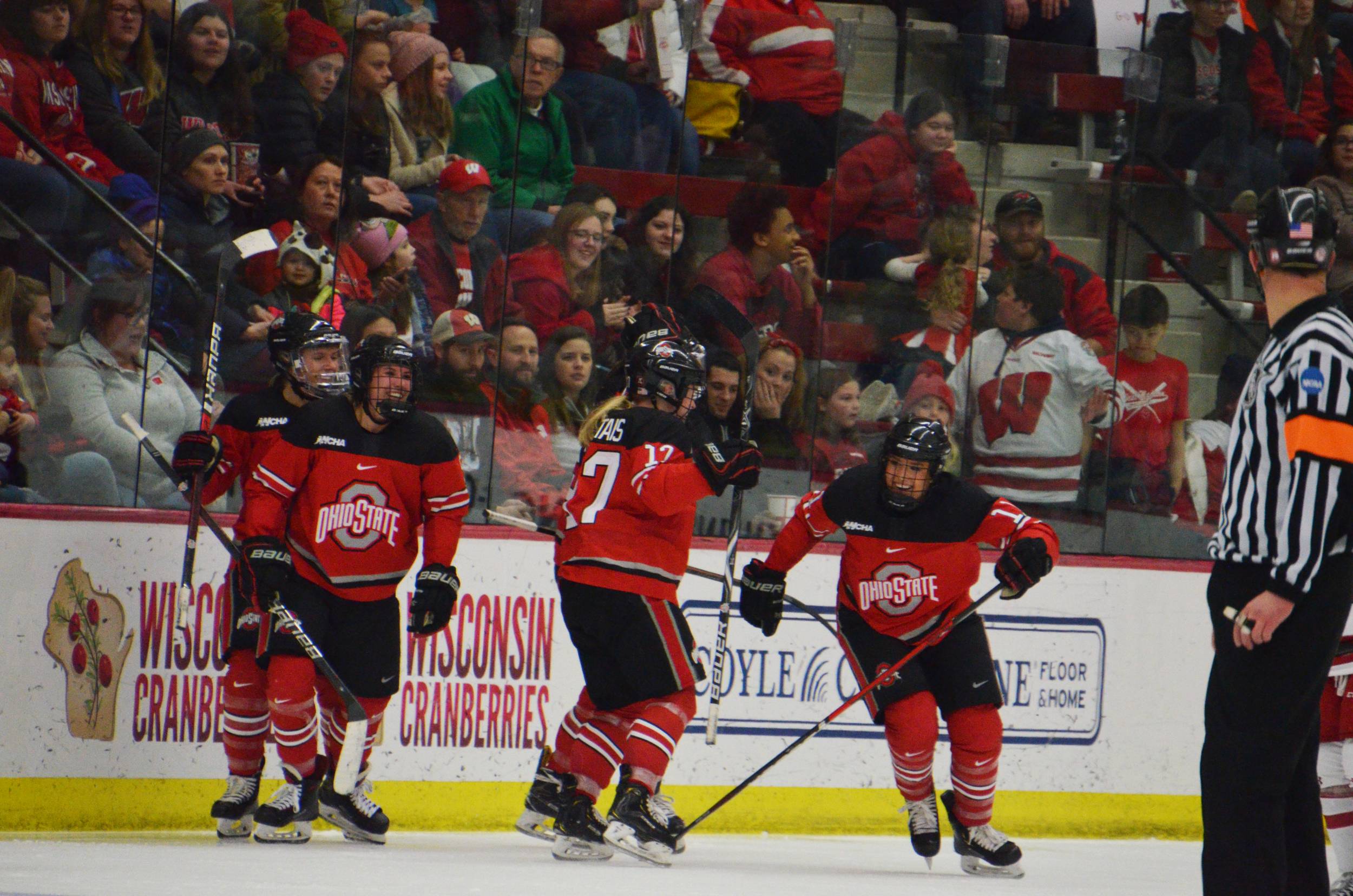 While former Ohio State football players underwent testing at the NFL Scouting Combine, the Olympic student-athletes at Ohio State competed in a busy week that saw some Buckeyes fighting to stay on track to reach their ultimate goals. What follows are brief recaps from the past week of action with links to the press releases.

Emma Maltais scored just 28 seconds into overtime, propelling No. 10 Ohio State women’s ice hockey team (19-12-2, 12-10-2-2 WCHA) to a 3-2 victory against Minnesota State (9-18-7, 3-16-5 WCHA) in a WCHA Tournament first-round showdown at the OSU Ice Rink on March 1. The Buckeyes got on the board first on Tatum Skaggs’ team-high 16th goal of the season. Minnesota State answered when Brooke Bryant scored on a power play. Ohio State regained the lead on a Lisa Bruno goal with only 1:00 left in the first period. After a long scoring drought, Bryant scored again to tie the game at 2 with just 1:26 remaining in regulation. Sophie Jaques made an excellent pass to Maltais in overtime for the game-winning goal, bringing the Buckeyes one game close to the WCHA Final Faceoff.

The No. 1 Ohio State men’s tennis team travelled to Penn State and came away with a hard-fought road win, 4-1, against the Nittany Lions on March 1.

With the victory, the Buckeyes maintain their No. 1 overall ranking and extend their undefeated season to 15-0.

The No. 14 Ohio State women’s tennis team dropped Youngstown State twice in a doubleheader at the Varsity Tennis Center on Feb. 28. The Buckeyes took the doubles point in both matches, winning the first 6-1 before sweeping the second match, 7-0.

The Buckeyes defeated Baylor, 5-2, at the Varsity Tennis Center on March 3 amid snow. Ohio State won the doubles point and four singles matches, taking three in straight sets. After downing the Bears, the Buckeyes extended their winning streak to eight matches.

The Buckeyes put together several record-setting performances on the final day of the championship meet at the Campus Recreation and Wellness Center in Iowa City, Iowa, including the 400 Free Relay squad breaking the program  record with an NCAA “A” Cut of 2:48.75.

The Ohio State baseball team fell, 3-2, against Texas A&M-Corpus Christi at Chapman Field on Feb. 25. Freshman third baseman Zach Dezenzo gave Ohio State a 1-0 lead with a two-out solo shot in the top of the fifth inning, which marked the first career home run for the Alliance, Ohio, native. Texas A&M-Corpus Christi scored three runs on only one hit and a Buckeye throwing error to take a 3-1 lead in the bottom of the eighth. Nick Anderson started the rally with a lead-off triple. After a walk, a failed pickoff attempt at first base allowed Anderson to score the equalizer. Steven Rivera-Chijin drove in the go-ahead run on an RBI groundout, scoring a runner from third. Then, a sacrifice fly made it 3-1. The Buckeyes answered in the top of the ninth when Brady Cherry drove in Noah West on an infield single. However, Ohio State stranded two runners and came up one run short. Junior right hander Jake Vance tossed four scoreless innings to start the game and was relieved by freshman right hander Will Pfennig, who put up three more zeros on the scoreboard. Freshman right hander Bayden Root received the loss, allowing three runs (two earned) on two hits and two walks.

The Buckeyes began a four-game series against Bethune-Cookman with a 4-3 loss at Jackie Robinson Field on March 1. Redshirt freshman left hander Seth Lonsway was solid outside of allowing a two-run infield single, limiting Bethune-Cookman to five singles and three walks. The southpaw starter surrendered three runs in 4.1 innings, and recorded a season-high 11 strikeouts, which marked the most by an Ohio State pitcher since Alex Wimmers struck out 11 against Penn State on April 23, 2010. Ohio State showed life when Brady Cherry hit an infield single, sparking a series of hits in the seventh. Conner Pohl singled, and Brent Todys put the Buckeyes on the board with a two-out RBI single, cutting the deficit to 4-1. Dezenzo came through with a two-out, two-run RBI single in the ninth, scoring Dominic Canzone and pinch runner Ridge Winand, but the rally stalled out one run short.

The Buckeyes defeated Bethune-Cookman, 16-9, at Jackie Robinson Ballpark on March 3. Ohio State jumped out to a sizzling start, scoring six runs in the first inning and eight runs in the second against the Wildcats. West batted 2 for 5 with one triple, two runs scored and three RBI. Freshman Nolan Clegg went 2 for 4 with one run scored and two RBI. Nate Romans hit 2 for 4 and smacked a home run. Southpaw starter Griffan Smith earned the win, improving to 3-0 on the season.

The Buckeyes dropped the series finale against Bethune-Cookman, 8-3, at Jackie Robinson Ballpark on March 4. Ohio State (7-5) split the four-game road series with Bethune-Cookman (5-6) after allowing six runs on four hits and one error in a sloppy second inning. Despite out-hitting the Wildcats, 11-8, the Buckeyes could not overcome their horrid start. Vance went five innings to start the game, allowing seven runs (two earned) on five hits and four walks, while striking out three. Milheim pitched 2/3 of an inning, walking one.  Right-handed reliever Will Pfennig gave up one run on three hits and one walk, while recording one strikeout in one inning of relief. Left-handed reliever Andrew Magno tossed 1.1 scoreless innings on only 12 pitches with one walk.

The No. 8 Ohio State University men’s gymnastics team turned in a big-time performance against an elite opponent, posting a season-high and defeating Penn State 413.150-409.000 at the Arnold Challenge on March 2.

The No. 23 Ohio State women’s gymnastics team came away victorious against No. 24 West Virginia and Temple, hitting season-highs on all four events and registering a score of 196.850.

The Buckeyes’ score of 196.850 marked a season-best performance and tied the fourth-highest score in program history.

The Ohio State women’s golf team finished 10th after tying for the second-best score in the final round with a 5-under 283 at the Westbrook Spring Invitational at Westbrook Village Golf Club on Feb. 25.

Freshman Aneka Seumanutafa stole the show, winning with a 12-under 204 in just her second collegiate tournament. Seumanutafa concluded the tourney with a 5-under 67 to secure the victory. Seumanutafa totaled 17 birdies, which represented the most by any player in the field.

Junior Liza Hernandez and sophomore Ali Beekhuizen led the team in scoring with three goals apiece. The Buckeyes improved to 5-1 , knocking off Niagara, 16-12, at the Woody Hayes Athletic Facility on March 3.

A five-goal performance from sophomore Jackson Reid led the Buckeyes with a five-goal outing, and Josh Kirson was solid in goal.

Both attacking and service errors plagued the reeling Buckeyes as they dropped a winnable match.