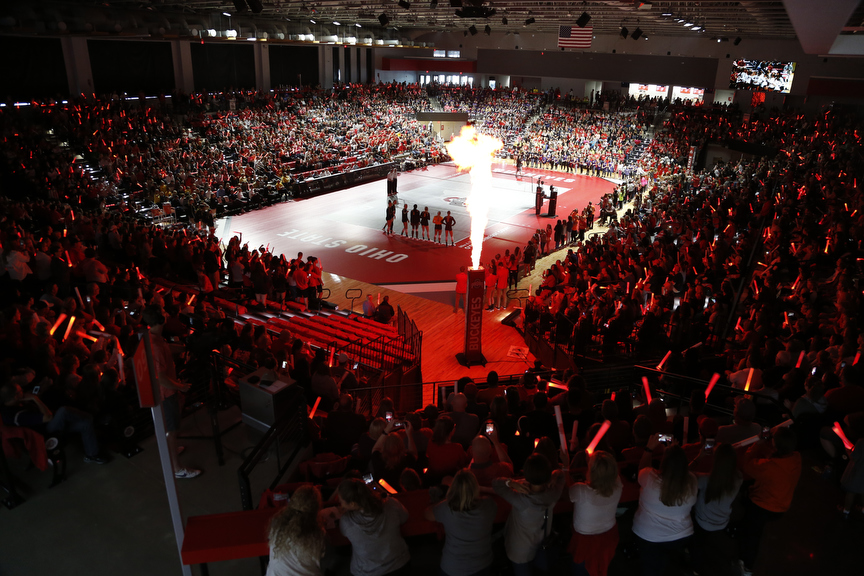 Ohio State saw the last of the non-football fall sports come to an end this week, as the women’s volleyball team closed out an up-and-down season. All-in-all, it was a good week for the Buckeyes, who went 3-2, led by a big win for wrestling.

After a tough loss to Virginia Tech two weeks ago, Ohio State bounced back on Dec. 1 with a big win over Cornell, 23-9. In front of a sold out crowd at the Covelli Center, the Buckeyes were never truly challenged, jumping out to a good start with wins by Luke Pletcher (8-6) at 141 and Sammy Sasso (12-9) at 149 to take an early 6-0 lead. Colton Yapoujian defeated Elijah Cleary, 3-2 to cut the deficit to three, but the Buckeyes quickly bounced back with wins by Ethan Smith (12-4) at 165 and Kaleb Romero (6-5) at 174 over No. 11 Brandon Womack.

The Buckeyes will wrestle next in Las Vegas on Dec. 6 and 7, in the Cliff Keen Las Vegas Invitational.

A seven game unbeaten streak spanning back to the beginning of November came to an end on the final day of the month, as Cornell crushed Ohio State, 5-1, in game two of a weekend series. Liz Schepers was the lone scorer for the Buckeyes, finding the back of the net on a first period power play off of an assist from Jincy Dunne. Cornell scored the next four goals to secure the blowout win, knocking Ohio State to 10-4-4 on the season.

It wasn’t a wasted weekend for the Buckeyes however, as they were able to grab a 3-1 win over Cornell on Friday night. Emma Maltais tallied two second period goals, and Madison Bizal added a third.

“We’ve been talking about 60 minutes of hockey and I think today we really played 60 minutes of hockey,” head coach Nadine Muzerall said. “We knew we needed to in order to beat a team like Cornell. It was a great back and fourth game, I give Cornell and lot of credit too.”

The Buckeyes have a weekend off before squaring off with Princeton on Dec. 14 and 15.

Ohio State’s season came to a close one game short of a potential NCAA tournament berth, with a 3-0 loss to No. 6 Nebraska on Saturday night. The Buckeyes were able to beat Iowa in four sets earlier in the week, but that wasn’t enough for the Buckeyes, who finished their season at 15-17.

Gabby Gonzales tallied 10 kills in the loss to Nebraska, her 14th game in double digits on the season. For a full look at Gonzales and fellow freshman sensation Jenaisya Moore, be sure to check out the newest edition of Buckeye Sports Bulletin, dated Dec. 7, 2019.