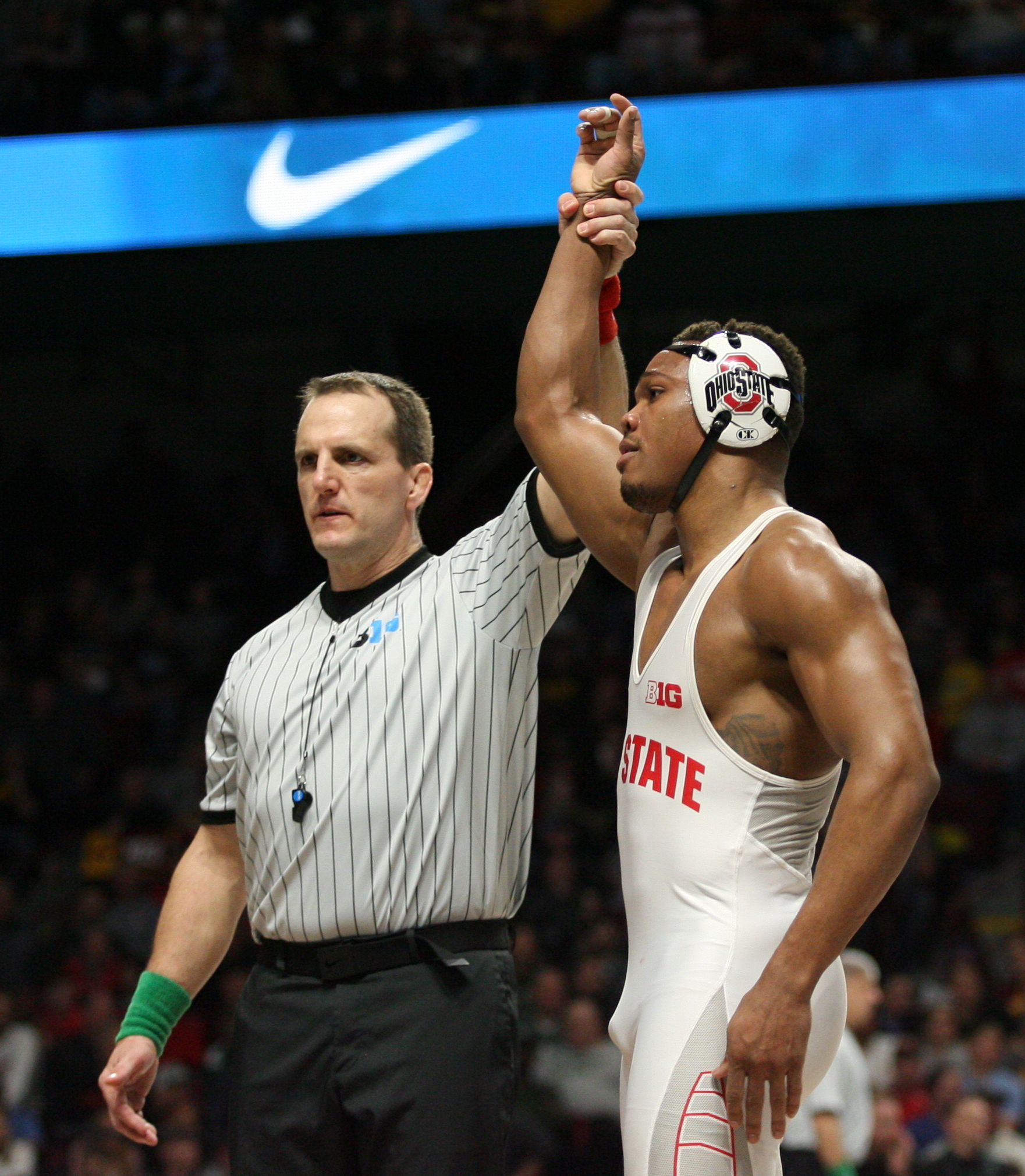 While the Ohio State football team kicked off spring practice and the men’s basketball team concluded its regular season, many Olympic-sport student-athletes battled for conference and national titles. Some donning the scarlet and gray came up short, but many triumphed at their respective sports’ highest stages.

What follows are recaps of the events that occurred in the past week for Ohio State Olympic-sport student-athletes, including links to the press releases.

The Ohio State wrestling team came away from a second-place finish at the Big Ten Championships with two champions, three runner-ups and nine tickets punched for the NCAA Championships in Pittsburgh, Pa.

The Big Ten Championships will be reviewed in more depth in the upcoming issue of Buckeye Sports Bulletin, in addition to a preview of the NCAA Championships.

The Ohio State track and field team concluded an excellent indoor season with two national champions, a fourth-place finish and a fifth-place finish. The women’s team took third overall in the NCAA Championships at the Birmingham CrossPlex on March 9.

Rizk took home the first women’s mile title in Ohio State history, running a 4:37.63 with a remarkable final kick to take first. Olatoye bested her school record in the weight throw, taking the national title with a 24.46-meter toss, the sixth-longest throw in NCAA history. Battle finished fifth overall in the 200m with a 23.07, helping the women’s team to a fourth-place finish with just three competitors.

Senior Nick Gray also concluded an excellent indoor season, taking fourth in the nation in the 200m, finishing in 20.76 seconds and scoring five points for the men’s squad.

The Buckeyes’ season comes up short, falling to 20-13-2 on the year, while the Badgers improve to 31-4-2. Despite many big wins against elite competition, Ohio State was unable to draw an at-large tournament bid after an up-and-down season in the vaunted WCHA.

The Ohio State baseball team fell, 7-1, against Michigan State at the 2019 FIrst Pitch Invite at Fluor Field in Greenville, S.C, March 8.Michigan State right-handed pitcher Mike Mokma tossed a complete-game with 11 strikeouts and no walks to earn the win against the Buckeyes. Ohio State scored its only run on a double-play groundout by Brady Cherry that scored Matt Carpenter.

The Ohio State baseball team lost, 8-5, against Western Carolina at Fluor Field on March 9. The Catamounts (8-5) rallied with five runs in the seventh to topple the Buckeyes (7-7). Western Carolina reliever Jacob Corn received the win and improved to 2-0, while Ohio State freshman reliever Mitch Milheim took the loss, falling to 0-1. Noah West extended his hit streak to six games, while Dominic Canzone extended his to three.

The Ohio State softball team split its opening day at the Husky Classic, defeating Seattle, 6-4, in eight innings before falling to No. 6 Washington, 3-0. Claire Nicholson led the way against Seattle on March 7, hitting 4 for 4 with two runs scored and one run batted in.

Ohio State (11-6) wrapped up its trip at the Husky Classic with a narrow 3-2 victory against Northern Illinois on March 9. Right-handed pitcher Morgan Ray (5-3) went five innings, allowing just two runs and four hits, while striking out five batters in the victory.

The No. 22 Ohio State women’s gymnastics team sent seniors Amanda Huang, Janelle McClelland and Jamie Stone out with a win against Bowling Green on Senior Night, 195.875-194.875.

“The seniors have been great,” Ohio State head coach Meredith Paulicivic said. “They have been really helpful to me with turning the culture of this program around. They’ve been great leaders in and out of the gym. I couldn’t have done it without last year’s seniors and this year’s seniors believing in my vision for the program, having my back, sticking to the plan. I’m super appreciative of the support that I’ve gotten from this class. They will be missed. They’re all great kids.”

The Ohio State women’s golf team finished No. 9 at the Lady Gator Invitational at Mark Bostick Golf Course in Gainesville, Fla, on March 10.

Freshman Aneka Seumanutafa finished No. 8 for the tournament at 1-over par. Seumanutafa posted a career-best 64 in the second round, and shot a 2-over 72 to clinch eighth. Fellow freshman Lauren Peter scored a 5-over 75 in the final round to tie for 41st, while junior Adeena Shears notched a 4-over 74 to tie for 50th.

The No. 9 Ohio State men’s lacrosse team went on a 10-0 run to take a 14-8 victory against Hofstra at James M. Shuart Stadium on March 9.

Tre Leclaire led the way with four goals, while freshman Jack Myers scored three goals and dished three assists. Seven different Buckeyes scored, and the 10-goal rally to take a 14-4 lead was too much for the Pride to overcome.

The Ohio State fencing team competed against six other schools at the NCAA Midwest Regional for the final opportunity to earn a championship. Eight Buckeye fencers placed in the top three in their respective weapon categories.