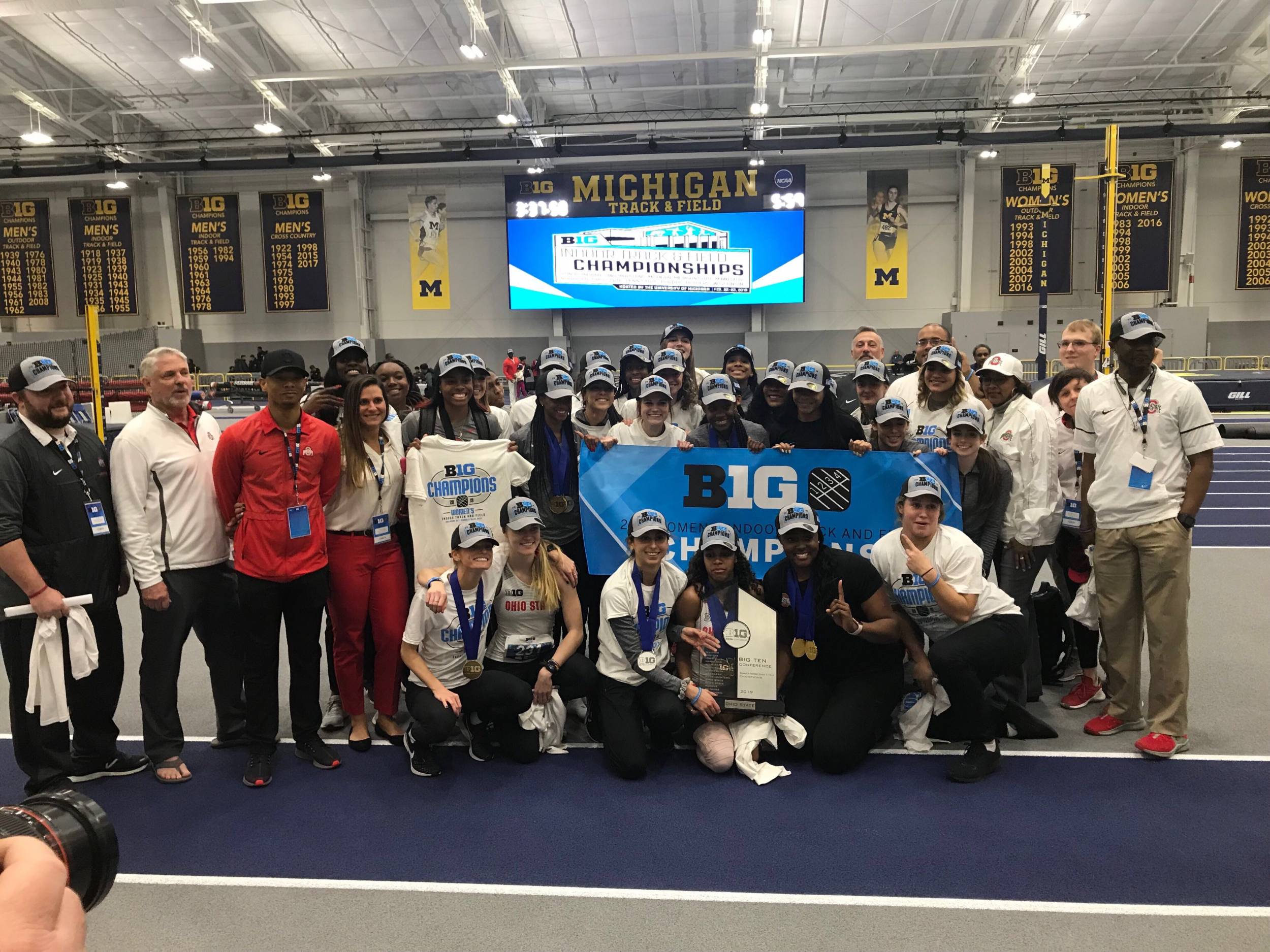 The last full week of February saw many of Ohio State’s best student-athletes in action. Many teams and individuals continued their excellent spring seasons, and some were even crowned champions. The men’s tennis team won the indoor national championship, and the fencing team and the women’s track and field team both won conference titles. What follows are recaps of the past week’s events in Ohio State sports, along with links to the press releases.

Jordan earned bonus points with a tech fall, giving the Buckeyes a 5-0 lead, and Hayes and Moore gained four points apiece with major decisions. After a 25-0 start, Ohio State dropped three consecutive matches to ranked opponents. Malik Heinselman fell 6-0 to No. 8 Vito Arujau, No. 6 Luke Pletcher lost 2-1 to No. 11 Chas Tucker, and No. 3 Joey McKenna fought hard before dropping a 7-5 match to reigning national champion No.1 Yianni Diakomihalis. Martin maintained his perfect record (17-0) to conclude the regular season.

The No. 1 Ohio State men’s tennis team dominated the ITA Indoor Team National Championship last weekend, and capped it with a 4-2 victory against Wake Forest in the final. The Buckeyes avenged their loss in the national championship a year ago by taking down the Demon Deacons The national title marks the second indoor championship for Ohio State, winning first in 2014.

Ohio State continued its excellence in a midweek matchup with Kentucky at the OSU Varsity Tennis Center on Feb. 20. The Buckeyes won every doubles match and every singles match, dominating the No. 49 Wildcats, 4-0.

The No. 1 Buckeyes welcomed No. 12 Notre Dame for a Sunday showdown at the OSU Varsity Tennis Center on Feb. 24, and controlled the match against the Fighting Irish, winning 6-1. JJ Wolf, John McNally, Kyle Seelig, Martin Joyce and Alex Kolbelt each won their singles matches, and Hunter Tubert lost for just the second time on the season. The nation’s No. 1-ranked men’s tennis player, Wolf, improved to 12-0 on the year, while Kolbelt improved to 11-0.

The Ohio State baseball team improved to 4-0 in its one-game matchup at Florida Golf Coast on Feb. 18. The Buckeyes won 2-0 behind an impressive combined shutout effort by their pitching staff. Sophomore lefthanded pitcher Griffan Smith struck out a career-high seven batters in five innings to start the game. Freshman Bayden Root impressed in three scoreless innings of relief in his collegiate debut before giving way to senior southpaw Andrew Magno, who recorded his first career save in a scoreless ninth.

Senior Brady Cherry rocketed a home run off FGCU starter Evan Lumbert to give the Scarlet and Gray a 1-0 lead in the top of the second. Then in the sixth, Cherry singled and scored on a timely two-out RBI single by Noah West, extending the Ohio State lead to 2-0.

The Buckeyes fell, 5-1, against Brigham Young at Whataburger Field in its opening game at the 2019 Kleberg Bank College Classic on Feb. 22. Ohio State redshirt freshman lefthanded starter Seth Lonsway surrendered five runs on four hits in the bottom of the third. Ohio State scored in the sixth when senior second baseman Kobie Foppe hit a sacrifice fly to bring in senior outfielder Malik Jones, who had doubled.

Ohio State lost against Texas A&M-Corpus Christi, 8-7, in heartbreaking fashion at Whataburger Field on Feb. 23. Corpus Christi first baseman Luke Marbach hit a walk-off, two-run home run in the bottom of the ninth, which was debated as the umpires ruled it was above the right-field foul pole for a home run.

Cherry had a big day for the Buckeyes at the plate, hitting 3 for 4 with one home run, three RBI and one walk. Freshman right-handed starting pitcher Garrett Burhenn faced some trouble in his second career start, but handled the pressure well. He earned a no decision in five innings, scattering three runs on eight hits and four walks, while striking out six. Magno received the loss.

“Garrett gave us a workman-type outing today and that was one of the bright spots,” head coach Greg Beals said. “Obviously he didn’t have his best stuff against a good-hitting ball club, but he was able to battle and get us through five innings. I was happy with the way we swung the bat for the most part. We saw somethings that we liked tonight from that standpoint. We fueled their comeback a little bit, but give their hitters credit. (The umpire) said it hit the foul pole. Whatever color you were wearing was how you saw the last play of the game.”

The Buckeyes bounced back from the tough loss on the following day with an 8-3 victory against Oral Roberts at Whataburger Field on Feb. 24. Smith improved to 2-0 by striking out five in five innings of work. Junior rightfielder Dominic Canzone led the way for Ohio State at the plate, homering and driving in four runs, while junior first baseman Conner Pohl, junior shortstop Noah West and sophomore catcher Brent Todys each totaled two hits apiece.

The No 10 Ohio State women’s ice hockey team took two points from No. 1 Wisconsin with a 1-1 tie and shootout victory at LaBahn Arena on Feb. 22. The Buckeyes trailed 1-0 before a Tatum Skaggs goal tied the game at 1 on assists from Emma Maltais and Jincy Dunne. Goaltender Andrea Braendli stopped 52 Badgers shots during the game, and then put down all three shootout attempts. Maltais game through with the shootout goal needed to secure the win.

The No. 10 Buckeyes (18-12-2, 12-10-2-2 WCHA) won its second consecutive shootout against No. 1 Wisconsin (28-4-2, 18-4-2-0 WCHA) after a 2-2 tie at LaBahn Arena on Feb. 23. Braendli stopped 40 Badger shots, and was once again stellar in the shootout, coming away with two critical stops. Goals from Maltais and Liz Schepers gave Ohio State a 2-0 lead, but the Badgers battled back to force overtime. Fortunately for the Buckeyes, their freshman goaltender was again unfazed in the net.

“Andrea is phenomenal, and that’s what you need to get to that next level in the postseason,” head coach Nadine Muzerall said. “We need a goalie that’s going to be strong, someone we can rely on. She’s our foundation and we have to build around her, again, an absolutely phenomenal performance from her.”

The No. 11 Ohio State women’s tennis team shut out Cleveland State, 7-0, at the OSU Varsity Tennis Center on Feb. 20. The Buckeyes dropped just one set while sweeping the singles matches.

The Buckeyes continued their dominant day by taking down Akron, 7-0, too. Senior Andrea Ballinger, junior Danielle Wolf, sophomore Luna Dormet and freshman Kolie Allen all posted singles and doubles wins for the Scarlet and Gray against the Zips.

Ohio State traveled to Tempe, Ariz., and defeated Arizona State, 4-3, at the Whitman Tennis Center on Feb. 23. Allen was able to come away with a victory in the third set on court three to clinch the Buckeye victory. Wolf, Dormet and Isabelle Boulais won in straight sets during singles play for the Scarlet and Gray.

The Scarlet and Gray swept Texas Christian, 7-0, in a neutral-site match in Tempe, Ariz., on Feb. 24. Ohio State won five of six singles matches in straight sets for the shutout victory.

“It was a good day today,” said head coach Melissa Schaub. “Kolie Allen just keeps stepping up for us. Andrea Ballinger came up big in doubles to clinch the doubles point. I thought today was a great team win from everyone.”

The Ohio State women’s swimming and diving team finished in third place at the Big Ten Championships at the Counsilman-Billings Aquatics Center at Indiana with a team score of 1,162.5 points. Junior Kathrin Demler became the first 200 fly champion for the Buckeyes since 2013, finishing with the No. 2 time in program history at 1:55.23.

The Ohio State men’s golf team placed ninth at the Puerto Rico Classic, closing out the competition by shooting 296 (+8) for the final round to move to 12-over for the tournament. Will Grimmer shot 69-73-70 to post a 212 and shoot four-under, finishing highest among Buckeyes by tying for seventh. Caleb Ramirez carded 216 (69-72-75), coming in at even par and placing tied for 23rd. Daniel Wetterich took 43rd place, Will Voetsch finished tied for 60th, and Laken Hinton tied for 70th. Kevin Stone participated in the Puerto Rico Classic individual event, and shot a career-low 218 (72-73-73), taking third place in what was the best finish of his career.

The Ohio State men’s volleyball team has battled a multitude of injuries this season and have been far from its normal form, but did not go down easily against No. 10 Lewis University. The Flyers entered St. John Arena with a 12-0 sets advantage in conference play this season after sweeping each of their first four MIVA opponents. However, the Flyers faced its toughest challenger of the year to date in Ohio State, who took a pair of sets, but eventually fell in the fifth (25-21, 18-25, 26-24, 17-25, 15-11).

The Ohio State softball team defeated Army, 4-0, behind a no-hitter and a grand slam in its Mary Nutter Collegiate Classic opener. Skylar Hayward and Morgan Ray combined to strike out 10 hitters in their no-hit performance. Kaitlyn Coffman drilled the grand slam for the Buckeyes, driving in all four of their runs.

The Buckeyes continued their shutout softball with two more shutout victories on the Mary Nutter Collegiate Classic. Ohio State defeated Utah, 2-0, before taking down Duke, 6-0, in the nightcap.

The Scarlet and Gray capped off a 4-0 weekend at the Mary Nutter Collegiate Classic with a 5-1 victory against New Mexico State on Feb. 24. With the win the Buckeyes improved to 8-4 overall, while the Aggies fell to 9-5.

The Ohio State women’s gymnastics team placed fifth with a score of 196.400 at the Big Five Meet at the Huntington Center in Toledo, Ohio, on Feb. 23. Senior Jamie Stone stood out for the Buckeyes, scoring a 9.925 on floor exercise to win gold, marking a season-long, team-best score.

The No. 11 Ohio State men’s lacrosse team battled to a 16-13 victory against Bucknell at Ohio Stadium on Feb. 23. Freshman Jack Myers made his home debut a special one, scoring seven times and tallying an assist.

The Ohio State women’s lacrosse team (3-1, 0-0 Big Ten) dropped its first match of the season, 19-10, to No. 20 Notre Dame (4-0, 0-0 ACC) at the Woody Hayes Athletic Center on Feb. 22. Senior Baley Parrott led the Buckeyes with five goals, while junior Jill Rizzo shut down 11 of 14 free-position attempts by the Fighting Irish.

The Ohio State fencing team won its sixth consecutive Midwest Fencing Conference Championship title on Feb. 24. In addition to winning the overall gold medal, the Buckeyes also secured a men’s squad title. The team earned a total of 1,575 points, defeating the second-place finisher, Northwestern by 65 points. The conference championship victory marks No. 14 in the history of the Ohio State fencing program.