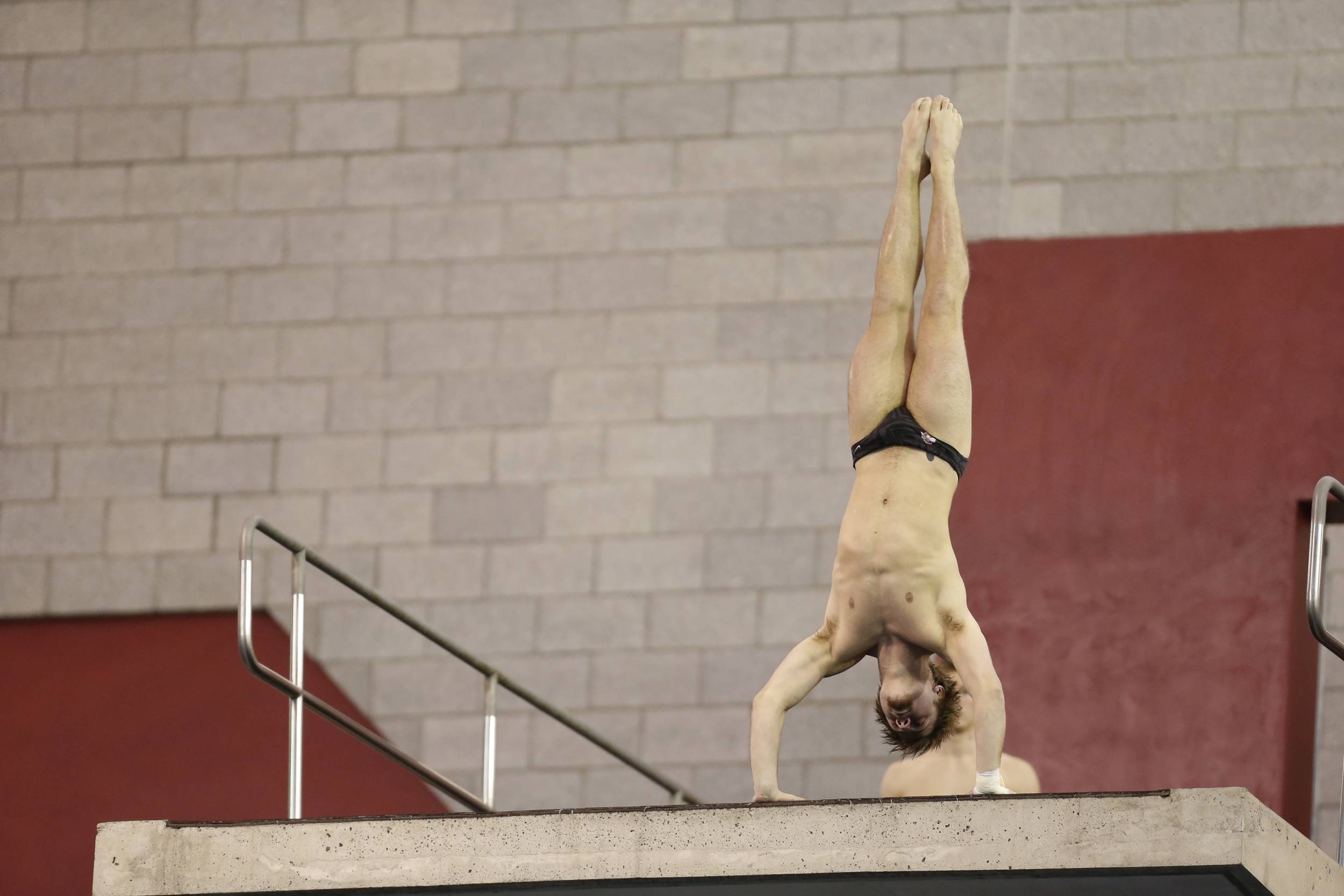 While some of the Olympic-sport seasons like baseball and softball are just ramping up, other Ohio State student-athletes are vying for conference and national championships. In a busy week where the Ohio State men’s tennis team suffered its first losses of the season, other teams and student-athletes donning scarlet and gray flourished. The OSU diving team had a statement performance while attempting to qualify for nationals and senior right-hander Morgan Ray proved to be unhittable. What follows are recaps of all of the Olympic-sport events in the past week of Ohio State athletics, including links to the press releases.

The Ohio State baseball team fell to Furman, 11-10, in 10 innings despite racking up 15 hits at Latham Baseball Stadium on March 11.

John Michael Boswell delivered the deciding blow with a walk-off home run in the bottom of the 10th. The Paladins rallied to score two runs in the bottom of the ninth to send the game to extra innings and Ohio State right-handed reliever Will Pfennig (0-1) received the loss.

After racing to a four-run lead through three innings, Ohio State surrendered two runs in the fourth, one in the fifth and sixth, and three in the seventh to squander the game. Left-handed reliever Andrew Magno (0-2) received the loss. Cherry went 3 for 4 with two doubles and two RBI and freshman third baseman Zach Dezenzo had a three-hit game, including a double.

Ohio State got back on track in its home opener, tallying a season-high 18 hits in a 14-3 victory against Lipscomb at Nick Swisher Field at Bill Davis Stadium on March 15.

Dezenzo had a memorable Bill Davis Stadium debut, going 2 for 4 with two home runs and three RBI. Freshman right-hander Garrett Burhenn was also solid in his home debut, improving to 3-1.

The Buckeyes lost, 9-3, against Lipscomb at Nick Swisher Field at Bill Davis Stadium on March 16, sealed by a Cade Sorrells grand slam in the top of the ninth for the Bisons.

The Scarlet and Gray claimed a series win in their home-opener weekend against Lipscomb in dramatic fashion with a 7-6 victory at Nick Swisher Field at Bill Davis Stadium on March 17.

The Buckeyes (9-10) had to hold off a ninth-inning rally by the Bisons (10-8), surviving a bases-loaded jam to end the game. With two outs and the bases loaded, junior right-handed reliever Joe Gamm came through with a strikeout and earned his first career save.

Redshirt freshman left-handed pitcher Seth Lonsway improved to 2-2, allowing only one run on three hits with five strikeouts in a six-inning start. Pohl led the Buckeyes at the plate, going 3 for 4 with one homer, two RBI, two runs scored and one hit by pitch. Dezenzo also homered and drove in two runs in another multi-hit game for the freshman.

Junior Lara Tarvit finished fifth, posting a 527.20, and will compete on both 1-meter and platform for the women’s team. Junior Lexie Barker scored 507.80, good enough for eighth place. Barker also qualified to compete on 3-meter. Sophomore Genevieve Angerame also performed well enough to qualify on 3-meter for the OSU women.

All five men’s divers finished in the Top 12 on platform, qualifying for the NCAA Championships. Sophomore Jacob Siler placed third with a score of 722.30, followed by senior Christopher Law, who was fourth, tallying 720.15. Freshman Jacob Fielding came in sixth with a score of 698.05, senior Aaron Daniels-Freeman took ninth at 660.80 and sophomore Joey Canova was No. 11, posting a 642.15.

Ohio State took a 1-0 match lead through doubles play with big performances from Martin Joyce, Kyle Seelig, James Trotter and Alex Kobelt. The doubles-point victory marked the 17th for the Buckeyes in as many tries.

However, the Aggies took control of the match during singles play and became the first team to oust the Scarlet and Gray this season.

The Buckeyes were without No. 1 J.J. Wolf.

Again without its top player, the Ohio State men’s tennis team lost its second consecutive match, 4-1, to No. 4 Texas on March 14.

The Buckeyes lost their first doubles point of the season, giving them an uphill battle to climb against the talented Longhorns in singles play. Despite a valiant effort in a few back-and-forth matches, Ohio State came up short without Wolf, who is ranked No. 1 in the nation.

The No. 22 Ohio State women’s gymnastics team concluded its regular season with a quad meet against West Virginia, No. 24 Penn State and NC State, posting a score of 194.925 on March 17.

On the beam, sophomore Danica Abanto posted a 9.850, tying her career-high and leading the team. Sophomore Morgan Lowe scored a 9.825 and senior Jamie Stone earned a 9.800. Freshman Sydney Jennings led the Buckeyes on vault for the third-straight week, notching a 9.85

Ohio State will next compete in the Big Ten Championships on March 23 at Penn State.

Ray, the Buckeyes’ ace, pitched the first solo no-hitter of her career, completing a doubleheader sweep of Portland State on March 12.

The Buckeyes connected on four home runs in their 8-4 victory before rolling to a 7-0 win behind Ray’s untouchable performance.

In the sweep of the Vikings, head coach Kelly Kovach Schoenly reached the 400th win of her 13-year career, which is her seventh as leader of the Scarlet and Gray.

Ohio State rebounded from a 4-0 loss to Weber State with a 2-0 win against Lehigh in its opening day at the GCU Invite on March 15.

Ohio State cruised to a 12-3 victory in six innings against Lehigh on day two at the GCU Invite, driving in a season-high 12 runs in six innings.

The Buckeyes fell in the second game to Grand Canyon, 8-7, on March 16. Senior shortstop Lilli Piper hit .857 on the day with six hits, two RBI, four runs scored and a slugging percentage of 1.000.

The Ohio State women’s golf team tallied its best finish of the season as a team, placing third at 3-over par at the Tar Heel Classic at the Casa de Campo Teeth of the Dog Course on March 16.

“I am so proud of the effort and mental toughness our team showed this week,” Ohio State head coach and director of golf Therese Hession said. “We were steady and patient. It was an amazing golf course and experience for our student-athletes.”

Freshman Aneka Seumanutafa put together her third-straight Top-10 finish, placing second at 5-under. Fellow freshman Lauren Peter posted the best finish of her career, tying for ninth at 1-over.

Senior Daniel Wetterich had his best performance of the season at the Linger Longer Invitational, placing eighth and finishing four-under par.

Senior Caleb Ramirez finished in a tie for 13th at two-under par. Senior Will Voetsch finished in 40th-place at five-over. Sophomore Kevin Stone finished eight-over and placed 54th. Senior Will Grimmer completed the tournament 16-over par, finishing in 75th place.

The Ohio State women’s lacrosse team rallied back against UMass, but came up short, 15-14, after trailing, 14-9, with just over five minutes remaining on March 11.

Shawn Hughes and Jamie Wolmering earned their first career starts, while Jason Bruggemann and Robbie Murphy each made their collegiate debuts in the opening set.  Hughes paced the Buckeyes in kills (nine), digs (eight) and aces (three) while Wolmering led the team in attacking efficiency (.833) and lead all players with three blocks. Bruggemann connected on 2-of-3 attempts for kills and Murphy totaled four kills.