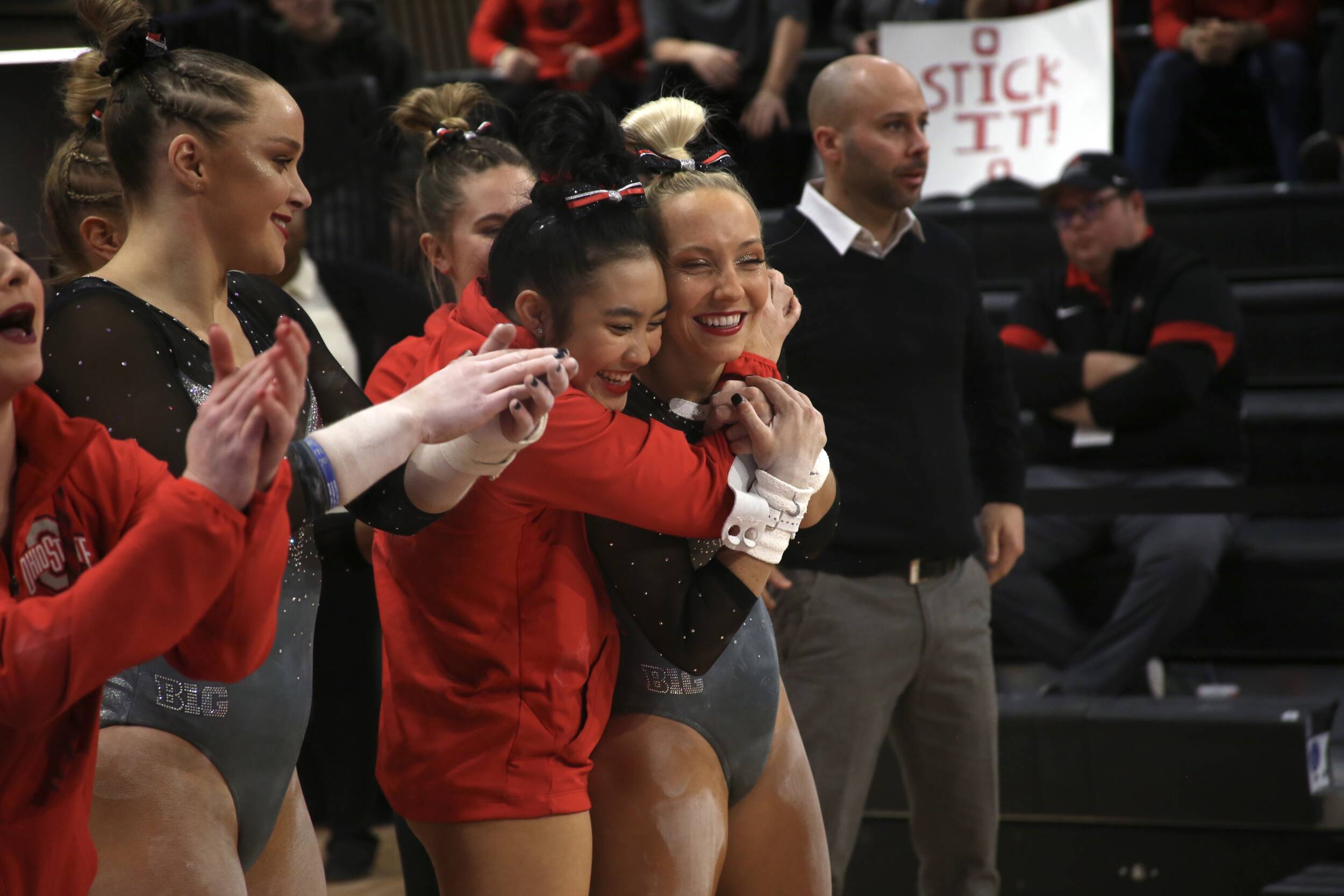 Ohio State introduced a brand new coach on Jan. 21, as former women’s volleyball player Jen Flynn Oldenburg will take over at the helm of her alma mater. For a full feature on Oldenburg, be sure to check out the upcoming print edition of Buckeye Sports Bulletin.

Meanwhile, men’s and women’s tennis, along with women’s hockey helped put together a solid week for the Buckeyes. Overall, Ohio State went 10-3 in the week, along with finishes of seventh, first, second and third in track and field and swim and dive (women’s and men’s) respectively.

44 team points helped Ohio State to a seventh place finish at the Invitational Columbia Challenge over the weekend. Junior Tyler Johnson led the Buckeyes as he won the 400-meter dash with an impressive 46.84 second finish.

Johnson’s performance was easily the best for the Buckeyes, with Cameron Cooper serving as the only other top five finisher. He put up a 1:51.09 in the 800-meter run placing fourth.

Ohio State will run next at the Texas Tech Invitational on Jan. 31.

Meanwhile, at the same event, the women’s team managed a first place finish, edging out No. 8 South Carolina by five and a half points, finishing with 70. Abby Nichols won the mile, running a 4:45.86 time, while 4*400 relay put up its own first place finish with a 3:39.52, led by Alyssa Marsh, Jayden Wood, Aziza Ayoub and Tamani Wilson.

The women’s team will also compete at the Texas Tech Invitational.

It was another sweep for the women’s hockey team, as it extended its winning form to 6-1 in the last seven games, improving overall to 16-6-4 after two wins over Quinnipiac. While the wins won’t help Ohio State in conference play, they do still serve as big wins over a talented non-conference foe. The first of two wins came in a defensive battle, with Ohio State winning 2-1, thanks to a Gabby Rosenthal game winner. Sara Saekkinen scored as well.

Game two saw more offense but the same result, with a 3-2 win for the Buckeyes. Madison Bizal and Teghan Inglis found the back of the net, while Rebecca Freiburger put away a game winner in the final period of play.

Ohio State will play next weekend against Bemidji State.

Ohio State’s women’s swim and dive team finished second at the Annual Shamrock invitational, behind Notre Dame but ahead of Akron and Iowa. The Buckeyes put up 975 points, not enough to topple Notre Dame’s 1,114.5. Ohio State’s top performer was Sarah Sperber, who finished second in the 200-meter breaststroke with a 2:14.69 time. Taylor Petrak also found the podium, placing third in 100m freestyle at 50.00 seconds.

The Buckeyes will hit the pools next on Jan. 31 against Pitt.

The loss against Iowa served as a setback but was not a fully lost trip, as Ohio State’s stars shined as bright as ever. Kollin Moore and Luke Pletcher, both top ranked in their weight classes scored victories over unranked foes, while No. 6 Sammy Sasso stole the show at 149-pounds. Sasso toppled top ranked Pat Lugo, 2-1 on tiebreak after two sudden victory periods. It was a heroic effort from the redshirt freshman, and one that has him marked as a serious title contender.

Against Minnesota, Ohio State staged a late surge to pull away, riding wins from Jordan Decatur, Pletcher, Sasso, Ethan Smith, Kaleb Romero and Moore. Sasso was again the star, beating No. 4 Brayton Lee, 4-2, but Pletcher put in a vintage performance as well, defeating a top opponent in Mitch McKee, 12-6. Decatur’s 16-6 major decision over Jake Gilva served as a turning point in the match.

Ohio State will take the mat next at home on Jan. 31 against Maryland, one of the league’s weaker teams.

Ohio State took care of USC in the first part of a southern California duo of matches, but fell for the first time in the season against UCLA on Jan. 26, 3-1. The victory against USC on Jan. 24 and served as another sweep for the Buckeyes, as Martin Lallemand helped lead an impressive Buckeye attack (25-20, 25-21, 25-22).

The Buckeyes will have a chance to get back on track on Jan. 31 against Saint Francis and Penn State a day later.

“I’m very proud of the team today coming up with a huge improvement from last weekend, ” said head coach Rustam Sharipov. “I think we’re on the right path. In my heart, the guys improved a lot and it speaks for itself the improvement in the score from last weekend to this weekend. I think we can go back and get better for next weekend against The Team Up North. We look forward to seeing all you Buckeye fans coming to support us, go Bucks!”

“We picked up a win against two really great teams,” said head coach Meredith Paulicivic. “We kept fighting and fighting for every tenth, which I think is important. We’re moving in the right direction. Today was another step towards finding our groove.”

Claire Gagliardi placed first on the floor exercise with a career-high 9.925, and was named team MVP.

The women’s team will next face off with No. 7 Minnesota on Feb. 1.

It was a perfect weekend for Ohio State at the ITA Kickoff Championship, with the men’s team defeating Purdue, Tulsa and Toledo on the way to an ITA Championship. Ohio State beat all three foes 4-0, tearing through the competition on the back of elite play from stars John McNalty and Cannon Kingsley.

The women’s team was able to upset No. 24 Wake Forest 4-0 in its ITA Kickoff Weekend opener, before stunning host school No. 10 Oklahoma State, 4-3, to claim a spot in the ITA Team Indoor Championship on Feb. 7-10.

“We had to fight through a lot today. That was one of the toughest places we have ever played and Oklahoma State deserves a lot of credit. It was a hard-fought match on both sides. Shiori [Fukuda] has worked so hard over the years and to see her come up with the win, under those circumstances, was amazing to watch.”

No. 11 Fukuda was the star for the Buckeyes, as she secured the win with victories in the four games of the third set against No. 16 Lisa Marie Rioux.

The 2-0 Buckeyes will take the court next against Duke on Jan. 31