Men’s Hockey: No. 6 Buckeyes Swept In Minnesota, Fall From First 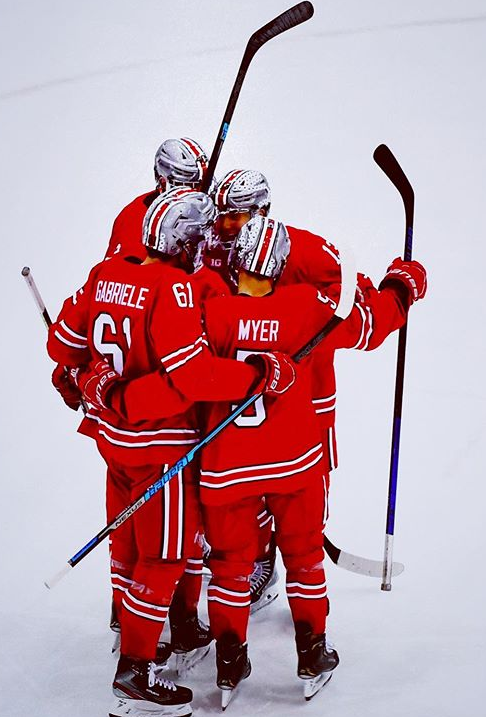 Ohio State took two steps back, literally, with a lost weekend at Minnesota, dropping 6-3 and 4-1 decisions to the Golden Gophers on Friday and Saturday to fall from first to third in the Big Ten.

The No. 6 Buckeyes, who will certainly fall from the top 10 rankings, are 15-8-3 overall and have 26 points (8-6-2-0) in the conference, two points behind Michigan State and Penn State with eight regular season games remaining.

“Obviously being from there and playing a lot of hockey games right there and you’ve grown up a few miles from where we’re playing is always nice,” Rohlik said. “But to me at the end of the day it’s about this team and I view it as business trip.”

The series had special meaning for Marooney, whose brother Joey is a senior forward for the Gophers. James did not dress when the teams played in Columbus in December but was in the lineup both nights in Minneapolis and got his first career point, an assist on a Carson Meyer goal, in the first game.

“It’s really fun to play against him,” James said of his brother prior to the game. “We grew up playing against each other in the backyard and on the street. So, it will be fun to have an official match.”

The Gophers (9-10-4, 4-5-4-3) took four of six points from the Buckeyes in the first series this season and continued their domination  in the opener before 7,489 at 3M Arena at Mariucci.

OSU junior goalie Tommy Nappier returned from missing two games vs. Notre Dame the previous weekend because of an injury to make 22 saves but the Buckeyes couldn’t hold a 2-1 lead in the second period and the Gophers scored four straight times.

Quinn Preston gave the Buckeyes a 1-0 lead at 11:06 of the first and freshman Tate Singleton made it 2-1 at 6:39 of the second before Minnesota scored twice before the end of the period and upped the lead to 5-2 late in the third.

“We started off and played our game and took care of the puck,” Rohlik said. “When you start turning pucks over it plays into their transition and gives them opportunities. It just wasn’t good enough tonight. Give Minnesota credit.”

Meyer had the lone OSU goal in the second game to  make it 3-1 at 6:30 of the third period and Nappier made 34 saves.

“They were a better team tonight. We just didn’t play great,” Rohlik said. “I liked our fire in the third. We showed we weren’t just going to wilt away, but you have to learn from this.”