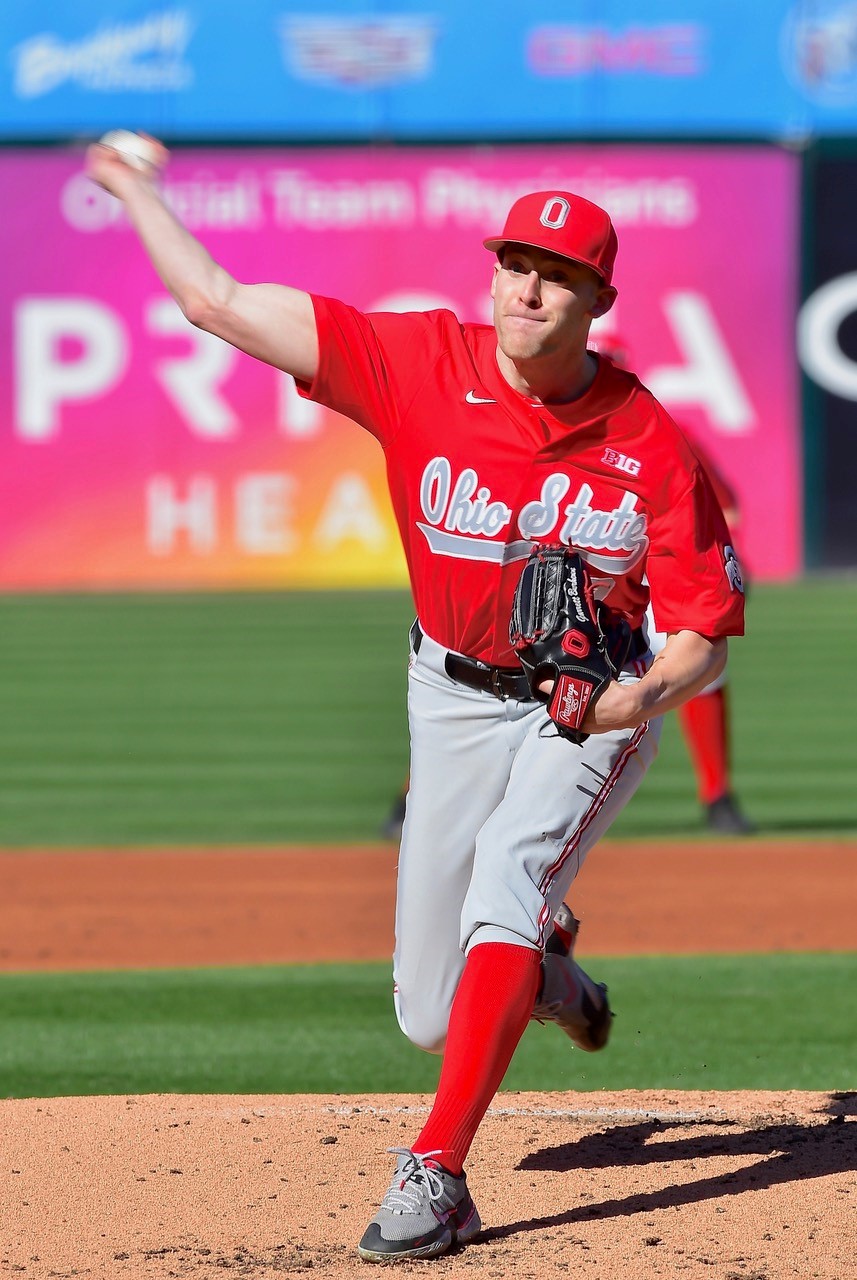 The Ohio State women’s hockey team fell to Wisconsin in the WCHA final in overtime, 3-2. Wisconsin’s Lacey Eden managed to break the stalemate just 42 seconds into that extra frame.

“We battled. There were no excuses, it’s playoff hockey,” said head coach Nadine Muzerall. “You sell out and do everything you can and need to do. We did that. We had an opportunity to get the puck out twice – it bounced over a stick and then hit off a skate badly that kept it in. It’s unfortunate but Wisconsin capitalized on that.”

For more on the women’s hockey team, check out this story on their qualification for an at-large bid as the No. 3 seed in the NCAA Tournament.

Ohio State won its first series of the season despite an 8-0 loss in the series finale, toppling Illinois 3-1. The Buckeyes took the first three games of the series behind pitchers Garrett Burhenn, Seth Lonsway and Jack Neely respectively, winning game one 6-3 in 13 innings, game two 6-5 in nine innings and game three 12-6.

The star of the weekend was freshman outfielder Kade Kern, who batted .444 in his collegiate debut, including a 5-of-6 day in game one that featured three singles, a double and a triple.

“We showed some perseverance and some resiliency this weekend,” Ohio State coach Greg Beals said. “We got in some tough spots this weekend. Today, we weren’t able to get things done, but the first three games of this series we did.”

“We showed this weekend that we are capable of playing at a high level,” junior Zach Dezenzo said. “We got contributions from a lot of guys all over the field. We also learned we’re resilient. We overcame adversity and responded in those situations and ultimately came out with a series win.”

Brian Maisonneuve’s program is red hot. The Buckeyes improved to 3-1 after a pair of Big Ten wins over the past week, claiming their second clean sheet of the year against Michigan State on March 3, 2-0, and following that up on March 7 with a furious comeback to topple Northwestern, 4-2.

It was a momentous weekend for a pair of freshman as well, as English freshman Laurence Wootton notched his first goal against Michigan State before freshman Parker Grinstead put two in the back of the net against the Wildcats.

While not a milestone in the traditional sense, Sean Ryan scored what was almost certainly his first career sliding goal against Northwestern as well.

Jen Flynn Oldenburg may not lose as the Ohio State women’s volleyball head coach. Under the first-year shot caller, the Buckeyes now sit at 12-0 after upsetting No. 10 Penn State for the second time this season on March 3, this time in straight sets (25-18, 25-20, 25-23).

This was also the first time Ohio State has won in Penn State’s Rec Hall since Oct. 20, 2004. The Buckeyes were set to square off with Minnesota over the weekend, but had the series postponed.

“Ohio State’s two matches against Minnesota, scheduled for March 5-6 in Columbus, have been postponed,” a school statement reads. “Both teams mutually agreed to the postponement out of an abundance of caution due to COVID issues within the Minnesota program. The institutions will work with the Big Ten Conference to identify rescheduling options.”

Ohio State claimed its seventh straight win and third straight shutout to improve to 8-1 on the season with a 7-0 drubbing of Indiana on March 7. The Buckeyes have won 66 straight Big Ten matches. John McNally/Robert Cash and Cannon Kingsley/JJ Tracy grabbed the doubles point for the Buckeyes, while McNally, Cash, Kingsley, Tracy and Kyle Seelig took the singles victories.

Ohio State improved to 10-3 on the season with a 5-2 road victory over Iowa on March 7, its second 5-2 road victory of the week after a successful trip to Lincoln, Ne., and a win over the Cornhuskers on March 5. Ohio State has won the doubles point in eight consecutive matches now, and saw dominant singles performances from Irina Cantos Siemers, Luna Dormet, Lisa Hofbauer and Lucia Marzal.

Ohio State dropped another ranked bout, this time against No. 14 Penn State on March 6, 15-13.

“We need to be cleaner,” said head coach Nick Myers. “We just have to execute better in all phases of the game. Credit goes to Penn State for making more plays than we did today. I am proud of the fight our men showed and the resolve to claw back in it after a couple of their runs. We had our chances.”

Ohio State was led offensively by Tre Leclaire and Jack Myers, who each scored three times, but couldn’t keep up with a high-powered Penn State offense that generated 43 shots.

Game one was big for the Buckeyes freshmen, with Peyton McNamara and Kine Florte finding the back of the net, twice in McNamara’s case, to lift their team.

“It was a solid team effort today,” head coach Lori Walker-Hock said. “The depth of our bench was extremely helpful. Our young players are really growing into the pace of the Big Ten.”

Game two saw another Florte goal, but Rutgers found the game winner in the 54th minute, earning the edge in shots (13 to 8) and shots on goal (5 to 4).

The Buckeyes dropped a pair of Big Ten matchups, falling 2-0 to No. 9 Maryland on March 5 despite a 10-6 edge in shots and 1-0 to Rutgers on March 7. Ohio State managed seven shots on goal in game two but couldn’t sneak one past Gianna Glatz. The Buckeyes will need to find some scoring soon, with just one goal through three games and a two game series with Iowa on deck.

Ohio State lost two heartbreakers to Johns Hopkins in three days. The first came on March 5, with Johns Hopkins taking a 12-11 victory despite a four-goal effort from Kelsey Reed and a hat trick from Lindsey Epstein. JHU took the 12-11 lead with 13:18 to play and Ohio State’s offense dried up, unable to equalize.

In game two on March 7, the Buckeyes again came up one goal short falling 10-9, but did so after surrendering a 6-1 lead following a six-goal stretch that featured four Liza Hernandez goals and another two from Nicole Ferrara.

“It was great being back home in Covelli after spending so much time on the road,” said head coach Meredith Paulicivic. “It was a competitive meet with awesome energy. We had some strong performances but there’s still some fine-tuning that we need to do in the gym.”

“The senior night recognition was amazing, definitely the highlight of the meet,” said Paulicivic. “Our seniors did great and finished their last routines in Covelli on a high note. They’ve given us four amazing years so it was good to celebrate them and have their families here.”