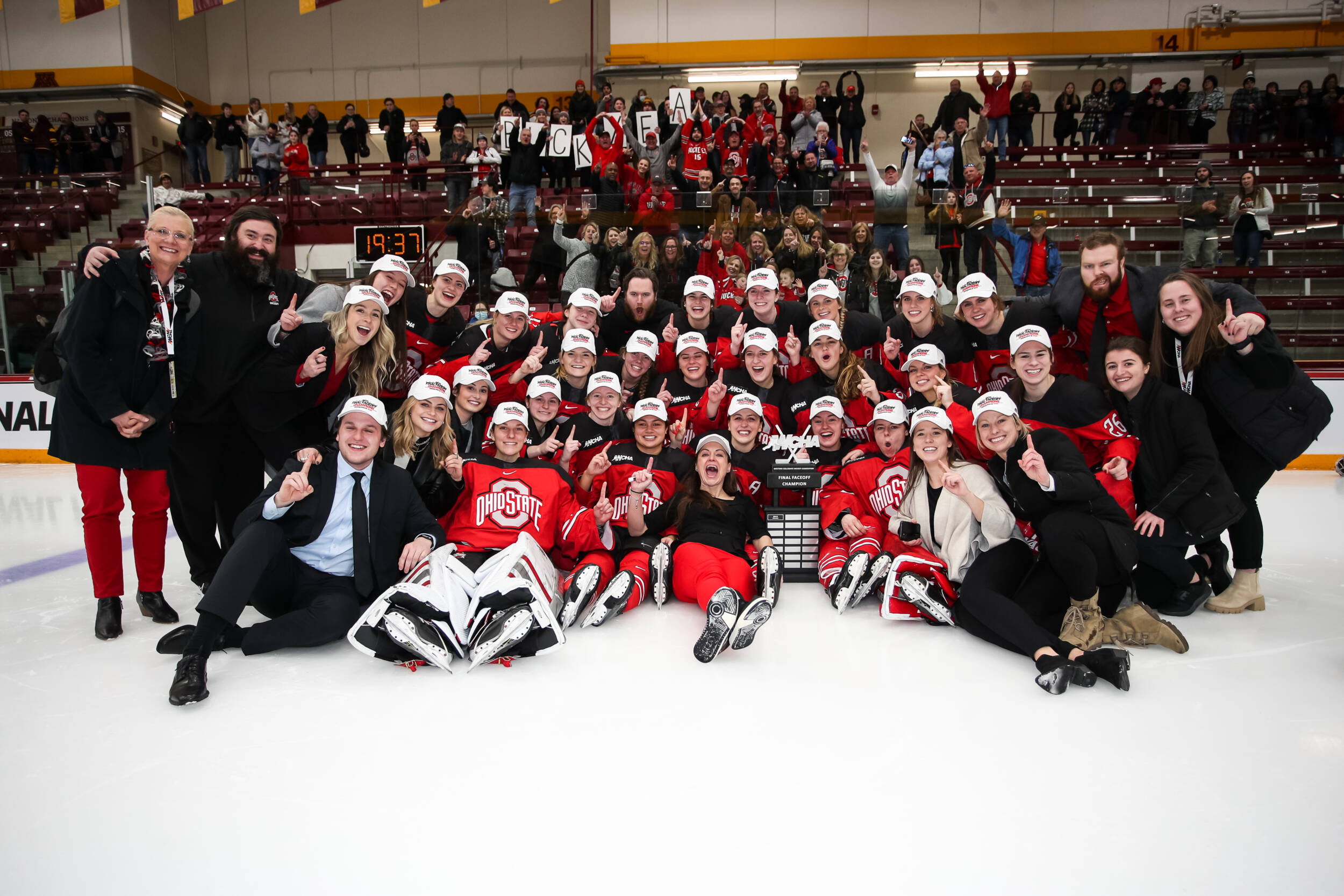 Head coach Nadine Muzerall said her team showed toughness and grit to overcome their in-conference rival, recognizing Minnesota’s challenge, especially when it held a three-goal lead over the Buckeyes.

“It kind of feels like a national championship—you have number one and two in the country, and honestly, at this time of the year, it’s anybody’s game. I thought it was a back-and-forth game all the way through,” Muzerall said. “I just really commend us for coming back from being down two to nothing against the number one team in the country and fighting and finding a way to do it.”

WCHA Defender of the Year Sophie Jacques provided the Buckeyes with the game-winning goal in overtime. She took a shot on Minnesota goaltender Lauren Bench that the Gopher initially saved. However, Jacques collected her rebound and buried the second attempt in the top left corner of the net after 23 seconds in the extra period.

Jacques’ goal allowed Ohio State to hoist a trophy, but that wouldn’t have been possible without the contributions of Sara Saekinen, Lauren Bernard, Gabby Rosenthal and Clair DeGeorge. The Buckeyes fought back from a late two-goal deficit to bring the game to overtime. After a scoreless first period, Minnesota scored twice in the second to take a 2-0 lead with 20 minutes left in regulation.

“We were doing some uncharacteristic things,” Muzerall said. “We didn’t play bad, but we didn’t play elite. You’re playing the No. 1 team in the country and you want to win. You’ve got to play better and you’ve got to hold yourselves to a higher standard.”

Saekkinen put Ohio State on the board at 3:34 into the final frame. Bernard and Rosenthal assisted the goal, with Bernard sending the final pass in front of Bench. Saekkinen capitalized to cut the Minnesota lead in half. Jacques scored her first goal at 10:26 when she slid into the slot and one-timed a DeGeorge pass into the net, which tied the game at two-all.

Ohio State goaltender Amanda Thiele stopped 31 Minnesota shots. She was named to the All-Tournament team with Jacques, Saekkinen and Liz Schepers. Jacques also won the Final Faceoff’s Most Valuable Player award, becoming only the second Buckeye to win the award in program history. Her two goals put Jacques at 57 for the season and 105 for her career. The defenseman has now scored the third-most points in the country this season and is averaging the third-most points per game (1.6286) nationally.

With the win, the Buckeyes earned the No. 1 overall seed at the 2022 NCAA Tournament and will host the first and second rounds in Columbus. Ohio State will face either Quinnipiac (25-9-3) or Syracuse (15-10-6) on Saturday at the OSU Ice Rink.

“It says a lot about how far this program has come,” Schepers said. “And where we are headed, and what our goals are and the new standard of Ohio State hockey. I couldn’t be more proud.”

Three other WCHA teams made the 11-team field, including Minnesota, Minnesota-Duluth and Wisconsin. Minnesota will face wither Minnesota-Duluth or Harvard in the first round and Wisconsin will host Clarkson. The tournament begins March 10 at campus sites, with the Final Faceoff held March 18-20 at Pegula Ice Arena at Penn State.