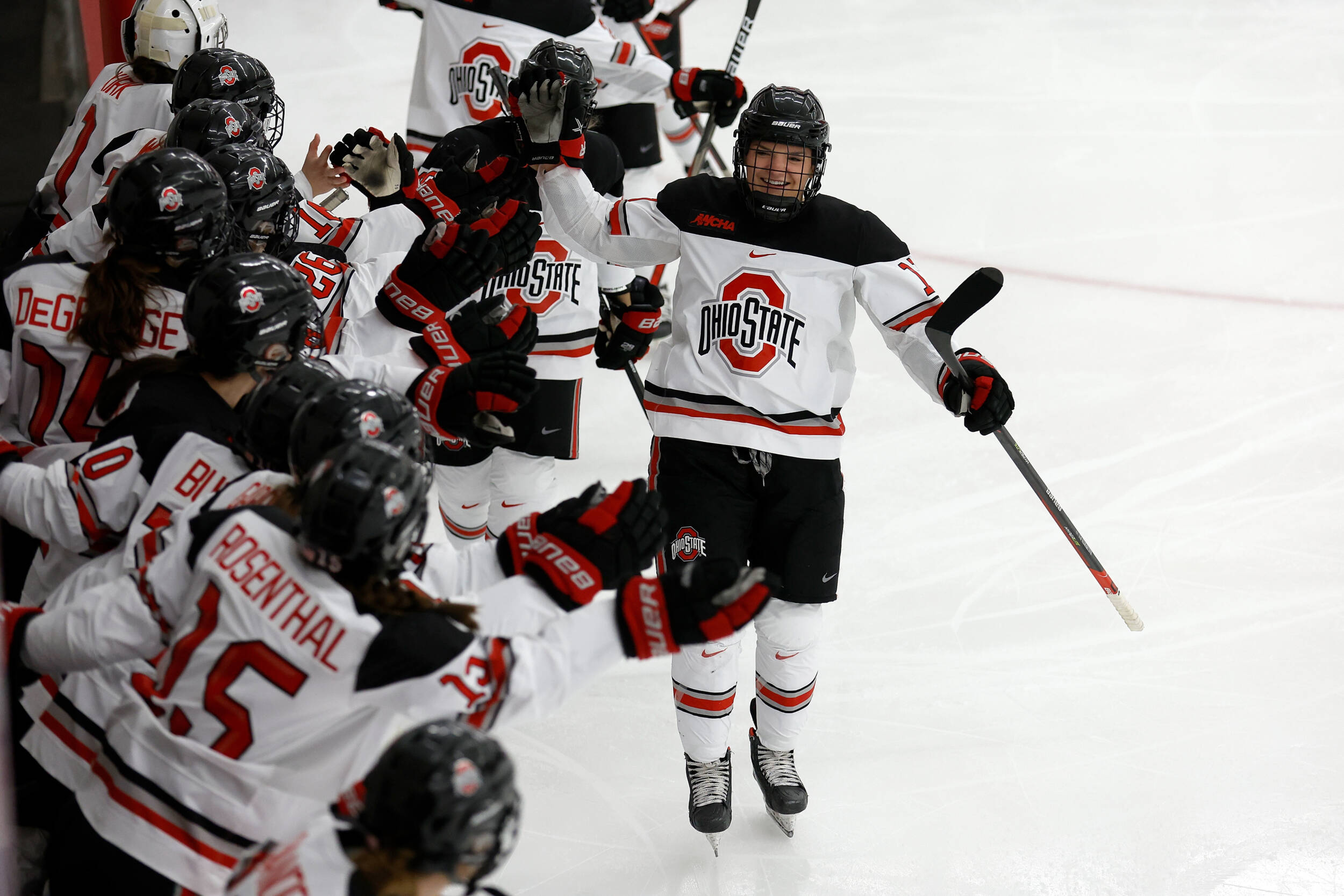 Ohio State women’s hockey closed its 2021-22 season with a 2-1 win over Wisconsin for its program-record 25th regular-season victory. The Buckeyes earned a series sweep against the Badgers for the third time in program history and the second time during the regular season.

Junior Kenzie Hauswirth put the Buckeyes on the board first in both games. In Game 2, she put her team on the board at 1:32 in the second period. The Farmington, Minn. native picked up Sara Saekkinen’s pass before the Badger goal and pushed the puck past Wisconsin’s Cami Kronish to give Ohio State a 1-0 lead.

Hauswirth continued her weekend scoring after that goal, recording the Buckeyes’ second netted attempt and the game-winner at 7:59 in the second frame. Ohio State sent a flurry of shots on the Wisconsin cage and Hauswirth was back in front of the goal to capitalize off a rebounded shot from Jenna Buglioni.

Wisconsin scored at 17:36 in the second. Still, head coach Nadine Muzerall’s squad held off a Badger comeback to secure the 2-1 win. Goaltender Amanda Thiele had another stellar performance in goal, earning 22 saves and improving to 11-3-0 this season.

After the weekend ended, Hauswirth and senior defenseman Sophie Jaques took two of the conference’s final weekly awards of the regular season. Hauswirth was named the WCHA Forward of the Week award, and Jaques collected her second consecutive WCHA Defender of the Week honor.

Jaques earned her eighth WCHA award after helping her team hold the Badgers (4.16 goals per game average) to two goals in the series. She also recorded her 10th power-play goal in Game 1 against Wisconsin to reclaim her spot as the nation’s best power-play scorer.

The Buckeyes’ postseason begins with a best-of-three WCHA quarterfinal matchup with St. Cloud State. Puck drops at the OSU Ice Rink Friday at 6 p.m., Saturday at 3 p.m. and Sunday at 3 p.m. (if needed).

The Big Ten named Ohio State senior Jesse Tyndall was named Big Ten Gymnast of the Week following his performance in the tri-meet against Army and William & Mary on Saturday. It was the second-consecutive week Tyndall earned the honor.

Tyndall put together another impressive meet as Ohio State won the tri-meet over the Black Knights and the Tribe. He stuck all three of his dismounts, winning rings (14.100) and high bar (13.750). Tyndall took third on the parallel bars (13.500). He ranks second in the nation on high bar, sixth on rings and 15th on parallel bars and holds the highest score on the high bar of any gymnast this season.

Ohio State, which entered the ITA National Indoor Championship field as the top overall seed, isn’t headed to a finals matchup with either second-seeded Baylor or third-seeded Tennessee after it came up short in a 4-3 semifinal matchup against No. 5 TCU, decided in the final singles match of the afternoon.

It was Jake Van Emburgh, a graduate transfer from Oklahoma who arrived at Ohio State to play out his final year of eligibility this season, who nearly lifted the Buckeyes over the Horned Frogs against TCU’s Sander Jong in the final match of the day. Still, he saw a comeback effort dashed in the last set, with Jong taking the match 6-4, 6-7, 6-0. In the second set, Van Emburgh staved off defeat with a 7-3 victory in tiebreakers after the two battled to a 6-6 stalemate. In the final set, though, Van Emburgh was broken on both of his first two service games as Jong raced out to a 4-0 lead that he would not falter on, claiming every game in the set.

TCU earned the doubles point to open the meet and paired it with singles points from No. 44 Luc Fomba over No. 6 Matej Vocel (6-4, 6-4) and No. 69 Lui Maxted over Robert Cash (7-5, 6-2). For the Buckeyes, a defeat in doubles (where it holds the top two teams in the ITA rankings, both of which lost) and struggles for Vocel can often spell disaster, even with other members of the singles bunch faring very nicely.

TCU will match up with the winner of the other semifinal. Historically, the event has not featured a third-place matchup and does not list one on its schedule, though such a matchup was played in 2021. Ohio State is now 11-1 on the season, claiming victories over No. 8 Wake Forest 4-0 in the quarterfinals and No. 16 Washington 4-1 in the opening round.

Several Buckeye swimmers broke school records in the competition, including Hannah Bach in the 100-yard breaststroke (57.61) and Amy Fulmer in the 200-yard freestyle (1:43.73). While she didn’t watch her name in the record books, Kristen Romano defended her Big Ten title in the 200-yard individual medley at 1:54.43.

Ohio State’s first three games of the 2022 season involved an aggressive offensive approach and timely run production. However, the Buckeyes’ bats were outmatched against BYU in their fourth game, leaving with its first regular-season loss.

BYU took the lead on a two-out first-inning grand slam and didn’t look back, continuing to add runs in the following innings to beat Ohio State, 9-6, and handing graduate transfer Aaron Funk his first defeat. Funk only lasted one inning after allowing a double, single and a walk in consecutive at-bats to load the bases. He had a chance to escape the jam without significant damage, but Hayden Leatham’s four-run shot broke open the game for the Cougars.

Wyatt Loncar entered in relief, allowing four hits and two walks across his 3.2 innings. He struck out six batters and allowed four earned runs. Ohio State chipped away at the lead from a Zach Dezenzo three-run home run following singles from Brent Todys and Marcus Ernst. In Loncar’s final inning, he allowed a single and a walk with two outs before freshman Jake Johnson replaced him. Johnson pitched two scoreless innings in the comeback win on Sunday but gave up a three-run home run to the first batter he faced.

Junior Nate Karaffa put together a solid outing after he took the bump. He allowed only one hit across two scoreless innings. After a scoreless inning from sophomore Trent Jones, Ohio State looked poised to make a comeback for the second consecutive game. In the eighth inning, the Buckeyes scraped together three runs, aided by two BYU errors and a wild pitch.

Ohio State entered the final inning down 9-6. Colton Bauer hit a double and Ernst walked, bringing the Buckeyes’ tying run to the plate. However, Denzenzo struck out looking and Kade Kern went down singing, which ended the game and gave head coach Greg Beals and his squad their first loss.

The Buckeyes will travel to San Marcos, Texas, for a three-game series with Texas State that begins on Friday at 7:00 p.m., then games on Saturday and Sunday.