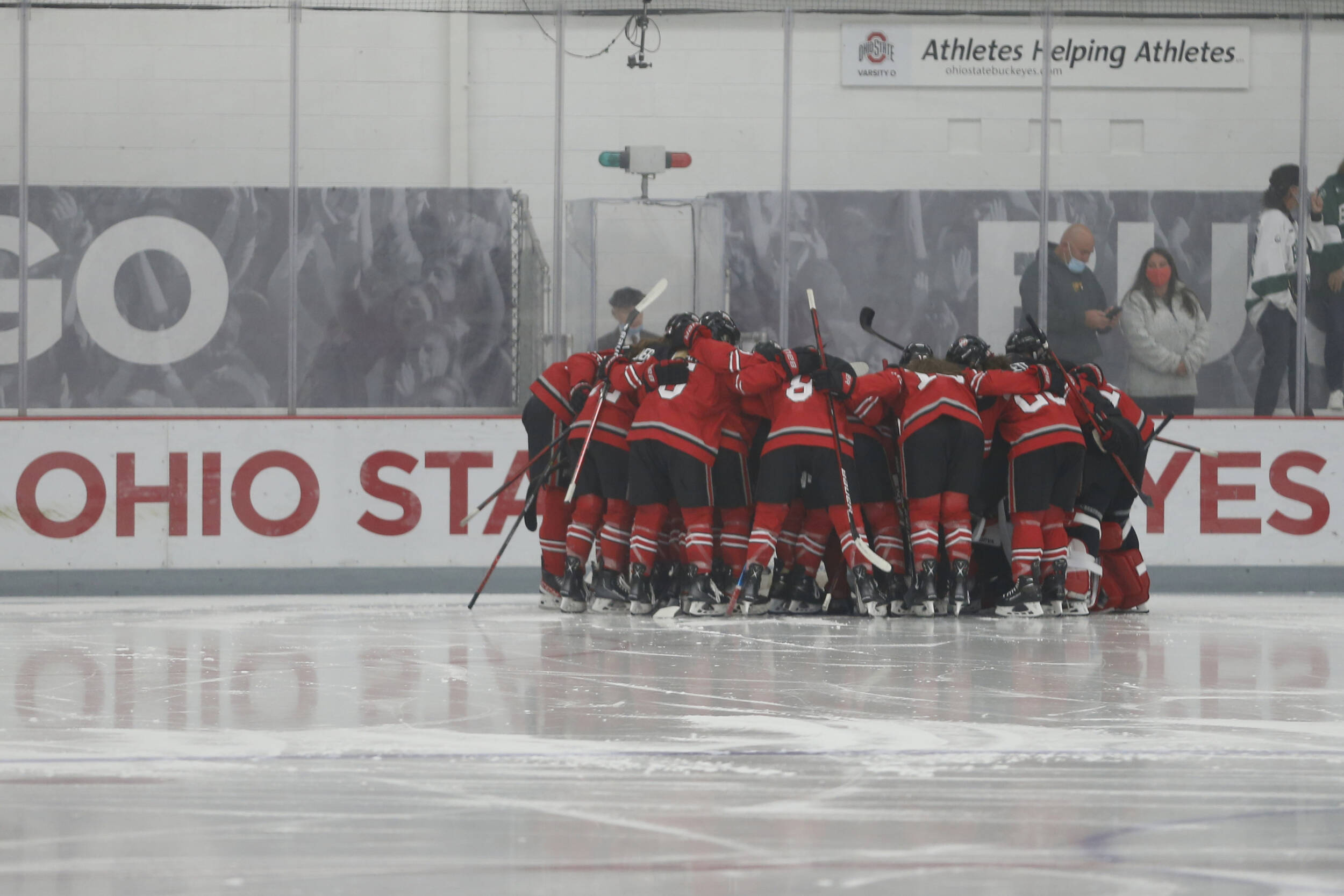 Ohio State women’s ice hockey lost two hard-fought games to Wisconsin over the weekend. The No. 2 Buckeyes (6-2) fell to the No. 1 Badgers, 3-1, Saturday afternoon in LaBahn Arena in Madison before dropping a 2-1 overtime game on Sunday.

In the first game, Gabby Rosenthal scored the lone goal after Jenna Buglioni found her waiting at the left faceoff circle in the first period. The Badgers then scored three unanswered for the win, with Grace Bowlby, Casey O’Brien and Daryl Watts sealing the win. Ohio State was outshot, 37-28, and Andrea Braendli made 34 saves.

The Buckeyes improved on Sunday but ultimately fell short in defeating the Badgers. Wisconsin took the lead with a goal in the game’s opening period. Gabby Rosenthal found the back of the net again, scoring her seventh goal of the season and extending her multi-game point streak. After three periods, the team’s ended in a 1-1 tie.

Wisconsin’s Nicole LaMantia scored in 3-on-3 overtime, breaking the tie and ending the game. With the goal, the Badgers continue their winning streak to start the season, improving to 10-0. The Buckeyes fell to 6-2.

Ohio State will look to bounce back against St. Cloud State in Columbus next weekend with games on Oct. 29 at 6 p.m. and Oct. 30 at 2 p.m.

Ohio State field hockey also dropped two games over the weekend. The No. 21 Buckeyes (7-9) fell to Penn State on Friday before falling to Rutgers in their home finale on Sunday afternoon.

Against the Nittany Lions, the nation’s seventh-ranked team, Ohio State went scoreless. Both teams went without a goal in the first quarter, but Penn State opened the flood gates in the second quarter from Sophia Gladieux, who scored her team-leading 15th goal of the season.

After taking a 1-0 at halftime, Gladieux added another goal in the fourth quarter. The Nittany Lions would add two more scores before the buzzer, including one with four seconds left to play, capping the scoring at 4-0.

However, the Ohio State seniors couldn’t leave Buckeye Field with a win. The Buckeyes dropped a hard-fought 3-1 decision to No. 3 Rutgers, dropping to 7-9 (1-6 Big Ten) this season.

Rutgers broke a 1-1 halftime tie with a goal in the third quarter and added another midway through the fourth to earn the win. Ohio State’s goal came from Sarah Charley, who answered an early goal by Rutgers just five minutes into the first quarter. Charley, a Worthington, Ohio, native, redirected a cross from the end line off the stick of Hallie Brost.

The Buckeyes have two more games this season, with trips to Maryland and St. Joseph’s coming this week.

The Buckeyes (5-8-1, 1-5-0) scored a pair of first-half goals and held onto their lead against the visiting Nittany Lions. Laurence Wootton and Devyn Etling scored on set pieces within the first 45 minutes of play while Penn State’s Andrew Privett found the back of the net in the 67th minute. Ohio State goalkeeper Noah Lawrence stopped six of Penn State’s 14 shots.

Ohio State will host Michigan on Tuesday with the first touch set for 6 p.m.

Ohio State women’s soccer beat Northwestern 2-1 on a rainy, bitter day in Chicago. The win secured a 9-7-2 record and helped them to the No. 7 seed in the Big Ten Tournament.

Kayla Fischer and Sydney Jones netted two goals for the Buckeyes, giving the team a 2-0 lead with under 20 minutes remaining in the game. Northwestern caused some panic late and pushed in a home goal with under two minutes to play.

The rainy conditions made mounting an offensive attack difficult as both teams managed just three shots in the game.

Ohio State gets a matchup with Purdue in the first round of the conference tournament. The two teams met earlier this season on Oct. 14, with the Boilermakers leaving Columbus with a 1-0 overtime win. The Buckeyes have won three Big Ten Tournament titles under head coach Lori Walker-Hock — the most recent coming in 2012.