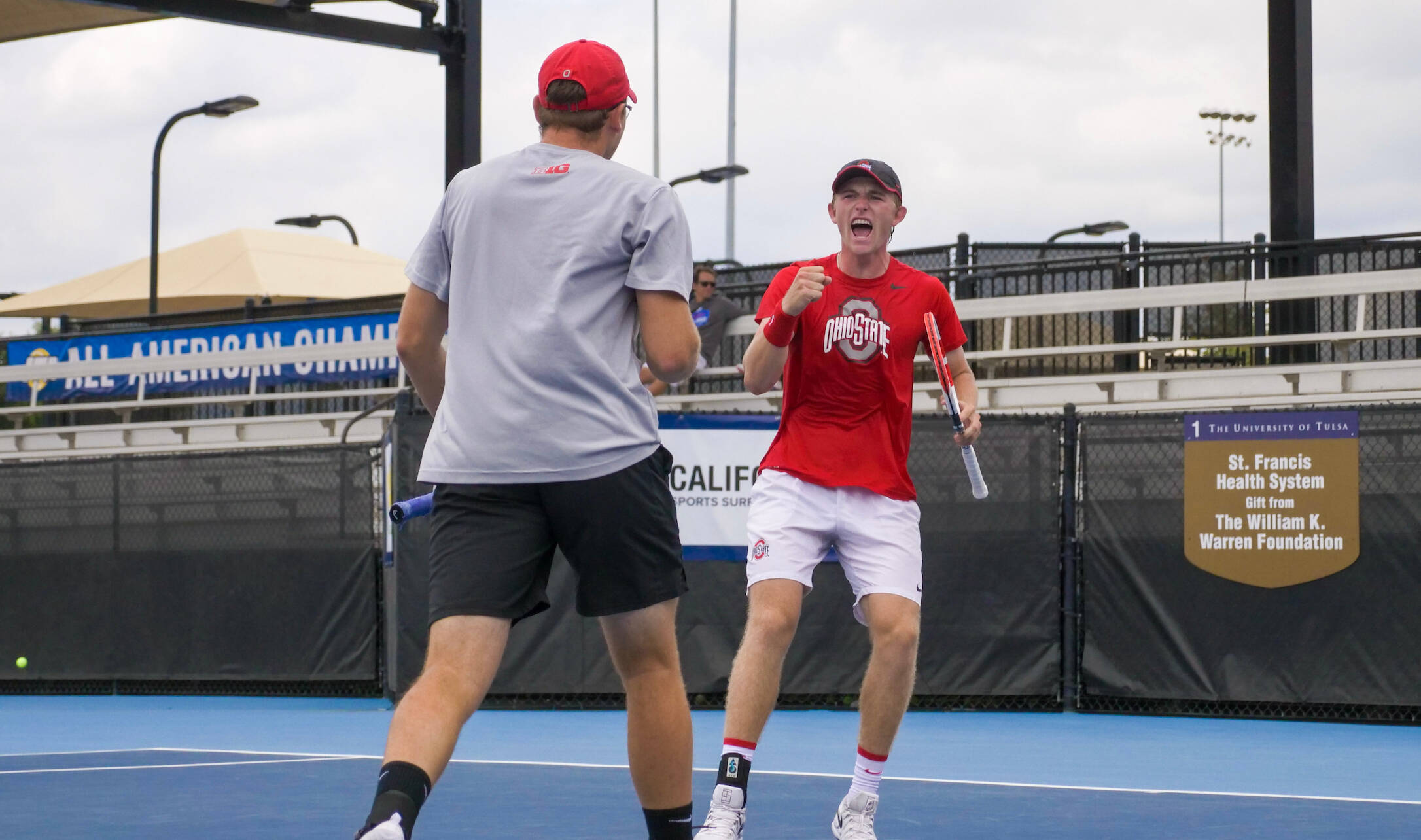 The Ohio State men’s tennis team capped its fall season on Sunday with a doubles national title as Matej Vocel and Robert Cash claimed a three-set victory over Stanford’s team of Arthur Fery and Alexandre Rotsaert.

The victory put a bow on an undefeated fall for Vocel and Cash, who also won the ITA All-American Championship doubles title in September. The duo was 14-0 with six wins over ranked opponents. They become the third Buckeye doubles team to win an ITA Fall National Championship, joining Chace Buchanan and Blaz Rola in 2011 and Scott Green and Ross Wilson, who won back-to-back titles in 2004 and 2005.

James Trotter and Justin Boulais also had a good run in the consolation bracket. After losing their opening round match, they won three consecutive matches to reach Sunday’s final. They met No. 11 Benjamin Hannestad and Franco Aubone of Miami (OH), who beat them 6-4, 3-6, 10-7.

The Buckeyes had three players in the singles draw, which was the most of any school in the tournament.

Vocel won his first three matches to reach the semifinals before falling to Arthur Fery in three sets (5-7, 6-4, 5-7). He played nine matches over the four days of the event, including three matches on Saturday. Vocel finished his fall season 10-3 in singles and 14-2 in doubles.

JJ Tracy advanced to the quarterfinals of the singles draw with a 4-6, 7-5, 6-1 win over No. 18 ranked Juan Carlos Aguilar of TCU. He also claimed a 6-0, 6-1 victory over Arkansas’s’ Aleksa Bucan. He then lost to Clement Chidekh of Washington in the quarterfinals.

Tracy had a record of 15-4 this fall and reached the quarterfinals of the ITA All-American Championship and the ITA Fall Nationals while also getting a podium spot at the ITA Midwest Regionals.

Trotter played a pair of singles matches this weekend, falling in the opening round of the main draw and the consolation bracket.

The No. 7 Buckeyes defeated the Cornhuskers (27-25, 25-21, 25-23), following suit after the football team beat Nebraska earlier on Saturday afternoon. Ohio State improved to 19-5 (9-5 Big Ten) in the team’s second sweep of a top 10 opponent in head coach Jen Flynn Oldenburg’s tenure.

Kylie Murr reached double-figure digs for the fifth-straight match and the 21st time this year, finishing with a match-high 16 digs. She is now tied for eighth all-time in career digs at Ohio State with 1,281. Arica Davis ended the game with six blocks, totaling the sixth time this season she’s recorded at least six blocks in a match.

Ohio State is on the road next weekend for two matches. The Buckeyes first travel to Northwestern for a 2 p.m. ET match on Saturday before facing No. 25 Illinois on Sunday.

Ohio State women’s ice hockey isn’t great at welcoming St. Thomas to the WCHA. They don’t need to be — nor should they.

The No. 2 Buckeyes swept the Tommies over the weekend with a 6-2 victory at the St. Thomas Ice Arena on Saturday afternoon. As a result, the Buckeyes (10-2-0) finished the regular-season series against the Tommies (4-7-1, 2-7-1 WCHA) undefeated.

Sara Saekkinen recorded her first goal of the season and eighth of her career in the game. She’s skated in 94 games for Ohio State, claiming 27 career points. Sophie Jaques recorded six points over the weekend, giving her 68 for her career. On Monday, the WCHA named Jaques the conference’s Defender of the Week for her efforts.

Liz Schepers scored two goals on Saturday, pushing her within three points of 100 in her Ohio State career — one that started as a walk-on.

Mackenzie Hauswirth, Schepers and Saekkinen each scored a point in the last three contests. Gabby Rosenthal has scored in all but one game for the Buckeyes, and Jenna Bulgioni leads the team with a point in every game this season.