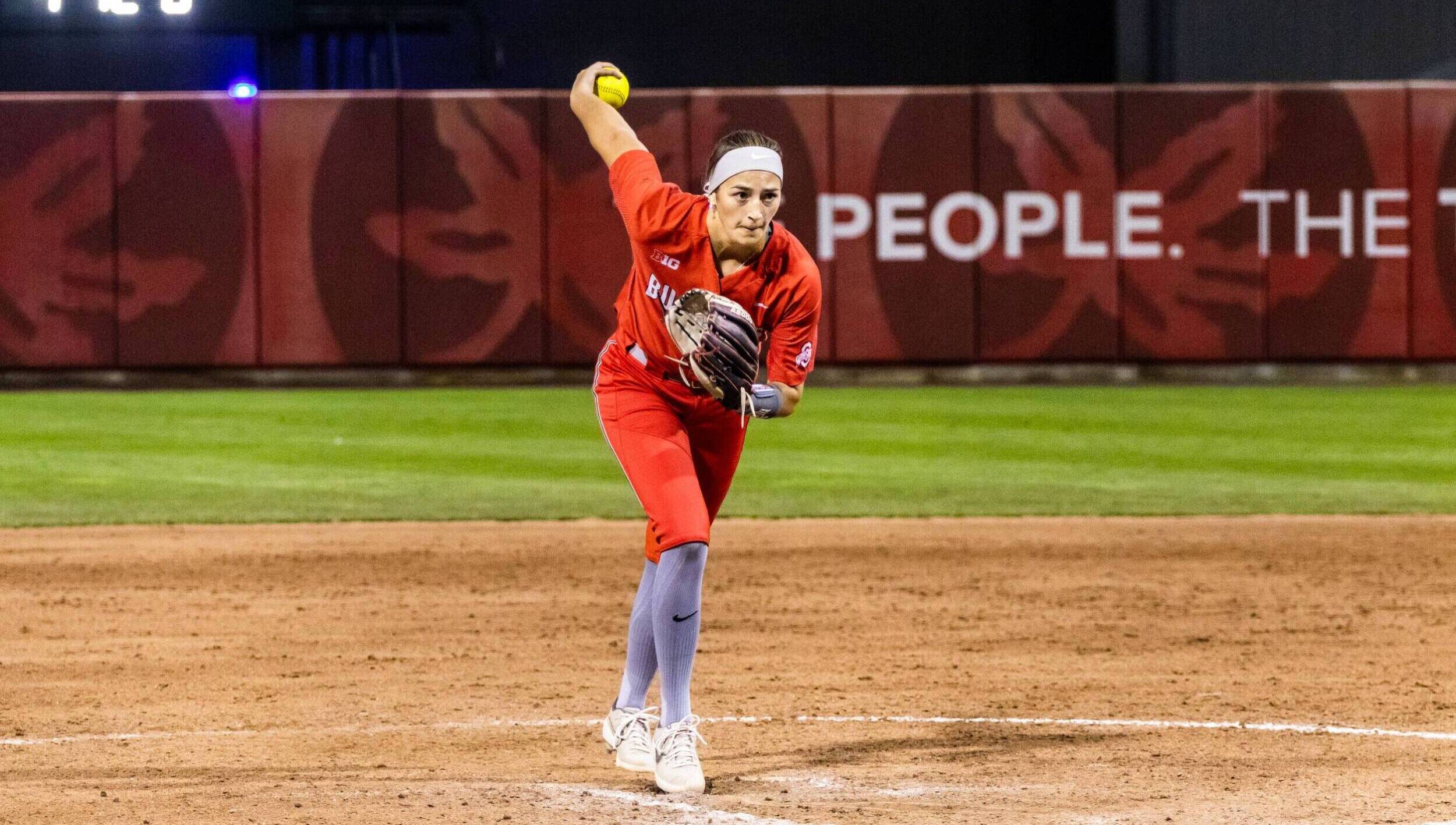 The Westerville, Ohio, native struck out 11 batters in an 8-0 win over the Minutemen, establishing a new career-high and in strikeouts and improving to 3-0 this season. Ruck’s performance locked down UMass while the Buckeyes’ offense surged with 10 hits, including extra-base power from Kami Kortokrax, Sam Hackenbracht and Niki Carver.

Kortokrax hit a double, while Hackenbracht and Carver smacked home runs to give Ohio State a 6-0 advantage. Jaycee Ruberti also drove in a run with a single — the 100th hit of her career. Eight of the Buckeyes’ nine starters recorded hits. Hackenbracht led with three RBIs and Tegan Cortelletti scored twice and stole a base.

Ohio State starting pitcher Lexie Handley improved to 6-2 with her most dominant outing of the season, recording 13 strikeouts with one hit and one walk in a 5-0 win over the University of South Florida.

Carver blasted her second home run of the day in the second inning, giving the Buckeyes an early 1-0 lead. Four innings later, Ohio State loaded the bases from a hit-by-pitch, bunt single and an error at first base. Pinch hitter Avery Clark delivered a sacrifice fly and an infield error allowed a second run to pass the home plate, making the score 3-0.

Cortelletti and Jaycee Ruberti put two insurance runs on the board in the seventh inning with RBI singles before Handley struck out the final two USF batters to close the game. With the win, the team improved to 13-3 and are off to their best start since producing a 14-2 record at the beginning of 2018.

Ohio State track and field wrapped competition at the 2022 NCAA Indoor Championships on Saturday in Birmingham, Ala. with several Buckeyes finishing near the top of their competitions.

2021 Ohio State Female Athlete of the Year Adelaide Aquila was the runner-up in the women’s shot put with a throw of 17.95m. Anavia Battle — a 2020 Olympian alongside Aquila — finished third with a 22.63-second run in the 200m. The sprint was her third-fastest mark of the indoor season.

Leo Uusimaki ended the men’s heptathlon with a 13th-place finish, totaling 5,752 points. He won the pole vault portion by clearing 5.16m, which was his second-best pole vault performance of the season. Uusimaki finished seventh in the 1000m (2:41.86) and ninth in the 60m hurdles (8.23). High jumper Amaya Ugarte tied her second-best leap of the season by clearing 1.78m to finish 13th overall.

The Buckeyes begin their outdoor season next weekend at the Arizona State Baldy Castillo Invitational on March 18 and 19.

Wallin won the Colleton River Collegiate after shooting 14-under par with rounds of 68, 69 and 65. The final round featured seven birdies and an eagle, which helped Wallin to his career-best finish at Ohio State. He ended the tournament with 17 birdies — the second-most in the field — and was second in the field in par-3 and par-4 scoring.

The Timmele, Sweden, native’s 14-under total is tied for the lowest 54-hole score in relation to par from a Buckeye in 42 years. Wallin has posted three top 10 finishes and five of his last seven rounds have ended in the 60s.

Ohio State played in two team events this season and had a medalist in each event. Maxwell Moldovan won the NEXUS Collegiate two weeks ago and earned Big Ten honors for his performance. The Buckeyes finished runner-up at NEXUS and fourth last weekend at Colleton River.

Ohio State fencing hosted the NCAA Fencing Midwest Regional at French Fieldhouse on Saturday. Its full roster of 12 men and women competed to advance to the championships set for March 24-27 at Notre Dame.