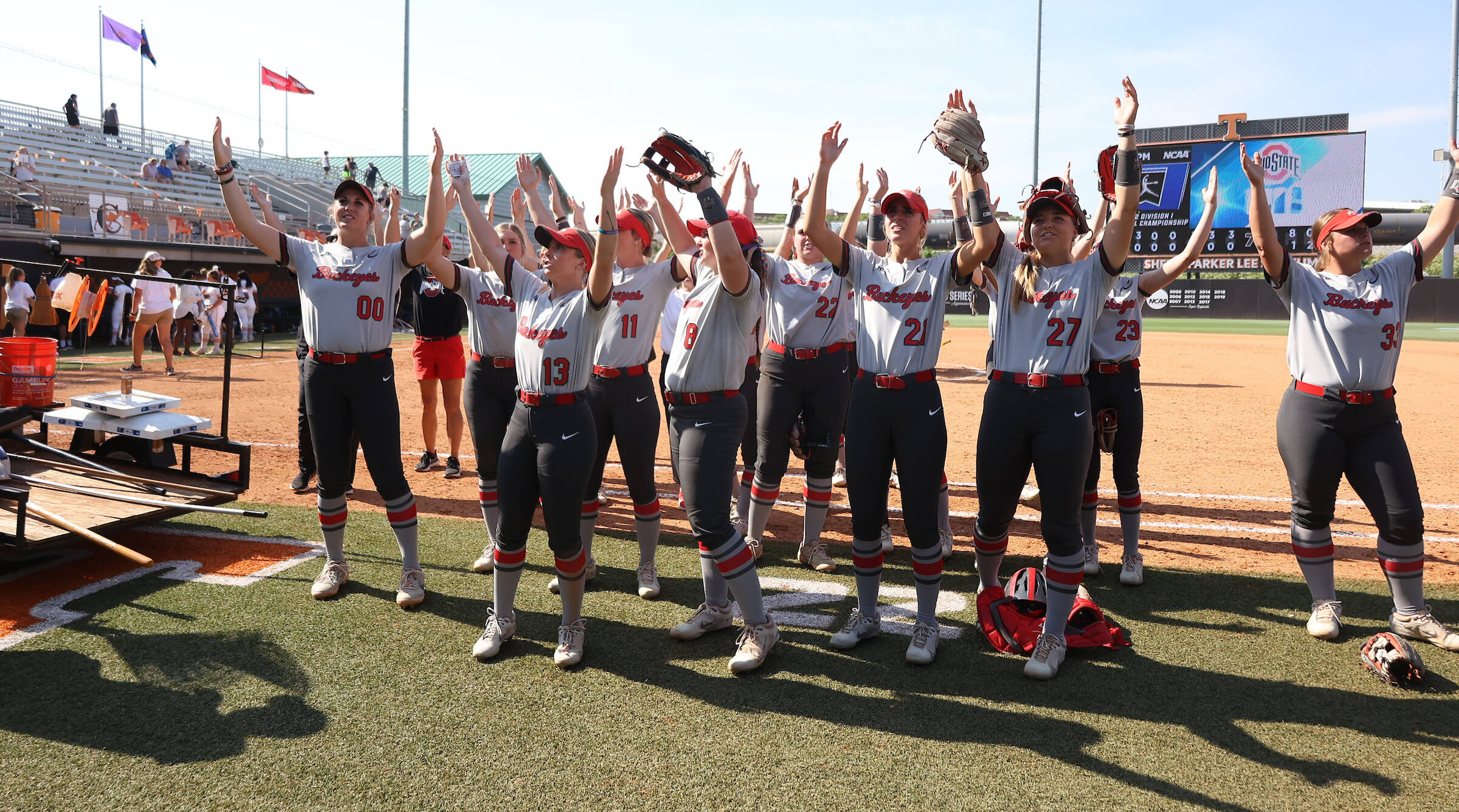 Ohio State softball’s magical season came to a close last weekend at the Knoxville Regional on the University of Tennessee campus.

The Buckeyes played back-to-back elimination games, beating Campbell 10-0 in six innings before falling to Oregon State, 5-1. Ohio State finished its 2022 campaign with a 36-17 record for the program’s best winning percentage (.679) in the last 12 seasons.

“I’m so thankful for this group of girls. Obviously, good things come to an end, but nobody tells you what happens to great things,” senior pitcher Lexie Handley said. “They’re a lot harder to deal with, especially because I only got one year with this group. I wish I had more time. I’m so thankful that I was loved and accepted for this time and felt like I could be myself again.”

In its first NCAA Tournament game, Ohio State lost to Oregon State 4-3, sending them to the double-elimination bracket to face Campbell. The Buckeyes showed no ill-effects from their first loss, jumping out to a 3-0 lead over the Camels. Sam Hackenbracht drove in Melina Wilkison with an RBI single and Niki Carver brought Hachenbracht home with a two-run shot. It was Carver’s 11th home run of the season.

Taylor Pack hit her third home run of the season in the top of the fourth — a solo shot over the right-field fence. Ohio State’s offensive onslaught continued in the fifth when Kaitlyn Coffman extended the lead with an RBI groundout and Taylor Heckman hit a two-RBI single. One inning later, Hackenbracht sent another ball over the fence, a three-run home run that made it 10-0 for the Buckeyes.

Allison Smith picked up her ninth win, striking out five over six innings while holding Campbell to one hit. Hackenbracht finished 2-for-2 with a home run and four RBIs. Those runs batted in brought her to 52 on the season, helping her become the 10th player in the program history to reach 50 RBIs in a season and the first since Lilli Piper in 2018.

With Ohio State’s decisive win over Campbell, the Buckeyes earned a rematch with Oregon State on Saturday, but the Beavers won 5-1 and ended their season.

Oregon State’s Mariah Mazon hit a two-run home run in the top of the first inning to push the Beavers in front 2-0. They extended their lead to 3-0 in the bottom of the second when Savanah Whatley hit an RBI double.

In the third inning, the Buckeyes showed life with a Wilkison double that scored Pack, who had reached on an error. The Beavers put two more runs on the board in the bottom of the fifth with a two-run home run to make it 5-1.

“Regardless of the outcome today, I think everyone can easily say that we choose this team and this group of girls,” senior pitcher Jessica Ross said. “We had unwavering belief through all our games that we were going to come through as a team.”

Ohio State ended its season with 36 wins, matching the most wins for the program since 2018. The Buckeyes finished with 13 or more conference wins for the sixth straight season, including eight victories on the road. They also defeated four ranked teams during the season: No 23 South Florida (twice), No. 22 Michigan and No. 8 Kentucky.

The Final X series will determine the 2022 U.S. Senior World Teams in all three Olympic disciplines, including men’s and women’s freestyle and Greco-Roman. The winner of each Final X Championship series will represent Team USA at the Senior World Championships in Belgrade, Serbia, Sept. 10-18.

Current Buckeyes Sammy Sasso, Dylan Koontz and Nick Boykin also competed at the Team World Trials. Jesse Mendez, who will be a freshman next season, along with former Ohio State wrestlers Fritz Schierl, Joey McKenna and Luke Pletcher were in action.

Junior Irena Cantos Siemers, senior Isabelle Boulais and freshman Sydni Ratliff are in the singles draw. Cantos Siemers was the Big Ten’s automatic qualifier and Boulais was an at-large selection. Ratliff moved into the draw after starting as the No. 4 alternate. The singles tournament is a 64-player draw and each match is single elimination.

Cantos Siemers and Ratliff will represent Ohio State in the doubles tournament after earning the Big Ten’s automatic berth. There are 32 teams in the doubles bracket and each match is single elimination. The Buckeye pairing will face North Carolina’s Elizabeth Scotty and Fiona Crawley in the first round.

Six Buckeyes will compete in the singles and doubles NCAA Championship this week. Cannon Kingsley and Matej Vocel are both top 16 seeds in the singles tournament after earning All-American honors. JJ Tracy and James Trotter will join them in the bracket.

In doubles, Vocel will join Robert Cash as the No. 2 seed after claiming All-American honors. They lead Ohio State with a 32-4 record this season. Trotter and Justin Boulais will also compete in the doubles draw.

After taking third place at the NCAA Columbus Regional, Ohio State men’s golf will compete in its 47th NCAA Championship this week at Grayhawk Golf Club in Scottsdale, Ariz.