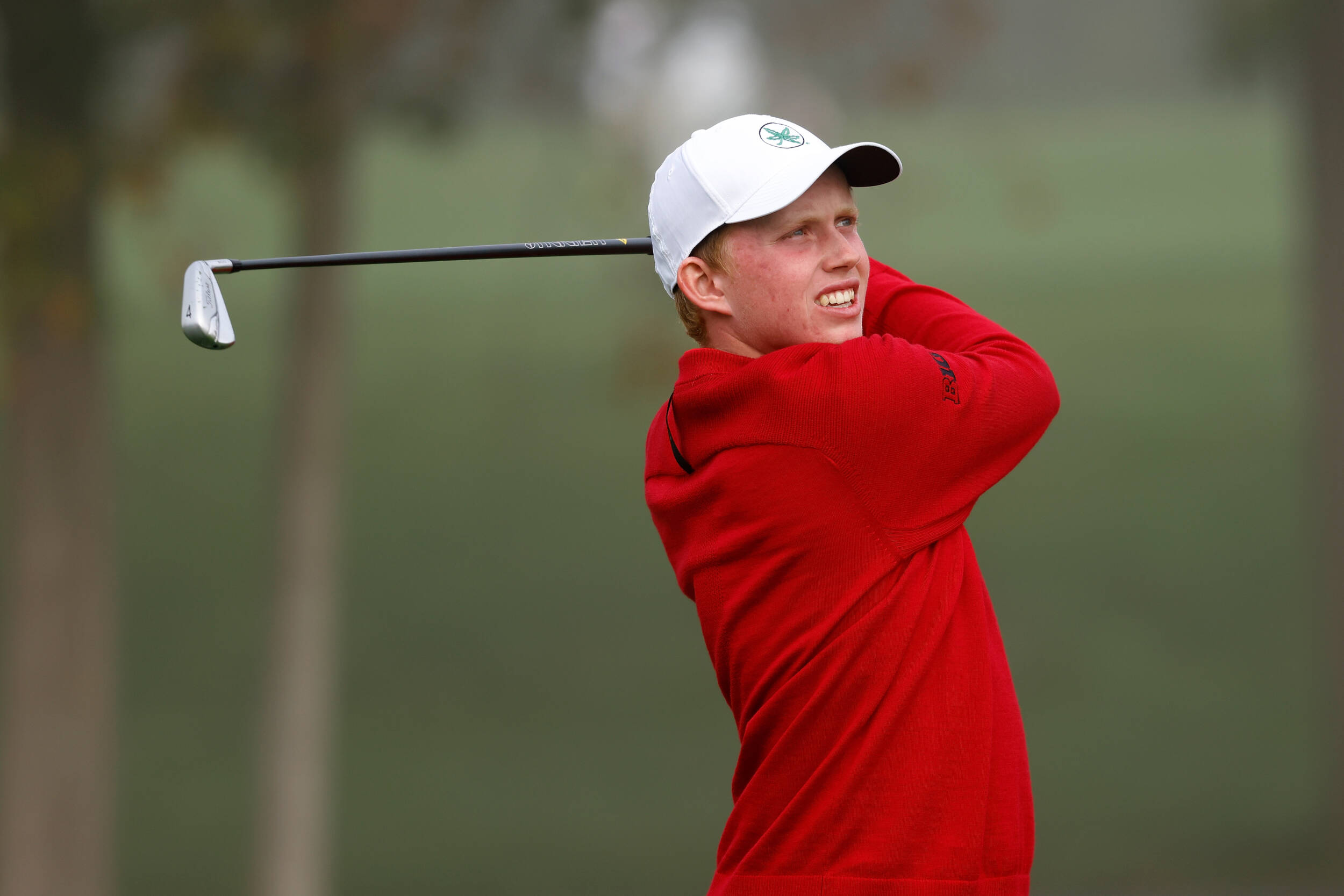 Ohio State golfer Maxwell Moldovan made the long drive to Boston with his dad and his caddy on Saturday. The All-American and All-Big Ten standout will make his major championship debut this week at the 122nd U.S. Open at The Country Club in Brookline, Mass. after qualifying in a tournament last week.

“I’m taking like 20 golf shirts with me,” Moldovan told the Canton Repository. “It’s hard for me to get together 12-15 outfits I want to wear.”

Moldovan will tee off with Germany’s Yannik Paul and South Africa’s MJ Daffue on the 10th hole for Thursday’s round at 12:41 p.m. On Friday morning, he’ll begin on the first hole at 6:56 a.m. They aren’t the most favorable tee times, but Moldovan doesn’t seem to care. He’s just happy to have the opportunity to live out a childhood dream.

“It’s cool to win a college or amateur tournament. It’s a really cool feeling. But that’s probably as happy as I’ve been on a golf course when I found out I qualified,” Moldovan said. “The lifelong dream for me has been to play on the PGA Tour and I have the chance to play in a major championship. It still hasn’t hit me yet that that’s going to actually happen. It’s hard to imagine it still.”

Moldovan won three events in the spring, including the NEXUS Collegiate, the Southern Intercollegiate and the Robert Kepler Invitational. After the season, he earned a third-team PING All-American award and first-team All-Big Ten honors. His scoring average of 71.03 was the lowest by a Buckeye golfer since 1980, besting the 71.50 average from his freshman season.

The 5-9, 160-pound Ohio State student-athlete from Uniontown, Ohio, will be among the sport’s best competitors in Brookline. He won’t have their experience or their expertise, but he’ll provide the same courage and strength required to go the distance. It’s time for Moldovan to take the stage on one of golf’s four biggest stages.

“It’s still crazy, wrapping my mind around it,” Moldovan said. “But at the same time I’ve been working really hard for it and I’ve always wanted a chance to test my game against the best players in the world. I’m just excited and thankful for that chance.”

When Adelaide Aquila sees a record, she knows she’ll break it. On Thursday, the Ohio State track and field star won the NCAA Championship, defending her 2021 title and shattering the collegiate record ad program record with a 19.64m toss.

Aquila had the top-four throws in the national competition. The fifth-longest toss belonged to Jorinde Van Klinken of Arizona State — the event’s runner-up finisher — who threw an 18.58m. Nebraska freshman Axelina Johansson placed third at 18.06m.

As a former walk-on, Aquila turned into an Ohio State Female Athlete of the Year and multi-title winning shot put competitor for the Buckeyes. Last summer, she represented Team USA at the Tokyo Olympics in the event, making this year’s NCAA Championship another chapter in her decorated story.

“It’s definitely a crazy experience, even just going back thinking about it right now,” Aquila told TeamUSA.org earlier this week. “It still feels so surreal. But I would honestly just say that it was a testament to my hard work, trusting the process and ultimately realizing what I’m capable of.”

Aquila took advantage of Ohio State’s track and field resources during her career, developing into one of the sport’s most relentless competitors. With world-class athletes, coaches and performance specialists surrounding her in various settings, she will continue progressing with record-breaking potential at every turn.

“I’m looking to make the most of it and have fun with this great competition at the NCAAs,” Aquilla said before the event.

It’s safe to say Aquilla did that when she stepped on the highest level of the championship podium in Eugene, Ore., capping another tremendous season in an Ohio State uniform.

After Aquilla defended her shot put title, Anavia Battle ran well in the 200 meter, finishing in third place at 22.33 seconds. Jaimie Robinson followed in the triple jump, taking 12th place at 13.14 meters. Alexus Pyles also competed in the heptathlon, finishing 13th overall with a first-place finish in the 100-meter hurdles (13.07 seconds) and a second-place finish in the long jump (6.18 meters).

The 4×100 meter relay team of Yanique Dayle, Battle, Nya Bussey and Leah Bertrand finished sixth with a time of 43.52 seconds.