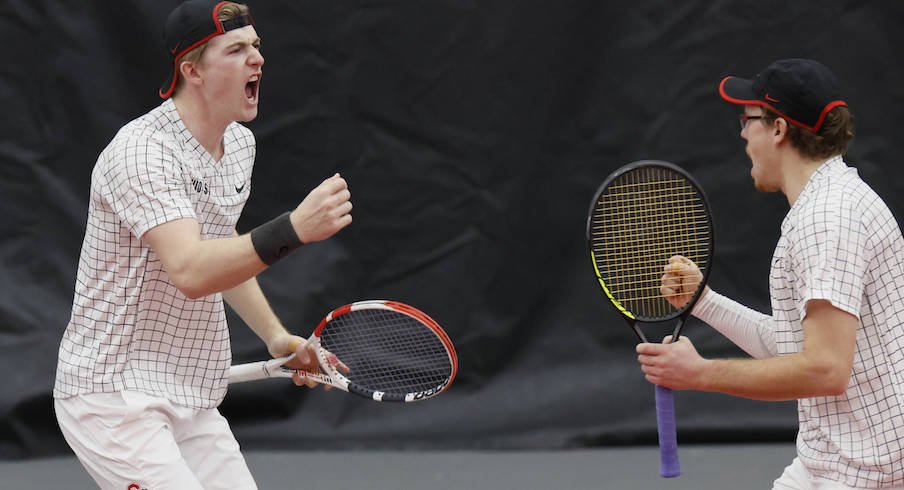 Ohio State is on an unprecedented run in indoor men’s tennis, claiming its fourth-consecutive win over a top 10 opponent — this time a 7-0 thrashing of No. 8 Wake Forest.

With Sunday’s sweep, Ohio State has swept four top-10 teams in four consecutive matches. The Buckeyes defeated then-No. 1 Tennessee, then-No. 6 Virginia and then-No. 10 Kentucky in their previous three competitions. OSU has not lost a set since it beat Xavier 6-1 on Jan. 16. That match would have ended in a sweep had the teams not halted play after the Scarlet and Gray clinched the team victory at 4-0.

Robert Cash and Matej Vocel are the No. 1 doubles team in the NCAA, while Justin Boulais and James Trotter are ranked No. 2. Both duos are undefeated on this indoor season.

The Buckeyes also have four ranked singles players with James Trotter ranked No. 36, Cannon Kingsley ranked No. 16, JJ Tracy ranked No. 11, and Matej Vocel ranked No. 6.

Ohio State will now travel to Seattle next weekend for the ITA Indoor National Championships.

The Buckeyes ended the 2022 Ohio State Winter Invitational with 19 swimmers achieving season or career-best times on Sunday at the McCorkle Aquatic Pavilion in Columbus.

Five Buckeyes raced in the 200 backstroke finals, with Brandon Day winning the men’s race. He improved his personal-best time set in the prelims with a 1:45.07 finish. Tim Kalin also set a career-best in a time of 1:50.12.

Mairin O’Brien improved her 100m freestyle to finish in 50.37 — a new season-best. Amanda Palutsis finished second. She beat her preliminary performance at 50.48. Makenzie Dewitt finished in a time of 51.71 for fourth.

Ian Mikesell (1:58.94), Nathan Holty (1:59.46) and Michael Cooper (2:00.60) finished as the top three performers in the 200m breastroke. Mikesell and Holty bested their personal records they set in the prelims, while Cooper tied his season-best performance. Leah Baker won the 200 breaststroke final with a career-best time of 2:14.85 for the women.

Ohio State defenseman Sophie Jaques has earned the WCHA’s Defender of the Week award for the seventh time this season.

Jaques tallied five points for the Buckeyes last week. In the team’s first game against Bemidji State, she collected two points from two assists. She added three points in Ohio State’s 8-1 win over the Beavers on Feb. 5 on a goal and two helpers. In the Buckeyes’ game at St. Cloud State, she tallied three blocked shots.

A civil engineering major from Toronto, Ont., Jaques became the 14th Buckeye to record 100 career points and just the third Ohio State defenseman to hit the milestone last weekend. She owns the program record for season points from a defenseman with 52 points in 2021-22.

Ohio State concludes the regular-season schedule at home this weekend against Wisconsin. The Buckeyes and Badgers meet at 6 p.m. Friday and 3 p.m. Saturday.

Ohio State senior Jesse Tyndall was named Big Ten Gymnast of the Week following his performance against Michigan on Saturday. He is the first men’s gymnast to claim a weekly conference honor this season.

Tyndall led Ohio State to a decisive 403.600-398.100 victory over a previously undefeated Michigan team on Saturday, winning both the all-around competition and the parallel bars. Tyndall’s 81.050 in the all-around makes him one of three individuals in men’s collegiate gymnastics to reach 81 points in the all-around in 2022. His 13.800 on parallel bars was a season-best as he captured the event win in the anchor spot.

The Saskatoon, Saskatchewan, native, also recorded a season-high 14.150 on floor routine, a career-high 13.450 on pommel horse and a season-high 13.950 on vault. It was his first win of the season on parallel bars and in the all-around, which brings his season total to four wins.