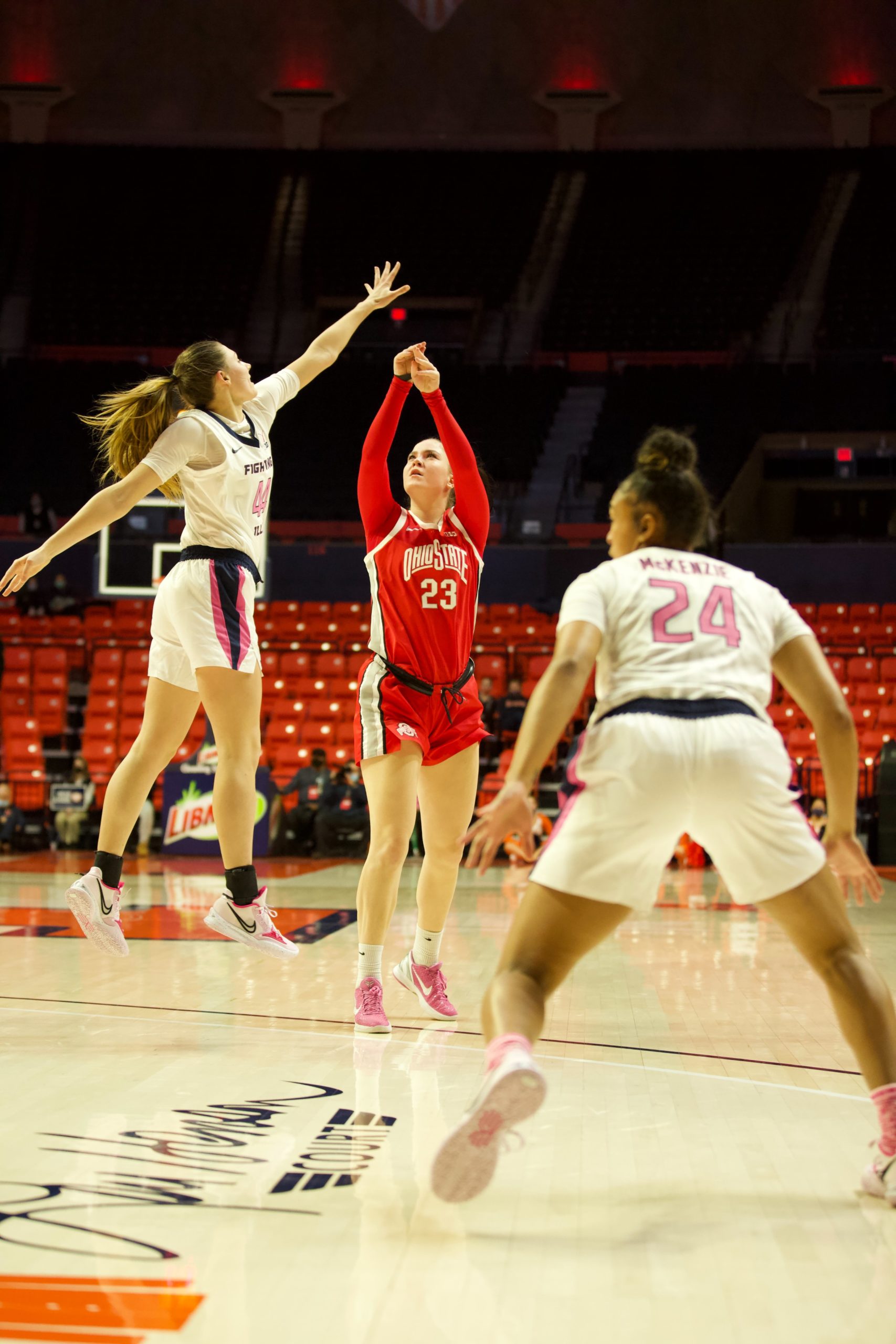 The 18th-ranked Buckeyes played close with the Fighting Illini through the opening minutes, knotted up at 11 with 4:16 remaining in the first quarter. Illinois guard Alyssa Nye accounted for all of her team’s points to open the contest.

Ohio State missed its first four shots of the game, but got on the board with points from senior guard Taylor Mikesell and a triple from redshirt sophomore guard Rikki Harris.

After the game got tied up by Illinois, the Buckeyes took off on a 16-4 run to close the quarter. The run started with a jumper from Sheldon, and following a steal from freshman forward Taylor Thierry, Sheldon scored again for the second time in just 10 seconds. Harris capped the run off with a buzzer-beating 3-pointer to give Ohio State a 27-15 lead at the end of the first.

Ohio State outrebounded Illinois in the first 12-6, but Fighting Illini responded with a strong effort on the boards, winning the battle 12-9 in the second frame as they attempted to stay in the contest.

Illinois shot better in the second quarter, 6 of 14 from the field compared to just 5 of 15 for the Buckeyes, but Ohio State still led 42-30 heading into the locker room after five second-quarter points from junior forward Rebeka Mikulasikova.

While Ohio State was effective defensively in the first half, forcing 13 turnovers and turning those into 11 points, the press worked to perfection early in the third as the Buckeyes increased their lead.

In just 3:07 of play to begin the second half, Ohio State stole the ball five times, four of which resulted in scores for the Buckeyes as Illinois had no answer for Ohio State’s swarming defenders. Harris was the main benefactor of Illinois’ slippery ballhandling, knocking down two triples – including one that banked in after she faded away into the left corner – as she finished with a career-high 17 points.

The Buckeyes’ onslaught continued well into the third, with Ohio State eventually taking a 63-30 lead after beginning the half on a 21-0 run. The Fighting Illini finally broke through with a 3-pointer at the 4:53 mark, but the game was well in hand by that point.

The Buckeyes understandably slowed things down in the fourth as Illinois outscored them 24-11, but it was no matter, as Ohio State took home the 86-67 win. It was the second-highest margin of victory in a Big Ten contest this season for the Buckeyes, just shy of their 21-point win over Illinois, 90-69, on Jan. 6.

The Buckeyes finished shooting 49.3 percent from the field while holding Illinois to just 40.0 percent.

Ohio State will stay on the road to take on No. 13 Maryland on Thursday at 8 p.m. The game will be broadcast on Big Ten Network.