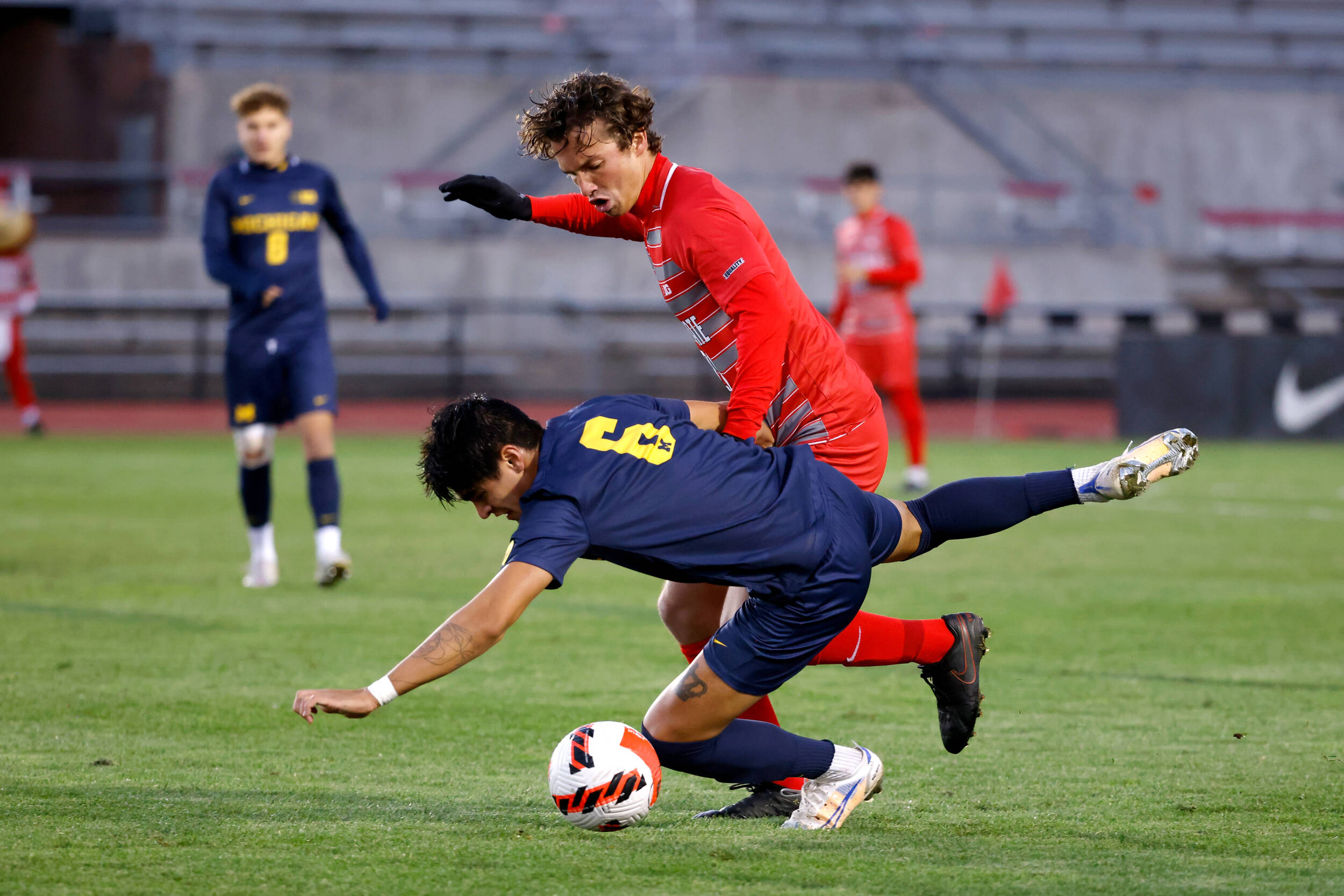 Xavier Green scored first in the game, sending in a goal in the 18th minute. He took a pass from junior Channing Chasten to the right side of the field and sent a powerful kick to the top left corner of the net. Michigan’s Kevin Buca tied the game in the 33rd minute to send the teams tied a 1-all heading into halftime.

The Buckeyes were the aggressors for the final 10 minutes of the game, providing several quality chances before Wootton’s headed-in goal from freshman Anthony Samways. Ohio State goalkeeper Noah Lawrence made four saves on 12 Michigan shots (five on target).

Ohio State traveled to Piscataway, N.J., for a battle with Rutgers on Saturday. The Buckeyes fell 4-0 to the Scarlet Knights at Yurcak Field after failing to convert on multiple goal-scoring opportunities. Tomasso Villa and Thomas Gilej had shots that went off the crossbar and the left post but didn’t cross the end line.

The loss to Rutgers ended the 2021 fall season for the Buckeyes. Ohio State finished with a record of 6-9-1.

Ohio State field hockey closed out the Big Ten portion of its 2021 schedule on Friday night, falling to No. 4 Maryland 6-0 on a cold, rainy night in College Park, Md.

The game was Ohio State’s fifth in a row against a top-10 team after facing No. 6 Northwestern, No. 1 Iowa, No. 7 Penn State and No. 3 Rutgers in the previous four games. With the loss to Maryland, the Buckeyes finished 1-7 in the Big Ten — college field hockey’s best conference. Even the Terrapins, one of the nation’s top teams, ended with a 4-4 record.

Ohio State completed its season with a road game against Saint Joseph’s in Philadelphia. In a back-and-forth regular-season finale, Saint Joseph’s scored on a penalty stroke with 55 seconds remaining in the fourth quarter to pull out with a 4-3 win over the Buckeyes.

Sarah Charley, Emma Goldean and Jessica Hourihane all found the back of the cage for the Buckeyes. Chaley also added an assist to Goldean’s goal early in the fourth quarter.

In the first game, the Buckeyes took down the Huskies, 5-2, with Ramsey Parent, Paetyn Levis (2), Hadley Hartmetz and Sophie Jacques scoring goals.

Parent tipped in a shot from Riley Brengman to put her team on the board early in the first period. Levis added her first goal at 14:48, which was quickly followed up by Hartzmetz’s first Buckeye goal at 16:19, giving Ohio State a 3-0 lead heading into the first break.

The Huskies fired back in the second period, as Emma Gentry and Klara Hymlarova scored goals at 3:32 and 4:51, respectively. Levis added her second goal of the night to put an end to St. Cloud’s scoring. At the beginning of the third, Jacques gave the game its 5-2 final.

With 10 goals, the Buckeyes tied the program record for goals in a game. The last time the team scored in the double digits was on Oct. 27, 2012, in a 10-1 win against Bemidji State. Ohio State also set a record for most points in a game with 29 set in the aforementioned game.

Ohio State’s seven goals in the second period gave the team another record, breaking the previous mark by two. Fourteen Buckeyes recorded at least one point in the game, and Clair DeGeorge tied her career-high points in a game and goals in a game with three. Jacques also set new personal records with three points and two goals in the contest.

Ohio State women’s volleyball had its way with Michigan this season. In two games, it never lost a set to the Wolverines. On Friday night, the Buckeyes claimed their 13th sweep (33-31, 25-18, 25-17) in a dominant performance against their rivals from up north.

During the match, Hannah Gruensfelder moved into third in program history in career digs with 1,395. Gabby Gonzales reached 10 digs for the sixth time this season and at least 10 kills for the 15th time, notching her fifth double-double of the year.

Kylie Murr recorded double-figure digs for the 18th time, finishing with 14. Arica Davis led the Buckeyes with five blocks and Emily Londot reached 10 kills for the 15th time this year.

Gonzales reached double-figure kills again for Ohio State — this time reaching a career-high 22  in the four-set match. Mia Grunze totaled 13 kills in the match, while Murr and Mac Podraza led the Buckeyes in digs with 16 and 15, respectively.

The Buckeyes will continue their season on Thursday when they host No. 11 Minnesota for a 7 p.m. match. The game will be broadcast live on BTN.