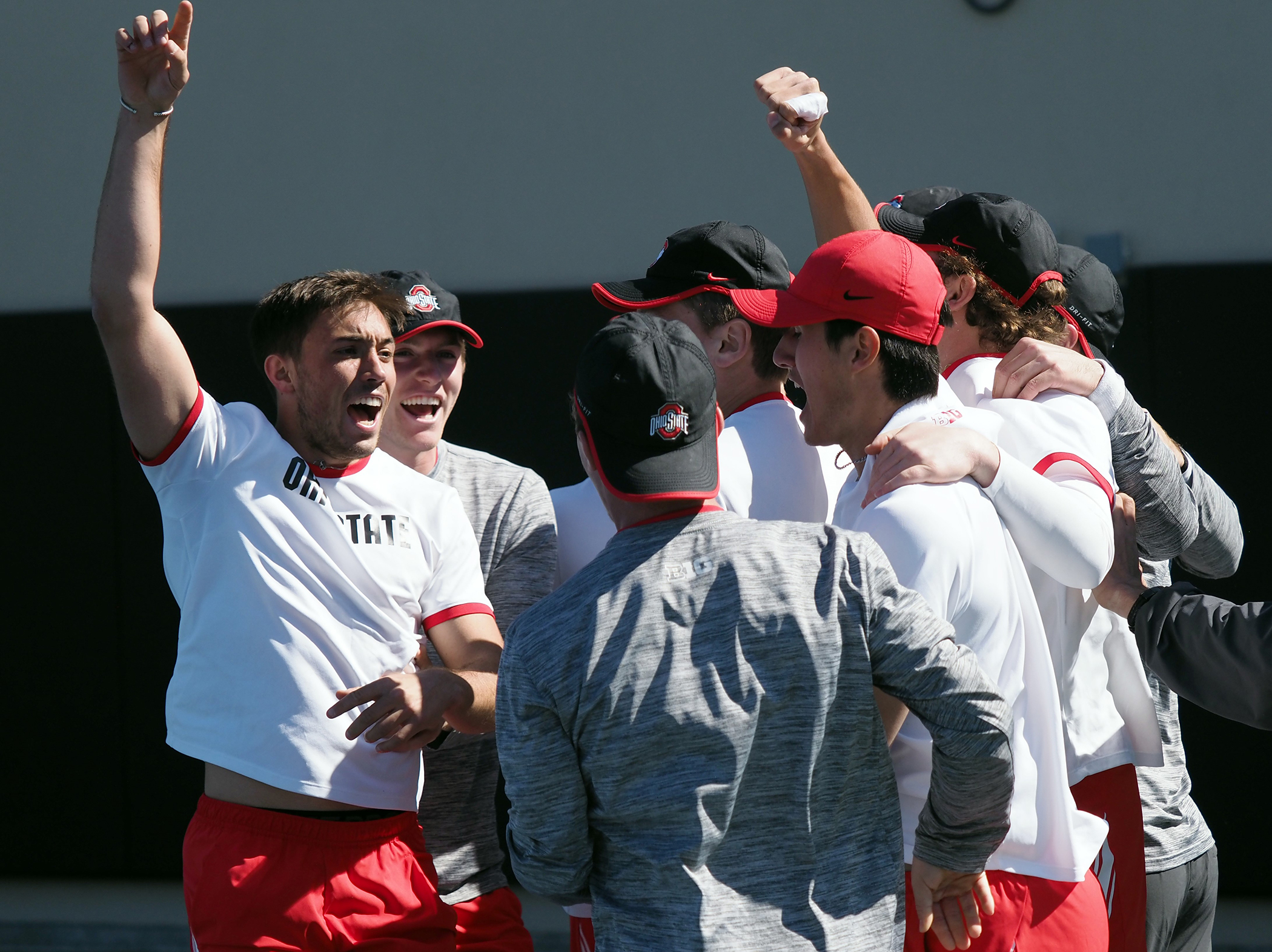 Ohio State men’s tennis finished its Big Ten matches with a perfect record, capturing its 15th consecutive conference crown and the No. 1 seed at next weekend’s Big Ten Championship.

The Buckeyes (22-2, 7-0) are the No. 2 team in the ITA Collegiate Tennis rankings behind Texas Christian. Their final two regular-season matches against Wisconsin and Nebraska were canceled due to COVID-19 issues within the program. Ohio State ended its season having swept six of its seven opponents, surrendering one point to then-No. 7 Michigan at the Ty Tucker Tennis Center on April 15.

Cannon Kingsley, Matej Vocel and JJ Tracey will lead Ohio State in the post-season. All three Buckeyes are integral to the team’s success in singles and doubles competition, proven by their recognition in the ITA polls.

Kingsley is the No. 9-ranked singles player with an 18-4 record, including a 9-2 mark against ranked opponents. Last season, he was the unanimous Big Ten Player of the Year and earned All-American honors in 2020. The Northport, N.Y., native is a former No. 1 overall recruit aspiring to become a professional tennis player after his Ohio State career.

Vocel has been a pleasant surprise for the Buckeyes this season. The former Oklahoma State star transferred to Columbus in the offseason and found immediate success. He trails behind Kingsley at No. 10 with a 26-4 record and a 15-4 mark against ranked opponents. Vocel partners with teammate Robert Cash to create the No. 1 doubles team in the nation, according to the ITA polls. The pairing has an NCAA-leading 29 wins compared to only three losses.

Tracey is the No. 19 singles player at 31-4 with a 6-3 record against ranked foes. His 16-0 dual record leads the Buckeyes, as does his 15-4 count in tours. Last season, the Hilton Head, S.C., native, was the Big Ten Freshman of the Year and the ITA Midwest Region Rookie of the year after a tremendous first season in Columbus. He continued with a dominant sophomore campaign in singles while making a significant impact with Kingsley in doubles.

Ohio State women’s tennis defeated Rutgers on Sunday to close Big Ten competition with a perfect 11-0 record, capturing its second straight conference regular-season championship and the No. 1 seed at the Big Ten Tournament.

With the team’s win over the Scarlet Knights, the No. 10 Buckeyes (18-4) earned a “bye” for the quarterfinals of the conference championship in Iowa City. They are the defending champion and have three postseason titles in program history.

“I’m proud of the team,” head coach Melissa Schaub said. “It was a good regular season, and it was nice to cap it off with a solid match today. It was a nice Senior Day for Luna (Dormet). She has battled through so much, and it was great to have her out there in singles and doubles. We are excited to get to Iowa and start the postseason this week.”

Irina Cantos Siemers leads Ohio State with a 32-8 record in singles matches with a 7-5 mark against ranked opponents. She combines with Sydni Ratliff to create the Buckeyes’ best doubles team at 15-6. The Bremerhaven, Germany, native was an All-American in 2021, becoming the sixth Buckeye to earn that honor and fourth to be a singles All-American.

Behind Cantos Siemers sits Isabelle Boulais, the No. 33-ranked singles player according to the ITA rankings. Boulais went 17-9 in the regular season with a 6-4 mark against ranked opponents. She partners with Kolie Allen in doubles, and the pair has amassed a 10-7 record together. The Mississauga, Ontario, native was the 2019 Big Ten Freshman of the Year and is a two-time first-team All-Big Ten honoree.

The Buckeyes will travel to Iowa City for the Big Ten Tournament from Wednesday afternoon to Sunday evening. They will begin their matches on Friday after receiving a two-day “bye.”

Ohio State sophomore Maxwell Moldovan entered the final round of the Kepler Intercollegiate two strokes behind the leader. He then fired a 4-under 68 to win the tournament. The win was the third this season for Moldovan, who has put together a par or better performance in his last 13 rounds.

On Sunday, Moldovan had one birdie through the first 13 holes. In his final five opportunities, Moldovan went up-and-down for a birdie on the 14th hole and only needed four strokes on the par-5 15th, putting him in front with three to play. He parred his next two holes and needed a par at the 18th hole to secure a tournament win. Instead, Moldovan sunk a 20-foot birdie to win the Kepler by two shots.

Moldovan became the 24th Buckeye to win the Robert Kepler Intercollegiate and the first since Daniel Wetterich won in 2019. With Moldovan’s title and a couple of other strong performances, Ohio State finished runner-up at 17-under par. It was the fifth straight tournament that the Buckeyes finished under-par for the weekend.

Sophomore Adam Wallin closed his first round with five birdies in the final six holes. He nearly matched that on Sunday with three birdies in his final six opportunities to finish at 1-under. Wallin tied for 8th at 4-under par for the tournament. Junior Patrick Schmucking finished at even-par for the 54 holes and took 18th place, while JonErik Alford and Gran Engle each shot at 1-over par at Columbus Country Club.

Ohio State will compete in the Big Ten Championship at French Lick Resort in French Lick, Ind., this weekend, with the first round starting on Friday morning.