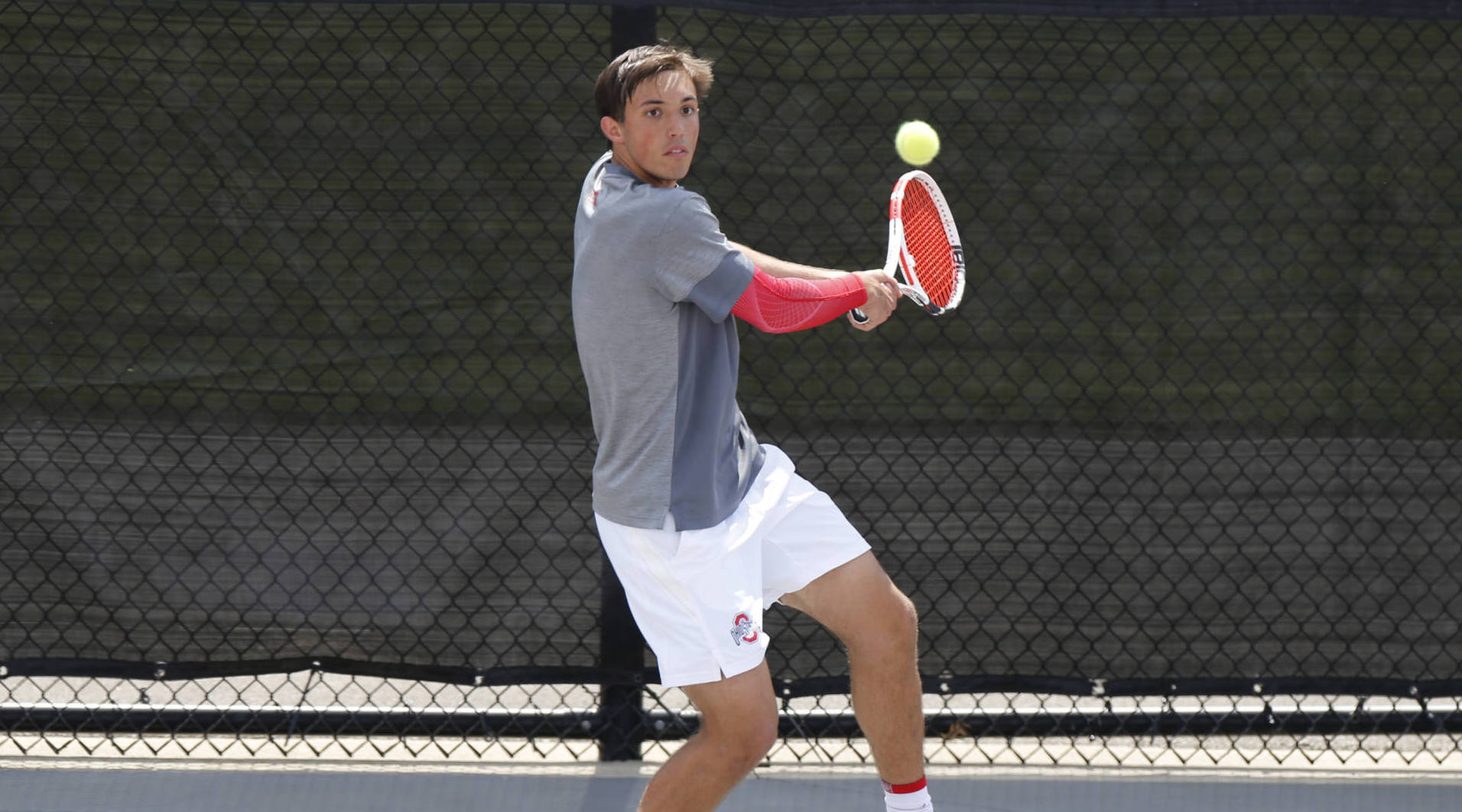 The No. 5 Ohio State men’s tennis team dominanted host No. 17 North Carolina 4-0 on Sunday to earn a spot at the ITA Indoor Championships.

The Buckeyes rebounded with two convincing victories over No. 26 Arizona State Saturday and the Tar Heels after losing last season’s opening weekend. The win also avenged a loss to North Carolina in the quarterfinals of the NCAA Tournament in 2019. It helped Ohio State improve to 27-1 all-time and 13-1 in the championship round of the ITA Kickoff Weekend tournament.

Matej Vocel and Robert Cash claimed a 6-1 victory over the No. 20 Casey Kania and Logan Zapp. After a UNC win on the first court, Cannon Kinglsey and JJ Tracy defeated Peter Murphy and Benjamin Sigouin 6-3 on court three to secure the doubles point for Ohio State.

In singles, the Buckeyes took five of the six first sets. Vocel cruised past Sigouin 6-1, 6-3 to improve to 15-3 on the season. Justin Boulais won the third point with a 6-4, 6-2 win over Henry Lieberman and then James Trotter clinched the win with a 6-2, 6-4 win over Zapp on court four.

Kinglsey battled No. 60 Brian Cernoch to a 9-7 first-set tiebreaking win on court one while Cash was also leading 6-4, 2-3 on court six. Tracy dropped the opening set 7-5 to Mac Kiger but rebounded to take the second set 6-1.

The win sends the Buckeyes to the ITA National Indoor Championships in Seattle, Wash., on Feb. 18-21. Ohio State will still host two big weekends at the Ty Tucker Tennis Center against No. 1 Tennessee on Feb. 4 and No. 6 Virginia on Feb. 6.

On Sunday, Ohio State women’s tennis defeated No. 20 Tennessee 4-0 in Columbus. The No. 11 Buckeyes advanced to the ITA National Team Indoor Championship after finishing the weekend with wins over Oklahoma State and the Volunteers. Against Tennessee, the Buckeyes swept the doubles matches for a 1-0 lead and then had 6-3, 6-3 wins on the top three courts from Sydni Ratliff, Irina Cantos and Isabelle Boulais.

Ohio State (2-2) will be making its sixth trip to national indoors in the last seven years, including its fourth consecutive and seventh trip overall. The women’s championships will be held in Madison, Wis., from Feb. 11 to Feb. 14.

Ohio State defenseman Sophie Jaques was named the WCHA Defender of the Week on Monday. She recorded a point on every goal the Buckeyes scored last weekend against then-ranked No. 2 Minnesota for her second WCHA honor of the month.

In Saturday’s overtime win against the Gophers, Jaques assisted both goals for the Buckeyes. She scored the team’s second goal in Game 2 and added assists on the other two goals to collect four assists in the series.

Jacques leads the team with 44 points this season. She also tops all Buckeyes in goals (16) and assists (28). The Toronto, Ontario, native ranks second in the nation with 1.83 points per game and 1.17 assists per game. She is also top 10 in the NCAA with her eighth-most goals per game (0.67).

Jaques has already cemented her name in the Ohio State record book with her success this season despite a significant amount of games remaining for the Buckeyes. She is one point shy of the program record of season points for a defenseman (45) set by Tessa Bonhomme in 2007-08. Jacques is fourth all-time in career points (93) and career WCHA points (65) for defensemen. Finally, Jaques is seven points shy of becoming just the third Ohio State defenseman to hit 100 career points.

This week’s conference honor is her second of the month and eighth WCHA honor for the year.

Ohio State kicks off a five-game Minnesota road trip this weekend, starting with Minnesota State. The Buckeyes and Mavericks face off at 7 p.m. ET Friday and 3 p.m. ET Saturday from Mankato, Minn.

Ohio State women’s gymnastics rallied in the final rotation to defeat Rutgers 196.025-195.750 on Sunday night at the Covelli Center. With the narrow victory, the Buckeyes improved to 2-2 (2-0 Big Ten) this season.

“I am happy with the way the floor team came back and stepped up,” head coach Meredith Paulicivic said. “Ahead of the rotation, I told the team that we were still in it, but we would have to fight for every last tenth, so I am really happy and proud to see the team come through big time.”

Ohio State started the meet with a season-high 49.025 on vault. Freshman Jenna Hlavach posted a career-high 9.875 for the Buckeyes to finish third overall. Kaitlyn Grimes matched her career-high on the apparatus, scoring a 9.725.

The team improved on its season scores with a 49.250 on uneven bars. For the second week in a row, Nicole Riccardi scored a 9.900 for the Buckeyes to win the event and tie her career-high. Lexi Edwards also tied her career-high with a score of 9.825, while Zoe Schweitzer (9.825) and Alexis Hankins (9.800) set season-highs on the apparatus.

Ohio State won the meet on the floor exercise, scoring a season-high 49.450 with three gymnasts posting 9.900 or higher scores. Edwards and Hlavach tied for first with a score of 9.925. Hlavach’s performance was a career-high —her third floor title on the year. Edwards set a career-high mark and earned her first floor title and third event title of the season with her routine on Sunday. Claire Gagliardi tied for third overall with a season-high 9.900 score. Savannah Gonzalez, who hit a career-high 9.825 for her team, led off the Buckeyes in the rotation. Hankins recorded a season-best 9.875.