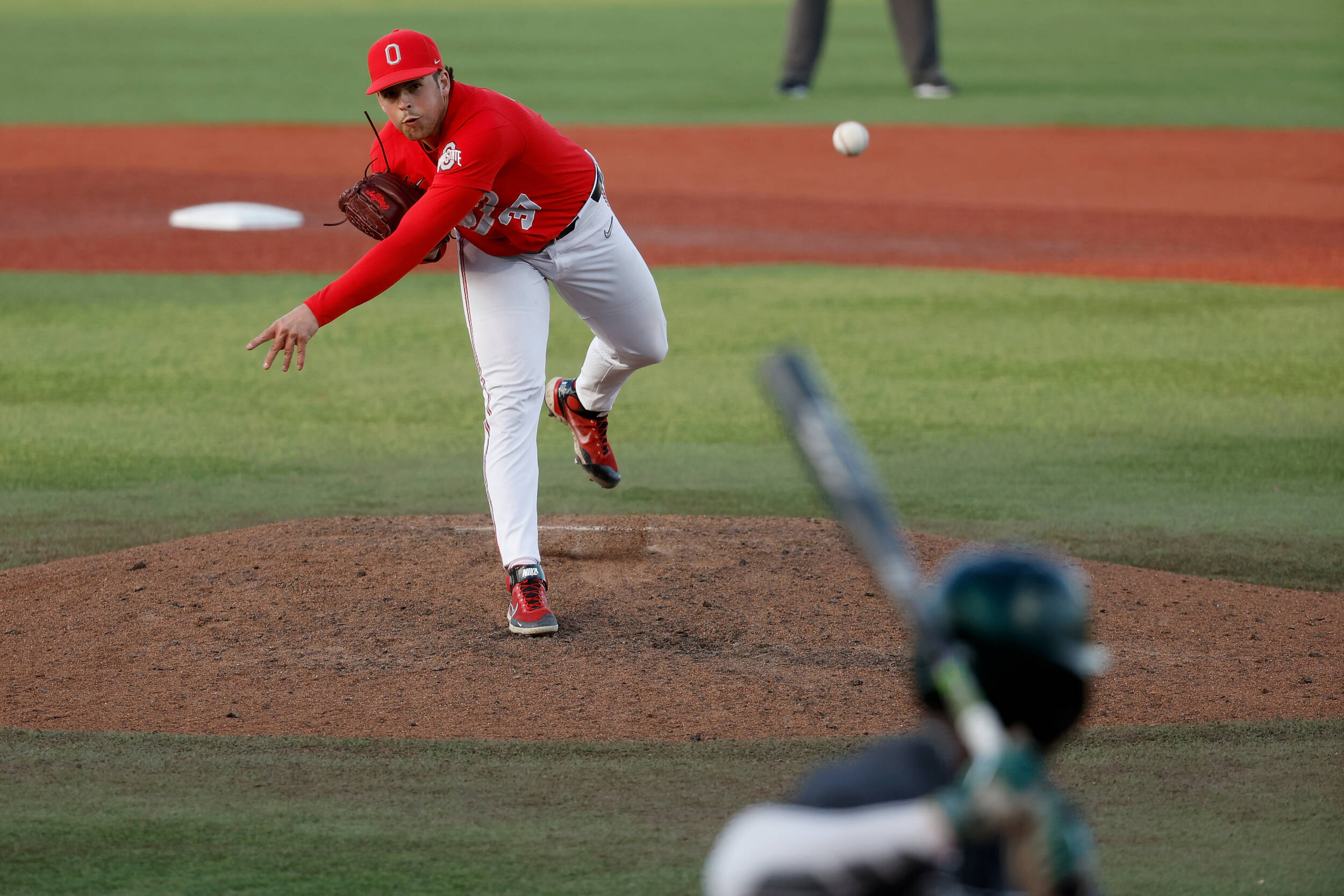 After falling in Game 1 of the Sunday doubleheader, the Buckeyes (11-17, 2-5 Big Ten) combined strong relief pitching from Griffan Smith and timely hitting to beat the Spartans, 8-7.

Ohio State trailed Michigan State for most of the contest. However, the team continued to cut into the lead until moving in front in the eighth inning. The Buckeyes are winners in three of their last four games, and head coach Greg Beals thinks his players can feel the momentum building.

“Losing the first game makes you wear it a little bit,” Beals said of doubleheaders. “We didn’t have that winning energy to begin the second game. Griffan Smith flipped the switch for us, and our guys got back in the moment. To put up seven runs in our last three at-bats speaks to the character that our guys have.”

The Spartans started the scoring in the first when sophomore outfielder Jack Frank sent a two-run home run over the left-field fence off Ohio State left-handed pitcher Gavin Bruni. Frank’s two RBIs were the only runs Bruni allowed while on the mound in three innings of work. He also had two strikeouts and two walks.

Ohio State designated hitter Blayne Robinson hit a leadoff double in the second inning. He moved over to third base before infielder Tyler Pettorini sent him home with a sacrifice fly, cutting the Spartan lead to 2-1.

In the fourth inning, Michigan State extended its lead when it scored on an error. It added two more runs on another two-run homer off the bat of infielder Dillon Kark. Smith relieved right-hander Trent Jones and finished the inning. He continued pitching for the rest of the game, finishing with 5 1/3 innings pitched, striking out four, walking one and allowing no runs.

“We’re light on arms right now with so many guys pitching,” Smith said. “But I was feeling good, and my arm wasn’t feeling tired. I told coach, ‘Just give me the ball. I’m good to go.'”

In the sixth inning, Ohio State answered with offense after shortstop Zach Dezenzo reached on an error. Outfielder Kade Kern moved Denzenzo with a single and Robinson knocked him in with a sacrifice fly. Catcher Archer Brookman drove in Kern on an RBI single to make it 5-3 after six. The Buckeyes piled on in the seventh, using an RBI double from outfielder Trey Lipsey to make it 5-4 after that frame.

“Our offensive approach is always to pass the baton,” Dezenzo said. “Each individual puts together a good at-bat, and we keep doing that over and over again, which is going to lead to good results.”

The Spartans failed to score in the top of the eighth, and Ohio State used that opportunity to move in front. With runners on first and third base, Pettorini knocked in Robinson on an RBI groundout to tie it. Outfielder Mitch Okuley gave the Buckeyes their first lead with an RBI single one at-bat later.

Immediately after, infielder Marcus Ernst walked and Denzenzo brought Okuley and Ernst home with a two-RBI triple, extending the Buckeye lead to 8-5.

Michigan State scored two more times in the top of the ninth, but it fell short of making a complete comeback. After Pettorini committed an error and Frank advanced to third base, MSU catcher Bryan Broecker sent a two-run single to the outfield to make it 8-7.

On the game’s final play, Michigan State outfielder Casey Mayes hit a single up the middle, but the Spartans boldly sent Broecker home as he rounded third base. A Pettorini toss thew Broecker out at the plate. His run would have tied the game.

Ohio State women’s tennis swept Purdue, 4-0, on Sunday with a doubles point and three straight singles wins in West Lafayette, Ind. The No. 7 Buckeyes (14-4, 7-0 Big Ten) have won six straight matches and 12 of their last 13.

Ohio State men’s lacrosse earned a 12-10 win over Johns Hopkins on Saturday behind 11 combined points from Jackson Reid and Jack Myers. The team captains paired six goals and five assists to power the Buckeyes to the two-goal victory.

“We beat a good team today,” head coach Nick Myers said. “It’s never easy putting Big Ten wins together. We got some timely goals and did a good job on defense and in goal to make winning plays. We will enjoy this one and get right back to work.”

The Buckeyes (8-3, 2-1 Big Ten) turned a 9-8 deficit into an 11-9 lead with 10:36 remaining when Reid, Scott White and Connor Mitchell scored fourth-quarter goals. Johnny Wiseman put the cherry on top with a score at 7:09, pushing in front by two.

Reid matched his career-high with five goals and added a helper. Myers had four assists and scored one goal. Mitchell and Wiseman also had two scores. Skylar Wahlund made eight saves in the net, including three in the final frame. Justin Inacio won 14 of 25 faceoffs and recovered seven ground balls.