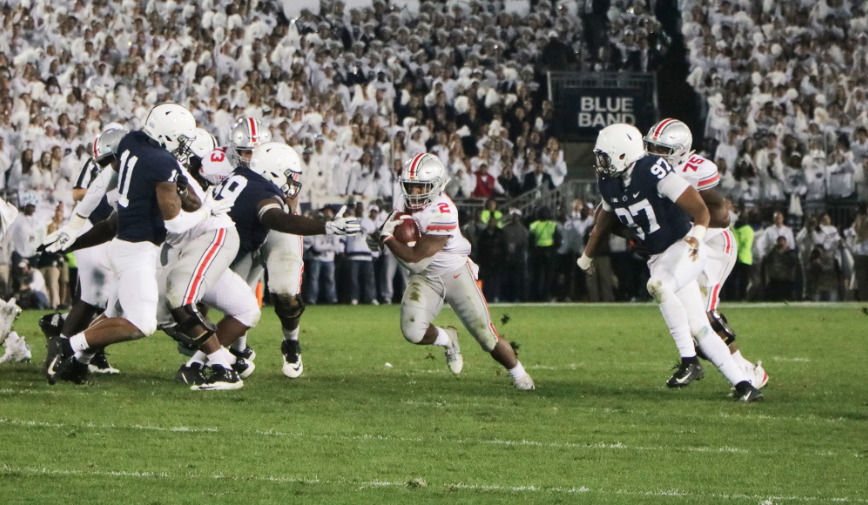 The biggest plays Ohio State had in its thrilling 27-26 victory over Penn State on Saturday night didn’t come on big throws down field or running backs breaking through the line of scrimmage.

They came on a handful of screens, both to the running back and wide receivers, something we have not seen much of in the past from the Buckeye offense.

Yes, we saw a number of bubble screens last season to the likes of Parris Campbell on run-pass option plays, but what Ohio State ran against the Nittany Lions on Saturday was different, and it’s because of the new personnel the Buckeyes have on offense this season.

For starters, the Buckeyes rarely, if ever, ran running back screens in the first six years of the Urban Meyer era in Columbus. Against Penn State, two of the biggest plays came on screens to J.K. Dobbins, one of which found the end zone.

So what brought out the running back screen after so many years of the play collecting dust in the Ohio State playbook? Meyer said Monday it has a lot to do with the Buckeyes’ new personnel, especially at quarterback and the coaching staff.

“Ryan (Day) and Kevin (Wilson) a lot. We are a different team. The drop-back pass, we drop back a lot. So the natural progression is a tailback, slow screen,” Meyer said.

When Braxton Miller and J.T. Barrett were running Meyer’s offense, much of the passing game was littered with run-pass options, quick throws and play-action passes. With Dwayne Haskins, a more traditional passer, the Buckeyes set up to pass from the pocket more often than ever since Meyer took over in 2012.

Because Haskins drops back so much in Ohio State’s new-look offense, the play works better now than it might have with Barrett at the controls, as Barrett’s passes were often shorter in terms of the routes and didn’t require him to take a traditional drop.

The second running back screen was similar to the first, one Meyer called the second biggest play of the game behind just Binjimen Victor’s 47-yard catch and run midway through the fourth. Dobbins’ second reception came on the first play of Ohio State’s game-winning, 96-yard touchdown drive. Similar to the first play, Ohio State takes advantage of Penn State’s aggressive defense, allowing the pass rush to flow upfield, allowing the linemen and Dobbins to set up the big play.

These screens, complimented with Haskins’ quick release, will likely become a bigger part of the game plan as the season progresses and give opponents more to prepare for. It will also slow down opposing pass rushes if the Buckeyes can continue to execute the screens properly.