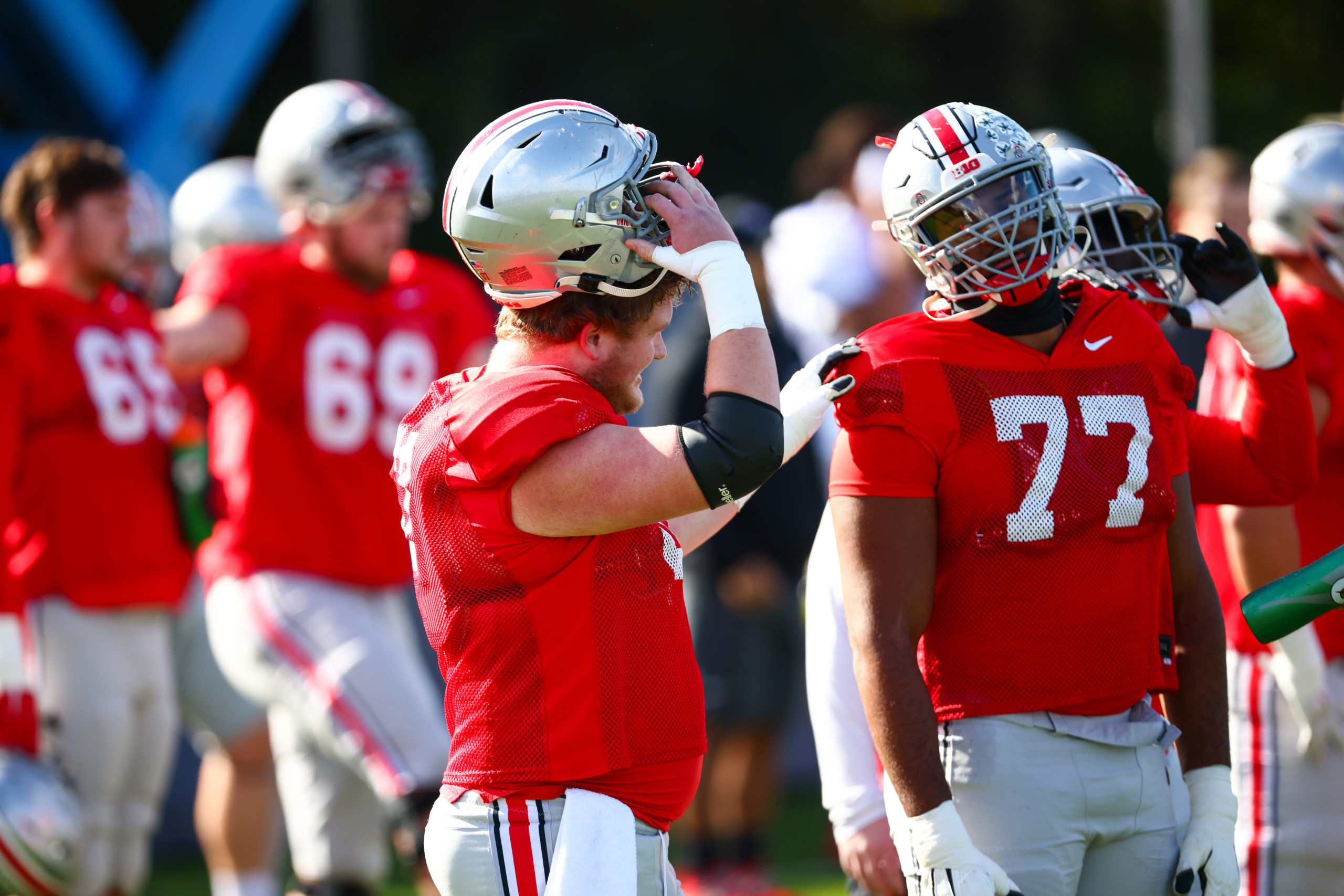 Ohio State’s offensive line will look a lot different in 2022 — both in personnel and scheme. The Buckeyes return three starters from last season, including Paris Johnson Jr., Dawand Jones and Luke Wypler, with two new linemen set to join the mix.

Johnson opened spring practice as the team’s first-team left tackle after starting at right guard last fall, while Jones and Wypler remained in their positions as right tackle and center. Rounding out the five spots were Matt Jones and Donovan Jackson, who appear to be frontrunners for the vacated guard positions.

According to Ohio State head coach Ryan Day, Harry Miller and Josh Fryar will be unavailable for the entire spring, which will leave them at a disadvantage in positional competitions that began March 8 and will continue until the program hosts Notre Dame on Sept. 3.

While the Buckeyes’ offensive line struggled last season under Greg Studrawa, Day and his staff have expressed confidence in new coach Justin Frye, who joined the staff in January following Ohio State’s Rose Bowl victory over Utah. Johnson will lead the unit after earning second-team All-Big Ten honors in his first year as a starting guard. He has since kicked outside to tackle where he was initially recruited as the No. 9 overall prospect in the 2020 class.

“We recruited him as a tackle, we always felt like he was a tackle,” Day said. “To his credit, he wanted to get on the field last year and really learned a lot playing last year at guard. Just pad level, understanding calls, it’s really going to pay dividends for him down the road. But now making the transition to tackle is, he’s played it his whole life other than last year, so it’s not like it’s new to him but this will be his first time starting out there and he’s gotta grab onto it and own it.

“His approach every day, his work ethic, all those things are really off the charts. And I know he’s already started a great relationship with Justin so this is just a start to it. And we’ll kind of get an idea of where we are about midway through (spring), but he has high aspirations and he’s a high achiever, so when he sets his mind to something it usually happens.”

Offensive coordinator Kevin Wilson said he anticipates Johnson will earn his spot at left tackle and make quarterback C.J. Stroud comfortable knowing that his blindside will be protected from opposing pass rushers.

“Left tackle is the quarterback’s blind spot, and so it’s really, you need someone’s that gonna be very dependable. He’s a tremendous athlete with tremendous upside,” Wilson said. “I know Justin (Frye) will do a great job with him, but we’ll need a consistent player out there. Between Paris, Dawand or Zen (Michalski) or even Donovan Jackson — the most consistent player will probably be at left tackle. Right now, Paris is starting there with the opportunity to prove he’s going to be that guy. You would expect him to. The ball’s in his court.”

Wilson said Matt Jones will fit the mold for a starting guard and claimed he would be the second-string center if Wypler sustains an injury or ailment. He also offered high praise for Jackson, who appears to have the inside edge toward the other starting guard position.

“He’s got some skills that are like, ‘Wow, that’s not an O-line skill. That’s an athletic skill,’” Wilson said of Jackson. “He showed up with skill. He showed up with a lot of maturity. He doesn’t practice like a first-year guy. He doesn’t practice like a guy that just got here out of high school. He’s not practicing now in the spring like, ‘This is my first spring.’ He’s a very mature kid, very, very smart.

“I expect him as a first-year potential starter right now to be a guy that plays at a very high level. He is a very gifted, talented player and not just physically. He’s got some stuff in his heart. And he’s got a chance to be a special player.”

Still, the Ohio State offensive line might be tested by its depth. Behind Johnson, Matt Jones, Wypler, Jackson and Dawand Jones — the assumed but not confirmed starting offensive line — the coaching staff is looking for players to separate themselves. Wilson seemed impressed with Michalski and Jakob James, who could be carving themselves roles as primary backups.

“I think Zen’s coming along nicely. Jakob James has had an outstanding offseason which gives us some good depth inside. But there’s probably a little bit of separation between the five based on experience and talent,” Wilson said. “If (the other offensive linemen) can be here every day, practice every day, get better every day, they’ll have chances to be our main guys. Time’s gonna tell.”