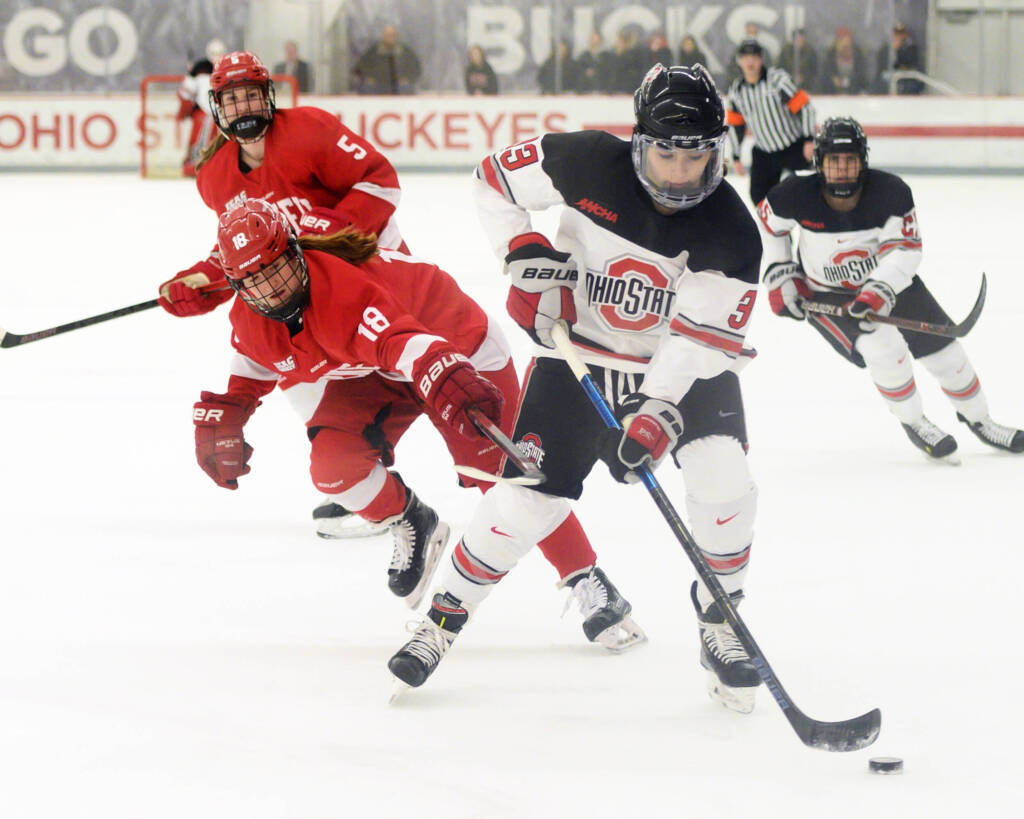 Dunne became the first Buckeye to be named to the All-UCHO First Team after having earned third- and second-team honors as a sophomore and junior, respectively.

The impact of Dunne, both on and off the ice, is not lost with Ohio State head coach Nadine Muzerall.

“The best part about Jincy, which not everyone sees, is the behind the scenes things and how she contributes to our program,” Muzerall said of Dunne. “She’s such a role model and a leader. I hope that USA Hockey recognizes this accomplishment because she’s in a very selective class.”

Dunne helped Muzerall take the program to the next level, joining a team with a losing record but becoming a national contender with two NCAA appearances in three years (the tourney was canceled in 2020 due to the coronavirus).

Maltais could not be more proud of Dunne, who was a team captain for each of Maltais’ first three seasons at Ohio State.

“Jincy deserves this more than anyone,” Maltais said of Dunne. “She works so hard and she’s such an amazing player. I’m so lucky to be on her team and I’m proud of her as well, and I’m also just truly honored to be there.”

Braendli, a standout goaltender, was playing her best hockey down the stretch, before the season was cut short due to the coronavirus. She recorded a season-high 41 saves in the Buckeyes’ WCHA Championship victory against Wisconsin.

As the WCHA Goaltender of the Month in February, Braendli posted a 5-0-1 record with two shutouts. The Zurich, Switzerland native also boasted the best goals against average (1.12) and the best save percentage (.960) of any WCHA goalie during that span.

During Ohio State’s impressive weekend against the No. 2 Badgers in the regular season, Braendli totaled 74 saves to lead the league and set a new season-high 37 saves in game two.

The Buckeye netminder was selected as the WCHA Goaltender of the Week for back-to-back weeks and earned an NCAA Second Star of the Week nod.

On the season, Braendli boasted a .929 save percentage as well as a .928 save percentage in conference play, finishing second in the WCHA. Her 1.89 goals against average was good for third in the conference, and she earned third-team  All-WCHA honors.

Maltais is one of the best forwards in program history, leading the team with a program-record 59 points on 19 goals and 40 assists as a junior in 2019-20. In addition to the scoring record, Matlais’ 40 assists also established a new single-season program record, which was last set in 2005.

In just three years, Maltais has tallied 142 career points, which already places her fifth in school history and 28 points away from the No. 1 spot.

“Emma has worked so hard behind the scenes,” Muzerall said. “She has really been grinding it out and she’s grown into being a 200-foot hockey player, and a more mature hockey player. She’s so dangerous away from the puck as well with the puck, and both Emma and Jincy have such great vision. They’re both very selfless and they’re always looking to make a play or pass.

As a team leader, Dunne would be remiss to fail to mention Maltais’ profound impact on Ohio State women’s hockey.

“She’s one of the hardest workers that I’ve ever seen,” Dunne said. “I see how she trains and how disciplined she is and how she’s asking questions and wants to get better, but also how she pushes herself and pushes others. She just really took off this year and really helped lead our team, so I’m just super proud of her and of how she’s developed the last three years, how hard she works, and the type of  person and teammate she’s become.”

Twelve different programs were represented on the All-USCHO Women’s Division I teams for the 2019-20 season. Clarkson, Cornell, Ohio State and Wisconsin led the way with three players apiece.

Below are the top three All-UCHO teams as well as the rookie team: