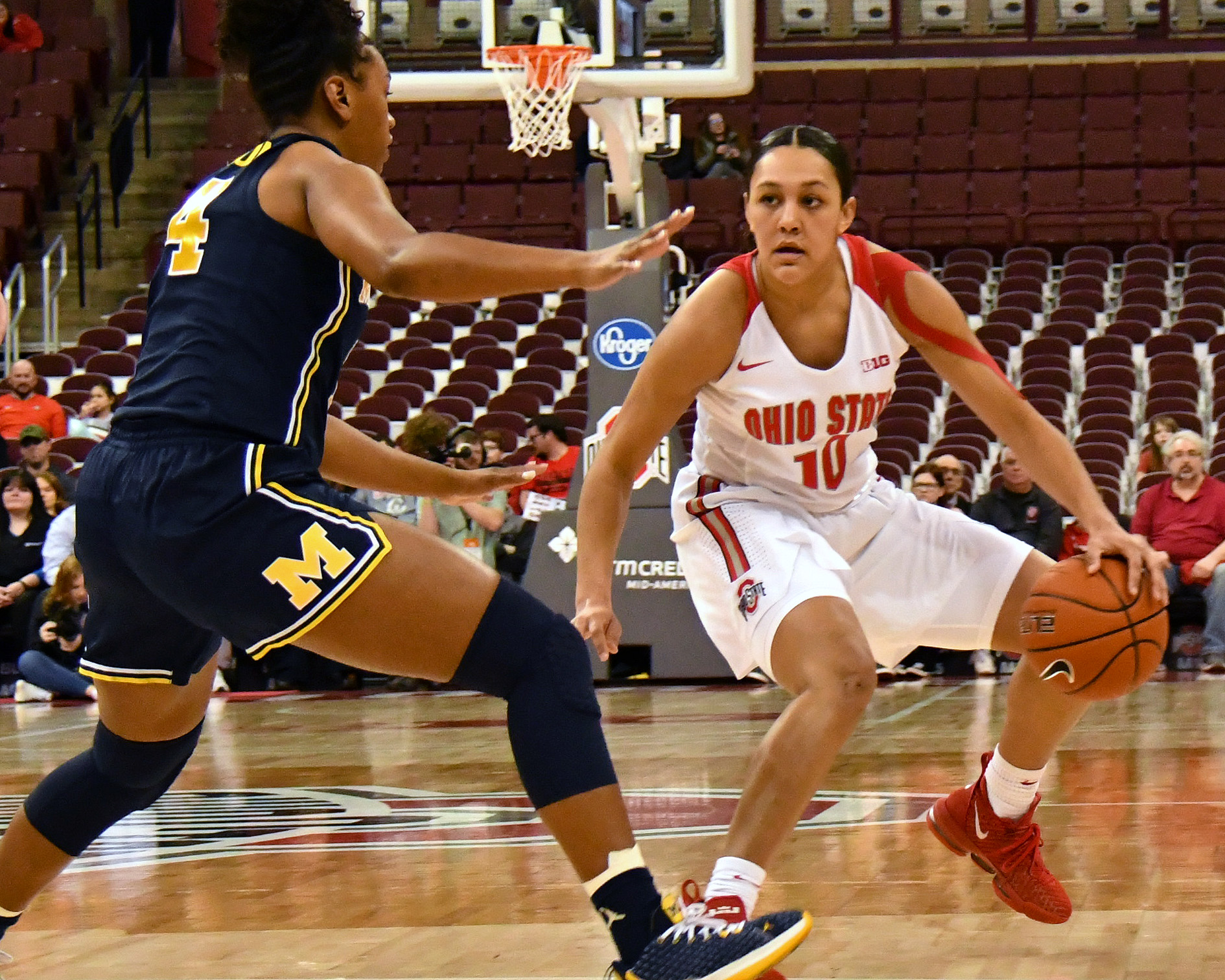 Ohio State finished off its stretch of three straight ranked Big Ten opponents against rival Michigan, who had come into the game with back-to-back 30-point wins.

The Buckeyes took down the Wolverines behind a dominant fourth quarter, defeating No. 24 Michigan 78-69.

Michigan held a 61-59 lead in the fourth quarter, but Ohio State went on an 11-1 run to go up eight with 2:25 to play, capped off by a second-chance bucket by freshman guard Kierstan Bell and a layup by freshman guard Madison Greene.

Michigan attempted to rally with five straight points to cut the deficit back to a one-possession game, but Greene hit another big shot, and then one final contested layup with 27 seconds to go, to officially allow Ohio State to hold on for the win.

“She’s just growing by leaps and bounds right before our eyes, and she’s a great kid, she’s a really high-character kid, and just tonight her performance in a game of this magnitude was just incredible,” Ohio State head coach Kevin McGuff said of Greene. “I see her play really well in practice, but tonight she was spectacular, she really was. She showed a lot of poise, and she ran the team, and she made sure that the ball kept moving and kept everybody organized, and then she made shots.”

Greene earned her third-straight start for Ohio State, and was huge for the Buckeyes all night. She finished with a career-high 23 points on 8-of-10 shooting in 36 minutes of play.

“It means a lot,” Greene said. “It feels really good just to have this performance in front of a lot of, like I know a lot of these people here, family and friends, it’s really huge, and in a big game, too with Michigan, it’s really exciting.”

After scoring just five points in the loss against Maryland, Bell came back in a big way, scoring 15 points, and adding six rebounds and three assists.

Three-point shooting and turnovers have been two major issues for Ohio State for much of the season, and the team managed to improve dramatically on both fronts, finishing hitting 50 percent from deep (11 of 22), and only turning the ball over nine times.

“That certainly was the key,” McGuff said on the turnovers. “We really did a good job taking care of the ball, and they have a good press, very active, and I thought our execution against their pressure was really critical tonight.”

Rebounding was an area of struggle for Ohio State, with the Wolverines holding a strong advantage over Ohio State, 39-24, in that category.

Sophomore forward Naz Hillmon was a major reason for the difference, and was problem all night for the Buckeyes, finishing with a game-high 24 points and 15 rebounds on a perfect 8-of-8 shooting night.

“She’s a great player, she plays as hard as any post player in the country,” McGuff said.  “I said ‘Hey, if we’re going to let her dominate in the second half, we’re not winning, so it better start with better defense.’

Junior guard Braxtin Miller had a strong performance for the Buckeyes, ending the game with 13 points on 6-of-12 shooting, including making her only three attempt. She had missed 28 of her past 29 attempts from deep before the make.

Miller said getting the shooting down, both with her and the team on the whole, is key moving forward.

As has been the case all season long, Ohio State relied on its depth to gain an advantage, outscoring the Wolverines 28-6 in bench points.

Ohio State trailed Michigan 38-35 at halftime, despite only turning the ball over four times and shooting 7 of 15 from three. The problems came from rebounding, where the Wolverines outgained the Buckeyes 25-10 over the first 20 minutes.

Greene led Ohio State with 12 points on a perfect 4-of-4 shooting at the break.

Ohio State moves to 9-6 on the season and 2-2 in the Big Ten, and stays at home for a 2 p.m. Sunday matchup against Penn State. Greene said a win like this could be the one to help stop the inconsistencies within a team that has now alternated wins and losses for the past seven games.

“It was very important,” Greene said. “We’ve been kind of up and down this whole season, but it feels really good to get this big win.”