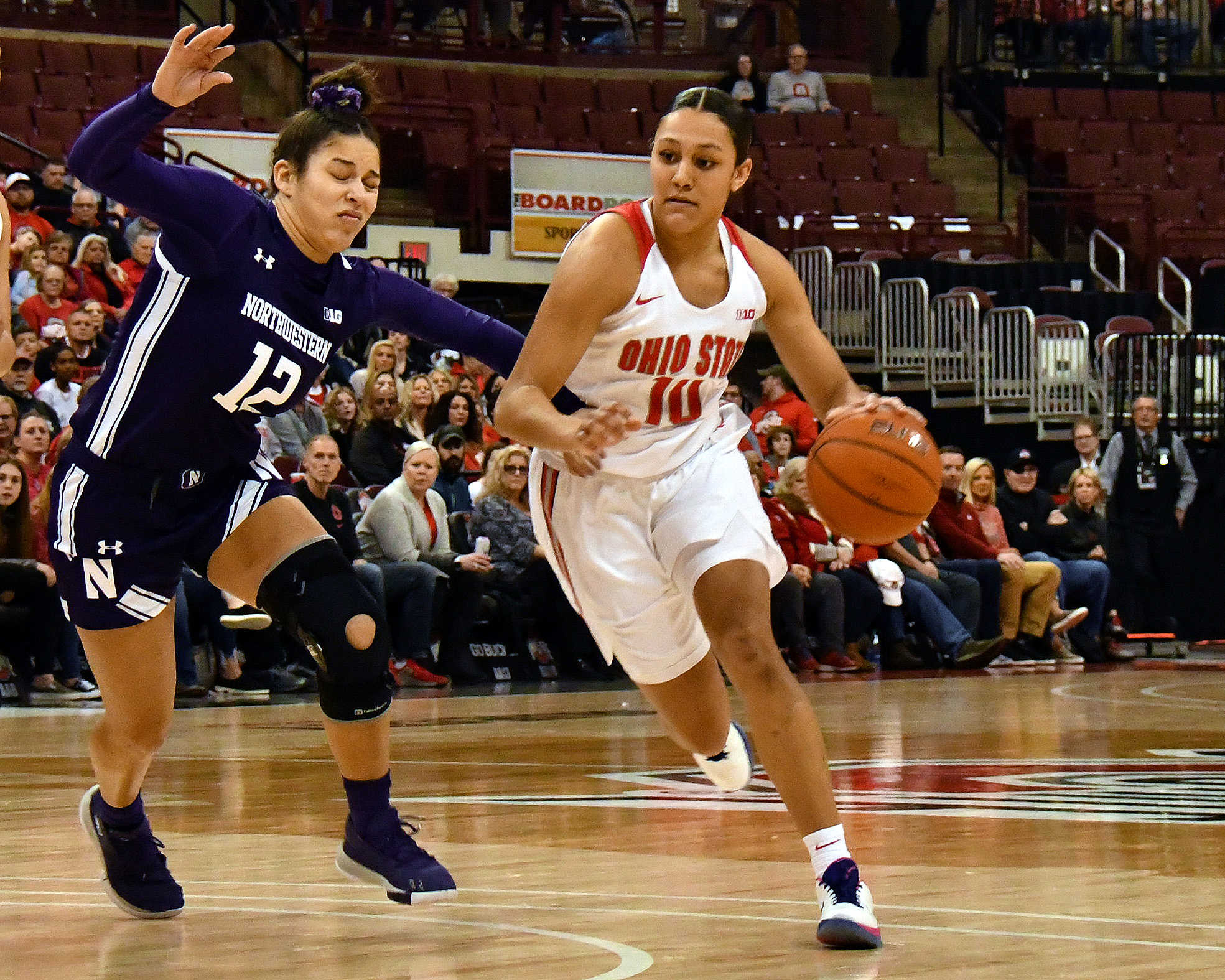 Ohio State was given a tough task on its senior night, going up against the No. 14 team in the country in Northwestern.

After a tight battle for much of the game, it was the Wildcats that went on a big run at the end of the third quarter to pull away from the Buckeyes, handing Ohio State its second straight loss with a score of 69-55.

With 3:46 to play in the third, the Buckeyes trailed by just one, 44-43 after a basket by sophomore forward Aaliyah Patty. But Northwestern took off from there, going on a 12-2 run to end the frame, capped off by a deep buzzer beater three by junior guard Lindsey Pulliam.

The Wildcats never were up by less than double digits the rest of the game.

The reigning national player of the week hits a deeeeep three at the end of the third to put Northwestern up 56-45 on Ohio State. pic.twitter.com/qZ4TPqe9Ol

Pulliam, fresh off winning NCAA Player of the Week, struggled a bit shooting from the field, but still ended the night with 16 points on 4-of-14 shooting. She did most of her damage at the free throw line, hitting 7 of 9.

“She’s a great player, one of the best in the country,” Ohio State head coach Kevin McGuff said. “You’re not going to stop her, but you have to try and slow her down. I thought we did a decent job making her score over us, but she’s really an excellent player and really hard to guard.”

Ohio State opened the game with a 7-3 lead, with all seven points coming from Dorka Juhasz. The sophomore forward ended the game with her third straight double-double, 15 points and 12 rebounds, in 32 minutes of play.

After taking a 19-17 lead into the second quarter, the Buckeyes began to hit a shooting slump, not making a shot for the final 4:33 of the first half.

“We have to give them credit because their zone is really funky,” Juhasz said. “Obviously we had some open looks and we just couldn’t make it, we weren’t focused enough to get in the key and we couldn’t get the offensive rebounds back.”

Freshman guard Jacy Sheldon was a bright spot for Ohio State during the slump, scoring, like Juhasz, seven straight points, this time coming at the end of the half. Sheldon finished with 12 points and a pair of steals.

The shooting did not get better for the Buckeyes to open the second half, going another 3:06 without a field goal. But it wasn’t until that Northwestern run late in the frame that the lead was pushed to double digits.

Pulliam had a strong game, but it was senior forward Abi Scheid who made the different on offense for the Wildcats. Scheid, the nation’s top three-point shooter coming in at 48.1 percent, hit 7 of her 11 shots and 5 of 7 from deep for a game-high 19 points.

The fourth quarter held more shooting problems, with Ohio State playing the first 7:44 of the frame without a basket.

“We need to make easy shots, because I think a lot of shots we just miss under the basket and our shot selection is not always the best choice,” freshman forward Rebeka Mikulasikova said. “Sometimes we wait until the last second and then we don’t take the right shot.”

Freshman guard Kierstan Bell, who missed the previous game against Rutgers, also missed tonight’s matchup despite warming up normally with the team.

“She was away last weekend and in a good place coming back,” McGuff said. “We just wanted to make sure we didn’t rush her back out there, but I think we’re in a good place moving forward.”

The lone senior on the team, forward Savitha Jayaraman, was put into the game with 43.8 seconds to play, her first game action of the season. She missed a late three-point attempt.

Ohio State plays its final game of the regular season Saturday at 4 p.m. on the road against Purdue.

“It’s really hard to play there,” Juhasz said. “I remember from last year it was a really hard game, so we just have to look forward and we have to have great practices in the next few days.”