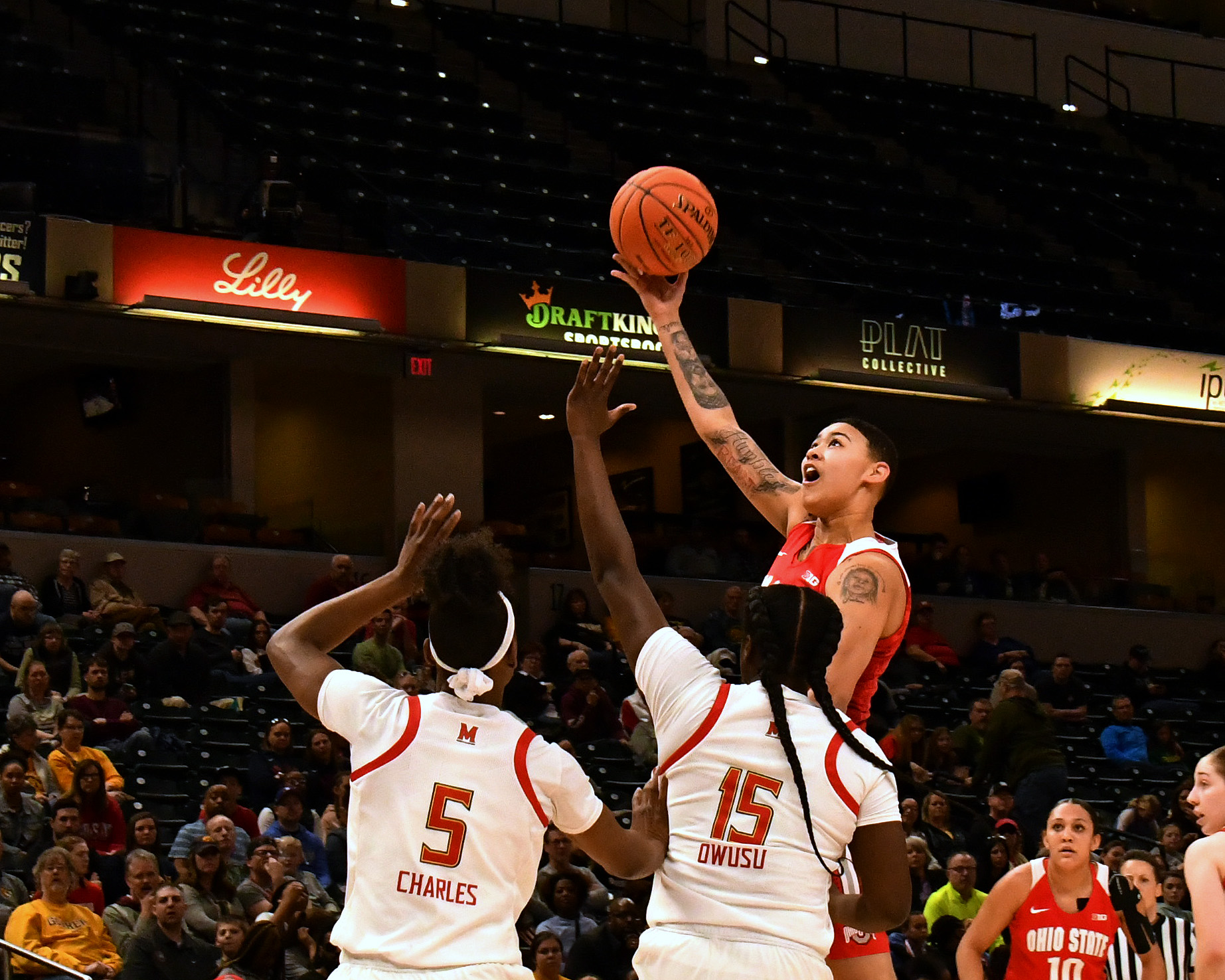 After a remarkable run through the Big Ten tournament, Ohio State fell short of becoming the lowest seed to win it, losing to top-seeded Maryland in the final 82-65.

The Buckeyes led early, but the Terrapins, who are ranked No. 4 in the country, slowly took over with suffocating defense and rebounding, each of which translated to the offensive side of the ball.

“They were getting points and transitioning off turnovers and in second chance points, and that really hurt us,” head coach Kevin McGuff said. “But in general, I’m really proud of our team. We fought and scratched and we had a great tournament. Give credit to Maryland, they’re terrific, really good. I think they got a chance to make a special run in the NCAA tournament, and that’ll be fun to watch.”

Though Ohio State did manage to score 22 points in the first quarter and start the game hitting 11 of 21 attempts from the field, the offense slowed in the second and third frames, hitting just 6 of 30 attempts for 24 total points.

“They’ve done a great job this year with their defense,” McGuff said. “They mix their defense up, they just make it really tough on you to generate quality shots and they’re long and athletic, so they can switch a lot of things.”

Sophomore forward Dorka Juhasz led the Buckeyes with 20 points on the night, shooting 8 of 18 from the field. The second-year forward was selected as one of five players on the Big Ten All-Tournament Team.

“They have great upperclassmen leaders. And they’re very aggressive,” Juhasz said. “They forced some turnovers and you can see that we were down on the boards by I don’t even know how much a lot. So they were really aggressive.”

Ohio State trailed Maryland 38-29 at halftime, with a 25-13 rebounding advantage in favor of the Terrapins being the key difference.

Also making the difference for the Terrapins were freshman guard Ashley Owusu and senior forward Stephanie Jones. Owusu finished the opening 20 minutes with 11 points, five rebounds and six assists, while Jones led Maryland with 14 points and six rebounds on a perfect 5-of-5 shooting.

Jones and Owusu continued to be the main points of the Terrapins’ offense, with the senior forward finishing with 18 points and 10 rebounds, while the first-year guard ended with 17 points, six rebounds and 11 assists. Both players finished as selections to the All-Tournament team, while Owusu was named the Most Outstanding Player of the tournament.

“They’re a great, great team with a lot of great players,” freshman guard Jacy Sheldon said. “They’re great in transition. They’re really aggressive on the boards, and they are really deep too. So they’re a great team overall.”

Sheldon was one of three Buckeyes in double figures, finishing with 11 points and five rebounds. Besides Sheldon and Juhasz, freshman guard Kierstan Bell also ended with 13 points, six rebounds and five assists.

Ohio State started the game up 7-3, and ended the first quarter with a two-point advantage thanks to 10 early points from Juhasz. But a 24-13 Maryland advantage in the second quarter started the momentum that eventually led to the 17-point Terrapins victory.

Ohio State ends the Big Ten tournament with a 21-12 record, and will now await its fate in the NCAA tournament, with the selection show taking place on March 16.