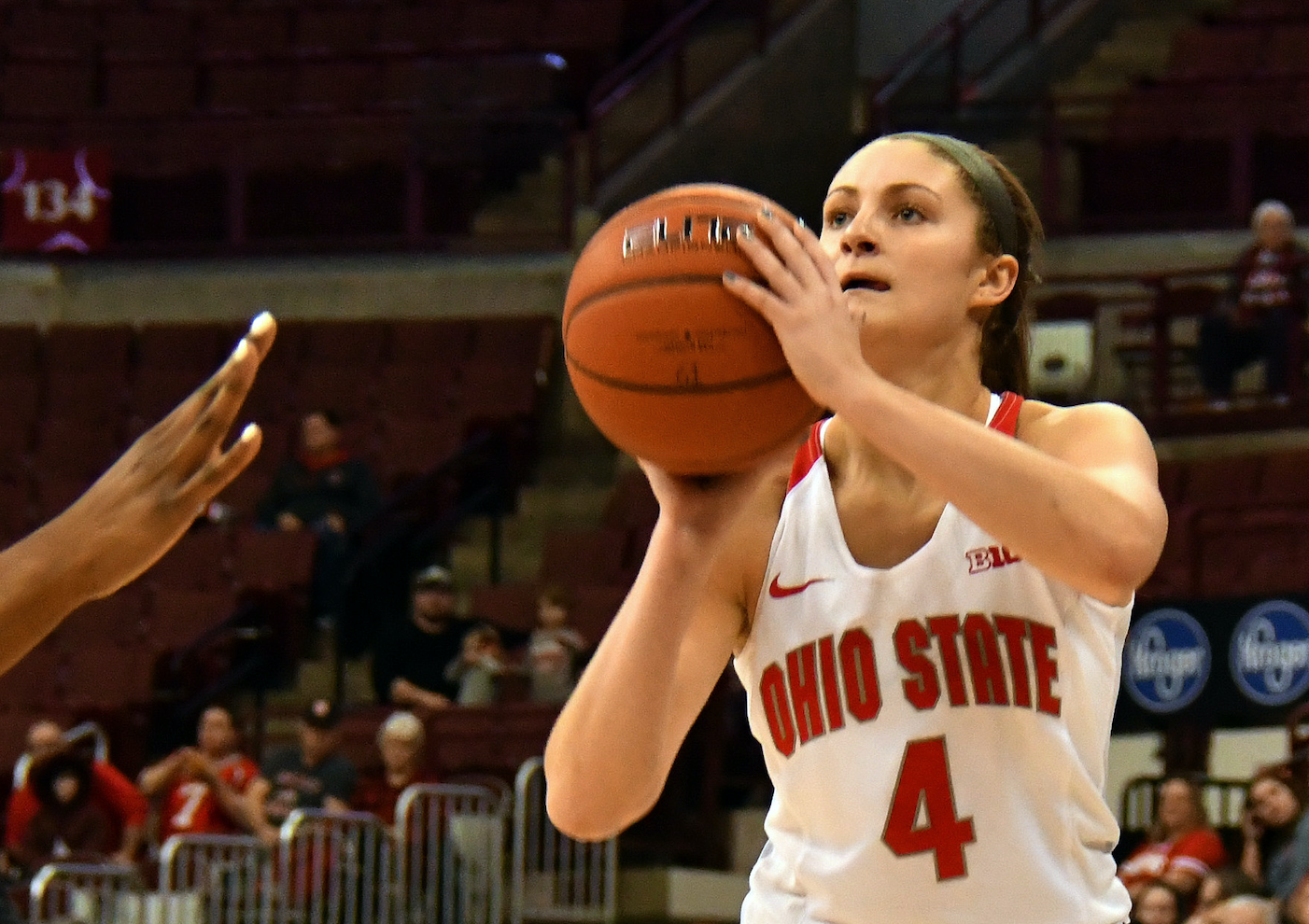 Ohio State has been searching for consistency. It was less than 25 seconds away from getting closer to that, earning a third straight win heading back home.

Instead, in a very back-and-forth game that came down to the final possession, it was Michigan State that bested Ohio State 68-65 to stay undefeated at home on the season, while the Buckeyes had their two-game winning streak ended.

“I thought we just, for stretches in the game, we allowed them to get to the paint, whether it be off-ball screens or just straight line drives, and when they did, they really made us pay,” Ohio State head coach Kevin McGuff said. “When we guarded the ball, I thought we had the game where we wanted, but we just didn’t do it enough tonight.”

After taking a five-point lead into the second half, Ohio State allowed Michigan State to get out to a 20-7 run to open the third quarter, only scoring one lone basket over the first 8:03 of the quarter.

But the Buckeyes only trailed by four heading into the fourth thanks to a trio of layups, two of which by freshman forward Rebeka Mikulasikova.

After again taking a large lead, this time by nine with 7:51 to play, the Spartans again let Ohio State come back, which the Buckeyes did, using a 9-0 run to tie the game with 4:42 to go.

The team’s then traded threes, with Mikulasikova burying an open corner three with 2:55 to play to tie the game at 61.

Mikulasikova finished the game going 4 of 4 from the field for 11 points in 13 minutes off the bench.

Again tied at 63, both the Spartans and the Buckeyes went cold down the stretch, until freshman guard Madison Greene, the hero of Ohio State’s victory over Michigan, went to the free-throw line with 23.8 seconds to go.

Greene hit both — her ninth and 10th points of the game — to give Ohio State the lead late.

Sophomore guard Nia Clouden, Michigan State’s leading scorer coming in, did not shoot the ball well early,  shooting 0 for 6 in the first half. But she was a key in the second half for the Spartans, ending the game with 20 points, three of which came with a clutch and-one with 13.4 seconds to go to give MSU the one-point lead.

“I think the biggest thing is we needed to get a stop,” McGuff said. “I mean Clouden drove the ball and got it too deep on the other possession, and that’s where we should have won the game.”

Clouden then hit two more free throws, and when a desperation three from freshman guard Jacy Sheldon didn’t fall, it kept Michigan State perfect at home, moving to 8-0 with the win.

“We quit guarding the ball,” McGuff said. “I mean she’s really good, you allow her to get to the basket, she’s going to make you pay and she did tonight.”

The Buckeyes led 31-26 at halftime, much in thanks to Sheldon, who hit all four of her shot attempts, three of which were from behind the arc, for a game-high 11 points. As a whole, Ohio State shot 5 of 10 from three in the opening 20 minutes, while Michigan State only attempted four from deep, hitting just one.

Sheldon went scoreless, and the Spartans hit 5 of 8 from deep,  in the second half.

At halftime, Ohio State’s No. 1, 2 and 4 scorers on the team — sophomore forward Dorka Juhasz, freshman guard Kierstan Bell and junior guard Braxtin Miller — went a combined 0 for 15 from the field, including seven misses by Juhasz. The rest of the team shot 13 of 19.

“They were good defensively, and we weren’t executing really well, so that’s a bad combination,” McGuff said.

The Spartans’ No. 2 scorer, senior guard Taryn McCutcheon, who was playing with a fractured index finger on her dominant right hand, stepped up despite the injury. She finished with nine points, seven assists and a pair of steals.