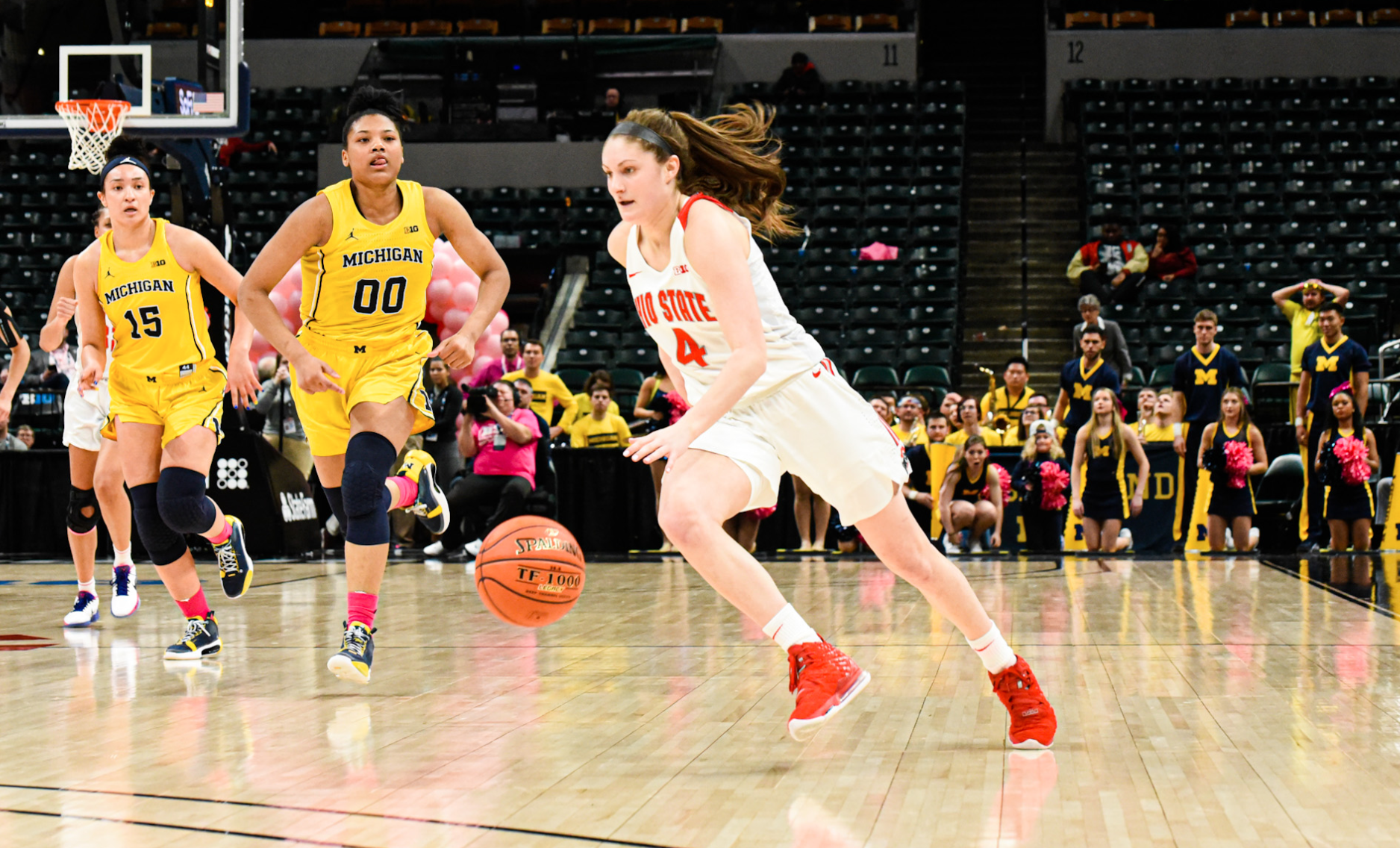 As part of end-of-the-season women’s basketball coverage, Buckeye Sports Bulletin will be looking at the previous year of every returning player for Ohio State heading into the 2020-21 campaign, and their importance to the future of the Buckeyes. Next in the series is guard Jacy Sheldon.

That leaves Jacy Sheldon, a guard out of local Dublin Coffman, who was edged out for Ms. Ohio Basketball by Bell despite some of her own monstrous numbers.

Sheldon didn’t come in with quite the same buzz as Bell, but she came in nearly as accomplished, and showed a ton of maturity for a first-year player. Because of this surprising maturity, Sheldon found her way into the starting lineup for the first time against South Dakota on Nov. 29, and then permanently for the final 21 games of the season.

This led to Sheldon finishing her first collegiate season with 9.6 points per game while shooting 48.3 percent (117 of 242) from the field and 34.6 percent (44 of 127) from three, all numbers that were good for third best on the team.

Her 79.6 percent clip from the free-throw line and 45 steals on the season were both No. 2 on Ohio State’s current roster.

Though Sheldon’s first season included more consistent output than a couple flashy performances, she still managed to shine through at points during conference play. This was most noticeable in a pair of consecutive games against Minnesota and Indiana on Feb. 13 and 16, where the first-year guard scored 19 and 16 points, respectively.

Between those two games, Sheldon shot a combined 13 of 18 (72.2 percent) and 5 of 9 from three (55.6 percent) against the Gophers and Hoosiers, both of which were wins for the Buckeyes.

Sheldon also played some of her best basketball at the end of the season, where she scored in double figures in each of her final six games. Four of those games came in the Big Ten tournament, where she tied Dorka Juhasz for the team lead with 12.8 points per game on 52.6 percent shooting and 36.8 percent shooting from deep.

Sheldon had a season that should have been rewarded with a Big Ten All-Freshmen Team spot, even if she ended up missing it. She was the most consistent freshman Ohio State had, and continued to grow into her role on both sides of the ball.

I can’t imagine many freshmen finished in the top three on their team in minutes, but Sheldon did that (27.3 MPG), and she did that because she played above her class in a lot of aspects of her game.

Ohio State does not have a better finisher in transition than Sheldon, who consistently found layups on fast breaks, either through steals of her own making or by taking advantage of players not getting back fast enough. This ability allowed Sheldon to lead the Big Ten with 1.287 points per possession in transition, according to Synergy Sports U.

This also led to Sheldon’s impressive 63.5 percent success rate from inside the arc, many of those shots coming around the rim. Though I had watched the high school tape on her, this was the part of her game I was not 100 percent sure would translate to the college game. I was wrong, and she was consistently impressive when she was given a lane to the hoop.

Sheldon seems unfazed by contact, or pressure, when going for a layup, and she made contested shots at the rim like this much more often than not.

What I thought would be Sheldon’s strongest asset was her three-point shooting, and while it was a solid year for the freshman guard from deep, the 34.6 percent rate wasn’t as eye popping as I expected it to be.

On purely a shooting mechanics standpoint, Sheldon has the best form on the team, and had a knack for making it always look like her attempts would go in, even on ones that hit the rim.

There was nothing that seemed particularly off from her shooting at any point in the season, and I imagine as Sheldon’s confidence and experience continue to grow that she can get her three-point percentage up to numbers that can contend for the Big Ten lead.

Jacy Sheldon showed off a wide range of skills, all of which can continue to be improved, and all of which make her a potential star-caliber player. Her effort and craftiness in transition was unmatched in the conference this season, and her three-point ability is clear, and will only improve in the coming seasons.

There is not a clear weakness in Sheldon’s game, with her only flaw really being that she could be a little more aggressive in her shot selection, and that adding more of a passing game (1.5 APG) to her repertoire could help the offense as a whole.

As is, Sheldon had a very impressive first season and got a ton of experience under her belt, and should continue to be a starter for the remainder of her time at Ohio State, with the potential to really come into her own as a top-tier guard.