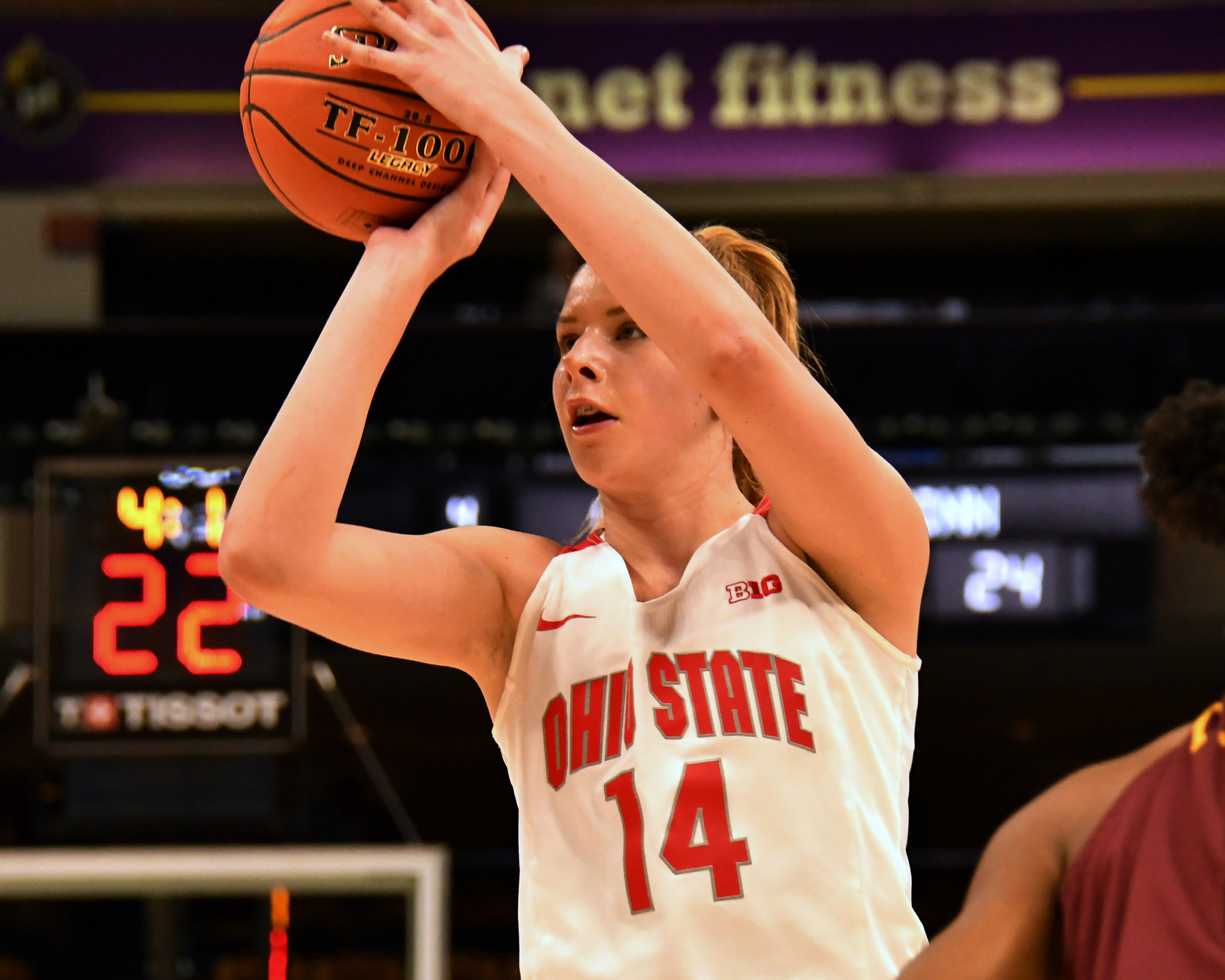 As part of end-of-the-season women’s basketball coverage, Buckeye Sports Bulletin will be looking at the previous year of every returning player for Ohio State heading into the 2020-21 campaign, and their importance to the future of the Buckeyes. Next in the series is forward Dorka Juhasz.

Ohio State prided itself on being a team that had no clear star, and that it was a dangerous team because any one of its major contributors can threaten to have a big game at any time.

This is partially true, with all eight key members of the rotation averaging between 13.2 and 6.8 points per game. But, if anyone were to pick the top contributor of the Buckeyes roster, for the second straight season the answer is forward Dorka Juhasz.

Juhasz ended her sophomore season much like she did her freshman campaign, leading the team in both points and rebounds. In her first year with Ohio State, she did that by averaging 11.7 points and 9.0 rebounds per game while shooting 45.8 percent (119 of 260) from the field.

The second-year forward out of Pecs, Hungary improved in every major statistic, averaging 13.2 points and 9.4 rebounds per game and hitting on 47.6 percent (160 of 336), while also increasing her steals and blocks to more than one per game (1.2 per game for both) and cutting her season total in turnovers from 61 to 49.

But the biggest, and most surprising, improvement to Juhasz’s game came from behind the arc.

After a freshman season where she made just 18 of 71 of her shots from three, good for a 25.4 percent clip that was third worst on the team among players with multiple attempts, Juhasz turned that around and hit 39.6 percent (40 of 101) of her looks from three, second best behind freshman forward Rebeka Mikulasikova (46.3 percent).

That high rate only went up as the year progressed. Juhasz hit just 32.4 percent of her attempts from behind the arc in nonconference play, but hit 43.8 percent while battling a brutal Big Ten schedule.

Another big statistic that increased for Juhasz as her second season in the program went on was free-throw shooting. Juhasz jumped from hitting 37.8 percent of her free throws to 67.3 percent during conference play, a shift that the sophomore forward credited to simply gaining her confidence back when getting to the line.

For the season, Juhasz scored in double figures in 22 of the 33 games, and had 10 or more rebounds in 14 games. Combined, she had 11 double-doubles, including six in her final eight games.

She broke the 20-point plane five times, a few of those in wins against much lesser opponents (27 vs. Sacramento State, 21 vs. Radford, 23 vs. Penn State), but two came in valiant efforts to strong opponents.

Juhasz dropped 22 points and 16 rebounds on 7-of-15 shooting in a Jan. 23 loss to Iowa, and scored 20 in what would be Ohio State’s final game of the season: An 82-65 loss to Maryland in the Big Ten Tournament final. She also led the Buckeyes with 15 points and seven rebounds on 6-of-9 shooting in their upset win over then-No. 2 Louisville.

Juhasz took a very strong freshman season and improved, even if only slightly, in every single facet of her game. And, maybe more importantly, she continued to improve as the season progressed.

As Ohio State collectively began to grow more comfortable from three, Juhasz used the extra space to make an impact down low, which was shown by the sophomore bringing in three or more offensive rebounds in eight of her final nine games.

Ohio State’s leading scorer became a double-double machine late, and should only continue to do that with the amount of talented guards the Buckeyes still have on the roster. And, even without her impressive presence in the paint, Juhasz became one of the best three-point shooting forwards in the conference, a skill that looked night and day from her first year behind the arc.

If there’s an area to still grow at, it would be free-throw shooting, where Juhasz finished the season at a 53.2-percent rate, despite the drastic improvement throughout the year. And for as strong as Juhasz is down low, there are some occasional missed finishes around the rim that led to her shooting 53.3 percent from two despite almost strictly shooting from close range.

The Buckeyes may enjoy not having a particular star like a Lindsey Pulliam at Northwestern or Arella Guirantes at Rutgers that the team has to rely on for scoring night in and night out. But, if Ohio State needed to have someone deliver, Juhasz is that player, as she has all the tools to continue to build on what was already recognized as a First-Team All-Big Ten season in just her second year with the program.